A Border Patrol agent is dead and another hospitalized following something along the Texas border. Agent Rogelio Martinez was killed Sunday near Van Horn, a town of about two thousand, a few hundred miles east of El Paso. What is known … really isn’t much, and the lack of information is disturbing. The FBI and CBP say Martinez and his partner were responding to “activity” but declined to reveal exactly what that means. They’ve not released a timeline of what happened, something a spokesperson told the San Antonio Express-News would happen today. The FBI does say the agents weren’t shot but that’s it. Nothing else.

The National Border Patrol Council is commenting on what they believe happened but their comments are causing a lot of confusion. Get ready for a bouncing ball, folks, because it’s gonna get interesting.

Here’s what a union spokesperson told ABC-7 in El Paso.

Union Spokesman Chris Cabrera told ABC-7 Martinez was responding to foot traffic that set off sensors when he came across a group of individuals.

NBPC President Brandon Judd made similar comments to Breitbart Texas and swore it was another example of why the border needed to be secure.

But then the language from the union started to change and muddy the waters a bit. Here’s the statement they put out Sunday.

As of this writing, the cause of this tragedy is not being reported as this situation is unfolding and an active investigation is underway. Various local and federal authorities are on scene to assist with the investigation and to search the area for any suspects or witnesses.

Judd also started couching his words when he spoke with more traditional outlets. Here’s part of his talk with Fox News.

We don’t know exactly what happened because we weren’t there. However, just from agents that were working in the area, reports are saying it was an attack and it would appear to be an ambush.

He gets more hesitant in The Washington Post (emphasis mine).

“I have been told by several agents that it was a grisly scene, and that his injuries were very extensive,” Judd said Monday in a phone interview with The Washington Post. “We believe he was struck in the head with rocks, or multiple rocks.”..

“I have not heard (the injured agent) has regained memory of what happened,” Judd said. “So there is a possibility they were together when this happened, but we’re getting a lot of different information from different agents.”

It’s completely possible the initial details into Martinez’s death will indicate a rock attack by people who came across the border. But there’s also the chance the story will keep changing and and potentially reveal a new motive and perpetrator. CBP is preparing for that possibility. Via the Associated Press:

(A) U.S. border patrol official says so-called reports of an attack were “speculation” as of Monday evening, according to a report from the Associated Press.

U.S. Customs and Border Patrol official Rush Carter says all the agency can confirm is that the two agents were injured and that a joint investigation with the FBI will hopefully determine how that happened.

Remember, sources originally claimed it was the brother of the Newtown shooter who committed that horrific tragedy before having to issue corrections. There’s still confusion on what actually happened in Las Vegas because law enforcement buggered their timelines up, and a motive is even more elusive. People railed about what happened in Sutherland Springs, and the availability of guns, before it turned out the current laws on the books would have worked if the Air Force hadn’t royally fracked up.

So I’m a little hesitant to place blame on illegal or undocumented or whatever the right term is these days depending on your political alignment immigrants. If Martinez died in an attack then whoever did it is a criminal and will hopefully be caught, and soon. But jumping to conclusions on a tragedy won’t help anyone or anything, especially Martinez’s grieving family. Let’s get a clearer picture and go from there.

Fauci: Let's face it, some Trump fans don't like me because I insist on truthbombing them
Allahpundit Jul 23, 2021 8:01 PM ET

National Review: Democrats had the full list of phone tips on Kavanaugh during the confirmation
John Sexton Jul 23, 2021 7:30 PM ET 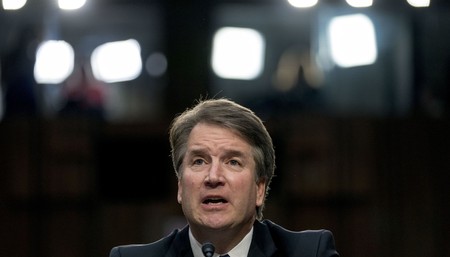 Should the Olympics have required all athletes to be vaccinated?
Allahpundit Jul 23, 2021 6:41 PM ET