Former Boston Red Sox pitcher and ESPN baseball analyst Curt Schilling hurled some high, hard ones at his former employer and some of his colleagues Wednesday in an appearance at “Breitbart News Patriot Forum” on Sirius XM (SoundCloud below).

Alex Marlow, host of the satellite radio program, asked Schilling about what it was like to move from professional sports, “the ultimate meritocracy,” to ESPN where he was “told what to say and how to say it.” Schilling responded, “I think it was much more a matter of being told what I can’t say.

He then went on to describe the climate behind the scenes at the sports network for anyone who may be right of center, politically:

“One of the things I got early on, people would walk up to me… We had the green room in ESPN, which I kind of turned it into a locker room where everything was on the table, you could make fun of anybody’s mom and all the things that go with that, like in a baseball locker room. But I had people come up to me and go [whispering] ‘Hey, I’m with ya. I’m a Republican, too.’  It was like a deadly serious thing, like, we didn’t talk… like religion on the table was a much easier discussion than who you voted for.”

Schilling also claimed that when the discussions at ESPN turn to racial matters, he’s heard comments that would make David Duke blush.

There’s surely plenty of evidence to support that assertion.

Pardon the Interruption co-host and NBA analyst Michael Wilbon famously said, on the air, that he “use(s) the N-word all day, every day, my whole life.”

And let’s not forget NFL analyst Rob Parker who questioned whether Redskins quarterback Robert Griffin III was authentically black because he votes Republican:

My question, which is just a straight, honest question, is … is he a ‘brother,’ or is he a cornball ‘brother?’ He’s not really … he’s black, but he’s not really down with the cause. He’s not one of us. He’s kind of black, but he’s not really like the guy you’d want to hang out with. I just want to find out about him. I don’t know, because I keep hearing these things. He has a white fiancé, people talking about that he’s a Republican … there’s no information at all. I’m just trying to dig deeper into why he has an issue.

How about writer Jamele Hill who was suspended for comparing the Boston Celtics to Hitler?

Wilbon’s co-host on PTI, Tony Kornheiser compared the tea party to Islamic terrorists saying the grass-roots conservative group was “like ISIStrying to establish a caliphate here,”

But Schilling is the one who lost his job. And he lost it for posting a picture on his personal Facebook page. Take a look at the picture and judge for yourself.  Schilling gets fired for that, but Wilbon and Kornheiser keep their jobs.

Is there any doubt there’s an anti-conservative bias at ESPN?

"My time is up": Noah announces Daily Show departure one day after ripping Biden
Ed Morrissey 8:31 AM on September 30, 2022 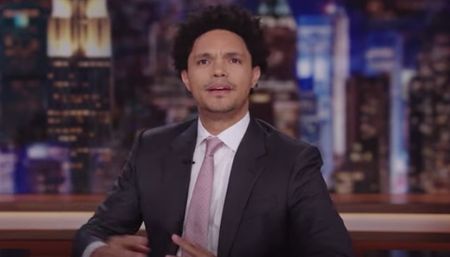