Do dogs in San Francisco get stoned from eating human poop? (Update)

I came across this thread today on Twitter. The author, Michelle Tandler, is a former resident of San Francisco who has since moved to New York. She still posts tweets critical of San Francisco fairly often and one thread in particular caught the attention of a journalist at the San Francisco Examiner who was apparently working on a story about anti-San Francisco social media accounts. More on that in a moment but first, here’s the thread which caught the reporter’s attention. As you’ll see, it opens with a story someone at a party told about dogs in San Francisco getting high by eating human feces:

This woman shared her story to a small crowd, so someone piped in.

"I left San Francisco after my second child got punched by a homeless man wielding a liquor bottle."

The third person in the group said "we left San Francisco after my business got robbed the 15th time."

I feel safe in New York to walk alone, at night, essentially everywhere.

I can walk without scanning the sidewalks for glass and trash.

People are so friendly to me — construction workers often say hi to me when I pass.

The energy is just more positive.

He said he could not believe how fast they came, and that they actually seemed to care.

Apparently SFPD either didn't come, or didn't do anything about his chronic robberies. Even when it was the same person robbing them again and again.

That thread was one week ago. Jump forward to today and a reporter at the SF Examiner sent Tandler a notice that he was writing a column about her (and others). It was clearly not going to be a favorable column. “I spoke to a social media misinformation expert at UC Berkeley who did not have positive things to say about your approach,” he wrote.

That was soon followed up with another exchange in which the reporter made it clear he didn’t believe any of the people Tandler was describing even existed. 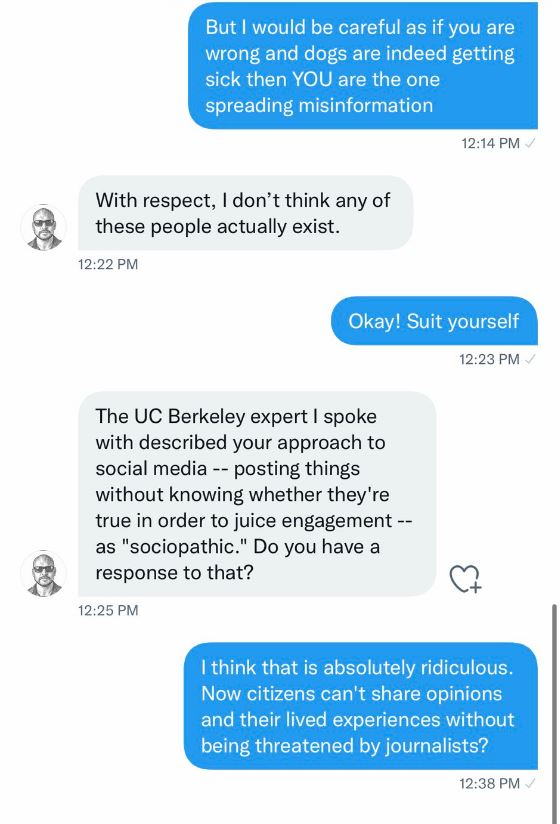 Again, he’s bringing up the UC Berkeley expert who is now calling her a sociopath because she’s posted stories critical of San Francisco. That seems a bit extreme to me and maybe even void of human empathy since he’s never even spoken to Tandler.

Anyway, I don’t know Tandler or the reporter in question but I’m definitely getting a bully vibe from him. I’ve written a lot of stories about the poop on the streets of San Francisco but I’ve never heard a story about dogs getting high from it. So I did a quick Google search to see if something like this could possible be true. I quickly turned up this story at NPR: “Legal Weed Is A Danger To Dogs. Here’s How To Know If Your Pup Got Into Pot” [emphasis added]

It all started on a Tuesday night, when I came home from work to an unmistakable absence. My brown-and-white pit bull mix, Maizey, wasn’t at the top of the stairs to greet me. Instead she was in her bed, shaky and confused.

When I tried to get her up, she stumbled, nearly falling over while standing still. Walking to the vet, she leaped like a puppy chasing imaginary balls.

Later, at the 24-hour veterinary clinic in San Francisco’s Mission District, the staff ran some tests and determined Maizey was in no immediate danger.

Instead, they wagered a guess that Maizey was simply high. On marijuana…

[Dottie] Black says dogs ingest marijuana by eating the remainder of a joint, or getting into someone’s edible marijuana, either at home, on the street or in parks.

Another unsavory source in San Francisco — and other cities with high numbers of people living on the streets — is human feces tainted with marijuana. This is, in fact, what we think happened to Maizey. She spent quite a bit of time in the park bushes the morning she got stoned.

Black and other veterinarians believe this particular problem is becoming more common in the Bay Area, as the homeless population grows.

That story was from June 2019. Was there anything more recent? Why, yes, there was. ABC 7 in the Bay Area published this story in March 2021: “Puppies sickened after eating meth, marijuana found in San Francisco’s Pacific Heights.” [emphasis added]

“I do know that someone I’m not familiar with gave her a treat. This was noon. By 3 or 4, she was completely almost catatonic,” said Mandell.

The dog, Georgia, was put on an IV and later released…

The San Francisco SPCA says half the cases they see of dogs eating marijuana or methamphetamines involves “unknown exposures,” meaning the pet ingests it out on the street or in a park.

Last November Newsweek published this one: “Vets Warn Owners of Dogs Getting High on Cannabis After Eating Feces.” [emphasis added]

Pet owners have been issued a warning after a study found that dogs may be getting high—and sick—from marijuana residue in human feces.

The study, written by two vets from the Australian state of Victoria, looked into historical cases of dogs exhibiting signs of what vets call marijuana toxicosis—negative health effects after exposure to the drug…

The researchers, whose paper was published in the Australian Veterinary Journal on November 16, studied more than 4,500 records from four animal hospitals in the city of Melbourne. They found 15 cases of dogs who had presented with signs of marijuana toxicosis and a suspicion that they had eaten human feces recently, based on either human observation or vet tests. The records were dated between January 2011 and December 2020.

According to the researchers, marijuana ingestion by dogs as a result of eating human feces is likely to be “an underreported phenomenon,” in part because people are not aware that THC—the psychoactive compound in weed—can pass into feces.

“Awareness of this as a possible source of exposure is important as there are health and safety considerations for the dog, their owners, and veterinary staff,” the study said.

None of this proves that Tandler was really at a party where someone said this or that the person she attributed it to even exists, but I think it does prove that her story about dogs eating poop and getting high is something that does really happen. In fact it has apparently happened enough in San Francisco that SF Animal Control and Bay Area vets know about it.

Tandler says the dog walker who told the story isn’t backing off though she didn’t give his name.

A few more DMs from people about this.

Perhaps a vet or two could weigh in? How common is this…?

I guess we’ll have to wait and see if the SF Examiner goes forward with the story calling Tandler a liar and a psychopath in light of this information.

About a half hour into our hike after our break he started slowing down and not wanting to walk. It got to the point where i was carrying him because he was wobbling so bad and his pupils were dilated. He wouldn’t drink or eat. I put him into the truck and noticed he was dribbling urine constantly and was falling asleep. My 1st thought was heat stroke or dehydration but we kept cool by the water and he had plenty to drink. His pee was clear for the most part. I got him home and he threw up human feces (so friggin gross) . I called the vet and they swore to me that it’s a marijuana overdose. I explained that there is no marijuana in the house so i don’t know where he could have gotten it. Apparently they’ve been seeing a lot of cases where a dog will eat human feces with enough THC on popular hiking or camping trails and overdose on it.