Yesterday, Vladimir Putin gave a speech at the opening of the Army-2022 International Military-Technical Forum, a military expo put on by Russia’s Ministry of Defense in Moscow. “I want to once again thank the Russian weapon producers for equipping the army and the navy with modern weapons,” he said. He added that “many of them are years, perhaps even decades ahead of their foreign counterparts.”

One of the weapons on display yesterday was a robot dog carrying a rocket launcher on its back. It looked as formidable as an AR-15 with a chainsaw bayonet.

Video of the M-81 robot-dog armed with an RPG-26 at the Army 2022 defense expo. https://t.co/rUnwoCMoyS pic.twitter.com/BEDjnwstN0

A spokesperson claimed the dog had all sorts of uses on the battlefield.

A spokesperson for the engineers who developed the robot told the Russian news agency that the robot can operate in civilian or wartime scenarios. It can travel through war-torn areas to deliver medications and survey the surroundings, the spokesperson said, and it can also move or fire weapons. RIA Novosti also reported in a post on Telegram that the robot can “be engaged in target designation, patrolling and security,” according to an English translation reported by Vice.

The robot can definitely operate in civilian scenarios. We know because this advanced prototype is a bit more off-the-shelf than it appears.

The dog’s frame is concealed by a black fabric coverall. While this may seem like an odd attempt at a tactical appearance, it is much more likely that is necessary to conceal the origin of the robot. Based on the location and shape of the robot dog’s ‘eyes,’ its silver color, and its overall form and proportions, it seems clear the robot being displayed is actually one for sale on Chinese marketplace websites.

Indeed, the dog itself bears a striking resemblance to Unitree Robotic’s UnitreeYushuTechnologyDog, which can be purchased online for as little as $2,700. As such, it seems pretty clear that the robot was not designed by the Russian manufacturer displaying it at the “Army 2022” exhibition, nor is it of a military grade of any kind.

Here’s a comparison which shows the original robot without the ninja suit. This thing is meant to be an expensive pet, not a weapon.

According to the description on AliExpress, it has an Infrared remote which means you have to be within about 30 feet to operate it. Not sure that’s going to be a huge advantage in a combat situation. It’s also not clear if this thing can actually aim the rocket on its back or what would happen if it actually fired it. Here’s an  advertisement the company put out for the dog last year.

Anyway, I’m looking forward to whatever Russia’s top weapons designers have to show us at next year’s expo. If they’re looking for another off-the-shelf weapons platform I came across this one. Just mount a machine gun to this and you’re golden. 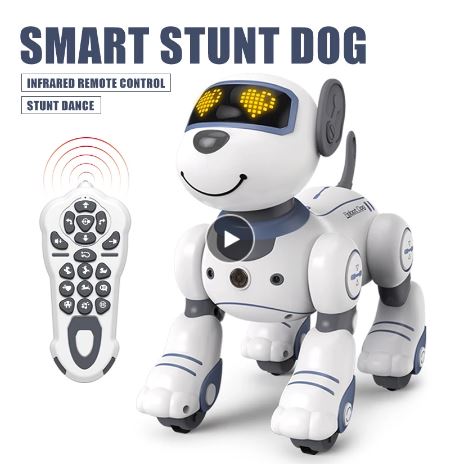