NY Times opinion: Dems should pack the courts to allow for 'broad readings of the Constitution'

What happened to all of those people worried about norms? I feel like we’ve heard a lot about norms in the past couple years from outraged Democrats. So where are the ‘norms’ people on court-packing?

NY Times’ opinion columnist Jamelle Bouie doesn’t bother trying to make a case that packing all of the federal courts up to and including the Supreme Court is an objectively good idea. Writing for progressives who read the Times, Bouie has a much lighter load to lift: It would benefit Democrats. Of course, you can’t pack the courts without first taking the White House and the Senate from Republicans, so this piece is really an argument for how to best abuse power once Democrats have it.

Democrats are left in an unenviable position. Should they win a federal “trifecta” — the White House, the Senate and the House of Representatives — they’ll still have to deal with a Trump-branded judiciary. It’s entirely possible that a future Democratic agenda would be circumscribed and unraveled by a Supreme Court whose slim conservative majority owes itself to minority government and constitutional hardball.

So what should Democrats do? They should play hardball back. Congress, according to the Judiciary Act of 1789, decides the number of judges. It’s been 150 years since it changed the size of the Supreme Court. I think it’s time to revisit the issue. Should Democrats win that trifecta, they should expand and yes, pack, the Supreme Court. Add two additional seats to account for the extraordinary circumstances surrounding the Gorsuch and Kavanaugh nominations. Likewise, expand and pack the entire federal judiciary to neutralize Trump and McConnell’s attempt to cement Republican ideological preferences into the constitutional order.

Bouie does make one passing attempt to claim this isn’t about progressive policy wins but it’s not very convincing.

The goal isn’t to make the courts a vehicle for progressive policy, but to make sure elected majorities can govern — to keep the United States a democratic republic and not a judge-ocracy. Yes, there are genuine constitutional disputes, questions about individual rights and the scope of federal power. At the same time, there are broad readings of the Constitution — ones that give our elected officials the necessary power to act and to solve problems — and narrow readings, which handcuff and restrict the range of our government.

He’s already established that this plan is founded on Democratic majorities so we already know which policies are set to benefit. As for the balance of individual rights and federal power, you can probably guess what a “broad” reading of the Constitution means. Hint: It’ll mean more federal power over individuals. Granted he’s not quite saying the courts should be a rubber stamp for progressives but, as he puts it, Democrats should make sure their goals aren’t hampered by Trump’s judges:

In other words, if everything goes right for their party in this best case scenario, Democrats will still face a hostile Supreme Court majority, with like-minded judges throughout the federal judiciary. They can beat Trump at the ballot box, but unless something is done about the judiciary, they will lose to him in the courtroom.

That something is to pack the courts. Yes, there’s the risk of escalation, the chance that Republicans respond in turn when they have the opportunity. There’s also the risk to legitimacy, to the idea of the courts as a neutral arbiter. But Trump and McConnell have already done that damage. Democrats might mitigate it, if they play hardball in return.

That last paragraph almost sounds like a joke. This plan could present a risk to the legitimacy of the courts. You think so? It’s like saying a wrecking ball could present a danger to nearby buildings.

I don’t think Bouie really believes this would “mitigate” people’s sense that the courts are too partisan. He’s smarter than that, but when you’re counseling agitated partisans to hit the gas and drive the car over a cliff like Thelma and Louise, it makes sense to also tell them to close their eyes.

In fact, what would certainly come next is Republicans responding in kind at the very first opportunity to do so. And somewhere around that time, a decade or so from now, I expect we’ll be hearing about the importance of norms once again. I wonder what transparently partisan arguments Bouie will offer then? Look for his column titled “Why the Supreme Court should have eleven Justices but never, ever thirteen” in a future edition of the NY Times. 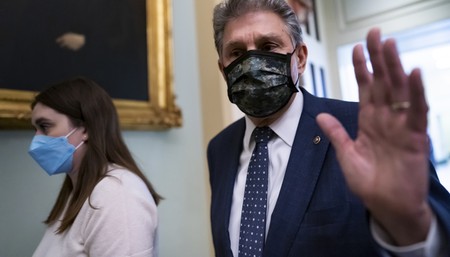