Hillary to CNN: I was never subpoenaed. Gowdy: Um, here's the subpoena

People “should and do” trust her, she insists, laughing off ugly polls on that very question. After all, why on earth would anyone doubt Mrs. Clinton’s veracity?  Shot:

“I’ve never had a subpoena.” 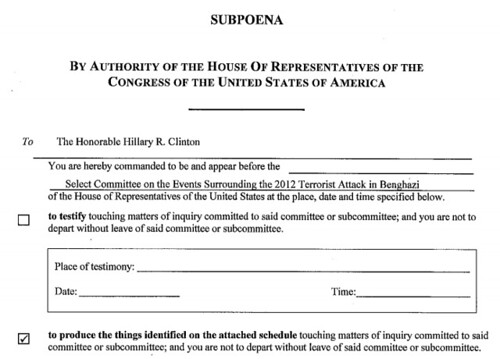 And what was the Select Committee requesting? 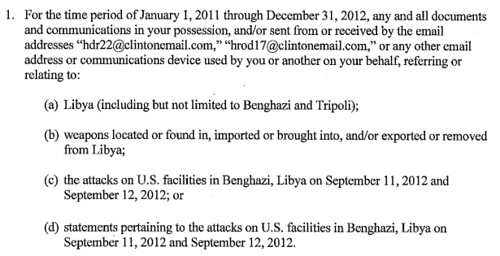 “Secretary Clinton had a statutory duty to preserve records from her time in office, she had a legal duty to cooperate and tell the truth with congressional investigators requesting her records, and she was personally subpoenaed the moment the Benghazi Committee became aware of her exclusive use of personal email and a server, and that the State department was not the custodian of her official record.  For more than two years, Clinton never availed herself of the opportunity, even in response to a direct congressional inquiry, to inform the public of her unusual email arrangement designed to evade public transparency. The State Department, which should have informed congressional investigators years ago, failed to do so either. The fact of the matter is it took the Benghazi Committee to uncover Secretary Clinton’s use of personal email and a server to conduct official State Department business. And it was Benghazi Committee inquiries that led the State Department to confirm Clinton failed to turn over all emails that should be part of her public record; that Clinton’s personal emails and server in fact do contain classified information; that her emails from Sidney Blumenthal were solicited; and that she used more than one device for electronic communication, undercutting her ‘convenience’ claim. With regards to Secretary Clinton’s claims today, the committee does not know why or when she chose to wipe clean her personal server, but we do know her way of doing things provided an incomplete public record.”

In short, she’s lying about everything.  Her string of assertions in the CNN clip embedded above contain numerous verifiable falsehoods.  She was absolutely not within her statutory and regulatory rights to set up, and exclusively use, an insecure email server to conduct official business.  The notion that she went “above and beyond” what was required of her is “laughable,” according to an expert on government transparency compliance.  She did not utilize a single mobile device for the sake of “convenience” (nor did she use just one email address, as claimed).  Her correspondence with top aides did not automatically end up in the “government system,” as several of them followed her lead by using private accounts (to say nothing of State’s shambolic email archiving practices).  And she did not turn over all non-personal, work-related emails to the State Department, as she still insists.  There’s concrete evidence that her team withheld official records in the process of unilaterally deleting tens of thousands of messages with no independent oversight.  Almost nothing that she stated in that answer represented the full truth.  Quite a lot of it wasn’t even partially true.  But she did cheerily note that she finds the whole controversy “kinda fun,” chuckling that any whiff of impropriety was surely dreamed up by crazy partisans who are always out to get her.  Spoken like a woman who’s confident in her ability to get away with virtually anything.  And she might be right, for reasons elucidated by a trusted Clinton spinmeister:

“On election day, Bill Clinton’s [trustworthy rating] was 41 percent, and yet he won 31 states, plus the District of Columbia; 379 electoral votes.”

Lesson: Honesty and trustworthiness are overrated. That was certainly true for her charismatic husband, but will it be true for her? On one hand, she’s far less likable and talented than he ever was. On the other, First! Woman! President! may be a sufficiently potent narrative to overcome a boatload of charmless aloofness and corruption.

If You Really Wanted to Destroy the U.S., Then...
Townhall
Place your bets! People are speculating why Klaus Schwab is in Washington, DC
Twitchy
Did an ‘LGBT-Caucus’ California State Senator Just Pull a 'Jussie Smollett?'
Redstate
Police Release Confusing Information About University of Idaho Murders
PJ Media