By the way, Hamas is using a hospital as its operations hub in Gaza

Just a friendly (read: revolting) reminder about the nature of Israel’s enemy.  We’ve touched on this fact in passing in a number of previous posts, but it deserves to be highlighted, front and center.  Tablet tells the truth and calls out the media:

The idea that one of Hamas’ main command bunkers is located beneath Shifa Hospital in Gaza City is one of the worst-kept secrets of the Gaza war. So why aren’t reporters in Gaza ferreting it out? The precise location of a large underground bunker equipped with sophisticated communications equipment and housing some part of the leadership of a major terrorist organization beneath a major hospital would seem to qualify as a world-class scoop—the kind that might merit a Pulitzer, or at least a Polk. So why isn’t the fact that Hamas uses Shifa Hospital as a command post making headlines? In part, it’s because the location is so un-secret that Hamas regularly meets with reporters there. On July 15, for example, William Booth of the Washington Post wrote that the hospital “has become a de facto headquarters for Hamas leaders, who can be seen in the hallways and offices.” Back in 2006, PBS even aired a documentary showing how gunmen roam the halls of the hospital, intimidate the staff, and deny them access to protected locations within the building—where the camera crew was obviously prohibited from filming. Yet the confirmation that Hamas is using Gaza City’s biggest hospital as its de facto headquarters was made in the last sentence of the eighth paragraph of Booth’s story—which would appear to be the kind of rookie mistake that is known in journalistic parlance as “burying the lede.” But Booth is no rookie—he’s an experienced foreign reporter, which means that he buried the lede on purpose.

Click through for fascinating details, including the fact that Israel actually built the subterranean bunker under Shifa Hospital that’s currently being used to protect top Hamas militants.  They did so back when they occupied Gaza, prior to 2005 (when Israel unilaterally and forcibly withdrew from the strip as a good faith gesture for peace; they’ve since been rewarded with roughly 11,000 rockets fired at their civilians).  The piece also describes the very tight media controls Hamas imposes on reporters who are granted access to the hospital.  Its conclusion:

What Hamas has done, therefore, is to turn Shifa Hospital into a Hollywood sound-stage filled with real, live war victims who are used to score propaganda points, while the terrorists inside the hospital itself are erased from photographs and news accounts through a combination of pressure and threats, in order to produce the stories that Hamas wants. So if reporters aren’t entirely to blame for participating in this sick charade, then who is?

One wonders how many of these people are aware of this information as they assess blame and justification.  My guess: Not many, by their own admission.  Meanwhile, did you hear about those Israeli bombs that killed and maimed dozens at a hospital and a refugee camp this week?  As we mentioned yesterday, the IDF has adamantly denied responsibility, asserting that both shells were, in fact, misfired Hamas rockets.  They’ve been piecing together the supporting evidence ever since, culminating in this map.  Devastating: 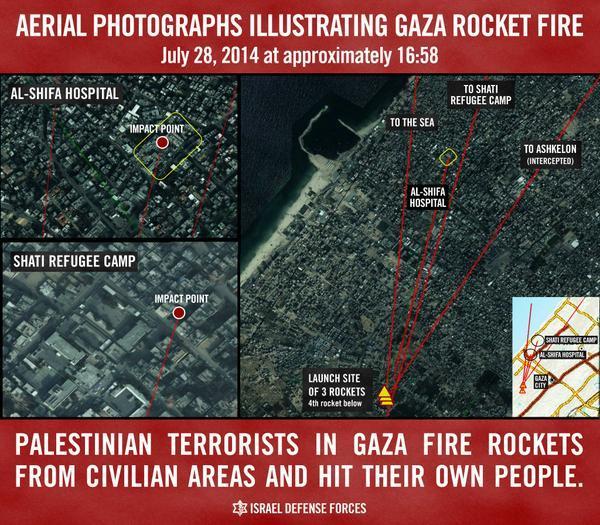 Even some of Israel’s greatest “outrages” are actually consequences of Hamas’ barbarism and incompetence.  Oh, and a Reuters correspondent is also reporting that a third cache of Hamas rockets has been discovered inside a UN-administered Gaza school.  This sort of context should lead every newscast.  It does not.  I’ll leave you with three items.  The first is a tweet from an average Israeli, who describes what he and his family have endured at the hands of Hamas’ relentless shelling campaign.  The second is a poll demonstrating how Israelis are rallying around the steady and strong leadership of their Prime Minister, who has remained firm on the IDF’s mission of destroying the terrorists’ tunnel network.  (Those passages have enabled several lethal attacks since the conflict began; a Hamas spokesman bragged on television this week that Israel has only found “a fraction” of them).  And finally, an execrable sermon from a Hamas-aligned cleric in Gaza:

Sirens. Two sleeping daughters in my arms. Sleeping baby in my wife’s. Three floors down to the shelter. One boom. #ItMustStop

Israel firmly behind Netanyahu. Channel 2 poll: 82% are satisfied with Netanyahu’s performance during crisis, 10% not. (Last week 57%-35%)

“Our doctrine in fighting you [the Jews] is that we will totally exterminate you. We will not leave a single one of you alive because you are alien usurpers! … Wherever the Jews lived, they spread corruption!”

Hamas’ leader told Charlie Rose point blank this week that he will never recognize Israel as a Jewish state. And yet we’re told repeatedly that all Israel needs to do to achieve “peace” is to cease their military campaign and lift the blockade of Gaza (the point of which is to interdict weapons).  Hamas’ words, actions, and founding document be damned.

What Were Democrats Thinking With Their Latest Decision on 2024?
Townhall
Former Mumford and Sons banjoist Winston Marshall wants everyone to know he retracted his apology
Twitchy
Biden Team's 'Prior Chinese Balloons' Narrative Changes Yet Again
Redstate
Biden's Story About the Spy Balloon Doesn't Add Up; Here's What Most Likely Happened
PJ Media