Of course she did.  The entire point of last week’s willfully dishonest media frenzy was to tee up this sort of ‘swirling allegations’ attack for Walker’s political adversaries.  The press buried — or outright ignored — the crucial context that “new” anti-Walker “revelations” were actually old, twice-rejected legal theories from a secret investigation that had been ordered halted by two different judges.  But the egregiously misleading, present-tense headlines didn’t have to be remotely accurate to serve their intended purpose:

That spot went live just days after Democrat Mary Burke (whose relationship with the truth has been…checkered) assured voters that the ‘John Doe’ investigation would not be a focus of her campaign.  Better still, it debuted on the same day that the special prosecutor’s office issued a clarifying statement confirming that Walker is not, and never was, a target of their (suspended) investigation.  In case you missed it yesterday, here’s how the investigators themselves described Walker’s non-involvement:

Not only was Walker never charged or indicted — let alone convicted — he wasn’t even served with a single subpoena.  The Burke ad is garbage, and she knows it — yet her camp is aggressively refusing to pull it off the air, as demanded by Team Walker: “Scott Walker may not like that he is alleged by prosecutors to be at the center of a nationwide criminal scheme that is the subject of an ongoing investigation…but the facts speak for themselves  This ad will stay on the air,” the Burke campaign sneered in a press release.  Of course, the actual “facts” do speak for themselves, and they’re nowhere to be found in the commercial.  Also, the investigation is not “ongoing,” but whatever.  The true villain in all of this is not an opportunistic Democratic campaign capitalizing on journalistic malpractice; the villains are the lazy, biased journalists who passed Burke the ball for an easy layup.  When this non-story dropped last Friday, Wisconsin’s largest newspaper devoted its entire above-the-fold front page to blaring coverage.  The fact that the prosecutors’ allegations being trumpeted had been thrown out of state and federal court months earlier did not appear on said front page.  The Milwaukee Journal-Sentinel’s editors have defended their horrible coverage in a thoroughly unconvincing manner:

[An editor’s] answer to such criticism? He basically argues that the judicial rulings are old news, previously reported by the paper. But in advancing that line, Stanley acknowledges that the newsroom was 100% aware of the rulings when the documents were released last week. This makes the paper’s initial stories all the more reprehensible. While the newsroom knew that two separate judges had rejected the prosecution theory, it buried that crucial fact. Stanley acts as though the mere existence of the earlier stories provides the context that local and national readers would have needed last week.

What a pathetic standard:

John Smith: Well, they said that a few months ago, but the case was thrown out of court — twice — and I was never even charged.

Newspaper: Yeah, and we wrote a story about it at the time.  But get a load of these machete murder allegations!

By the way, now that the special prosecutor has stepped forward to correct the record, how did the Journal-Sentinel elect to treat that development in today’s paper? 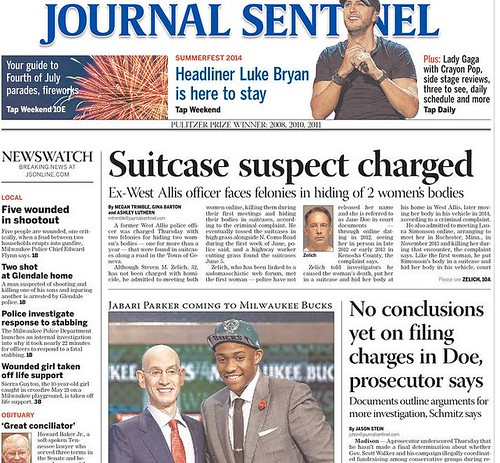 Accurate headline: “Prosecutors say Walker never a target of ‘John Doe,’ not implicated in ‘criminal scheme.'”  Actual headline: “No conclusions yet on filing charges in Doe, prosecutor says.”  Subhead: “Documents outline arguments for more investigation…”  Um, charges weren’t filed because two judges decisively repudiated “arguments for more investigation” and shut the whole enterprise down.  Readers who scanned this front page would still be in the dark about that all-important context, perhaps concluding that prosecutors were still just mulling things over. Meanwhile, the Washington Post and New York Times each showcased last week’s Walker “bombshell” in front page stories.  Today?  Zilch on the Post’s front page, while the New York Times features this fine-print gem at the very bottom of A1:

Wisconsin Inquiry is Halted: A prosecutor said he was unsure that he had enough evidence to charge the governor in fund-raising case.

The bolded bit would have been an accurate update several months ago. The three-line explanation fails to mention that perhaps the prosecutor was “unsure that he had enough evidence to charge the governor” because two courts have ruled that he did not, and because the governor wasn’t a target of the investigation.  Good lord.

Parting thought: The Burke ad also claims that Wisconsin ranks dead last in job creation among Midwestern states, according to one survey.  Naturally, it fails to mention that the state ranks among the top ten nationally in Gallup’s annual job creation index, released in February.  Ninety-five percent of Wisconsin job creators say the state is headed in the right direction, as do a majority of Badger state voters.  Walker’s successful budget reforms have helped create large budget surplus, some of which the governor is delivering back to taxpayers via sweeping tax relief.  His campaign has also noted that when Mary Burke was Commerce Secretary under the Doyle administration, “the state’s growth never exceeded 1 percent, lagging the nation every year,” adding that her tenure “was the only time in the last 25 years where Wisconsin’s unemployment rate exceeded that of the national average.”  Finally, it’s a bit rich for Burke to chide Walker for launching an issue-based attack ad in…a scurrilous attack ad of her own.