You already know how the national polling looks, but those numbers include the opinions of many Americans whose votes will have zero impact on the much-watched battle for control of the Senate. NPR clears out New Yorkers, Californians and Texans (among others) from its sample, focusing instead on the following 12 states: Alaska, Arkansas, Colorado, Georgia, Iowa, Kentucky, Louisiana, Michigan, Montana, New Hampshire, North Carolina and West Virginia. A look at the results, bearing in mind that presidential approval rating has historically been the single most significant variable in midterm election cycles:

That would be (38/58) overall, including an abysmal (33/63) among independents. On the generic ballot — a measure on which Republicans traditionally struggle — the GOP holds a three-point lead (46/43), buoyed by an eight-point advantage with indies.  But it’s the ‘issue trust‘ questions, that must really worry Barack Obama’s party: 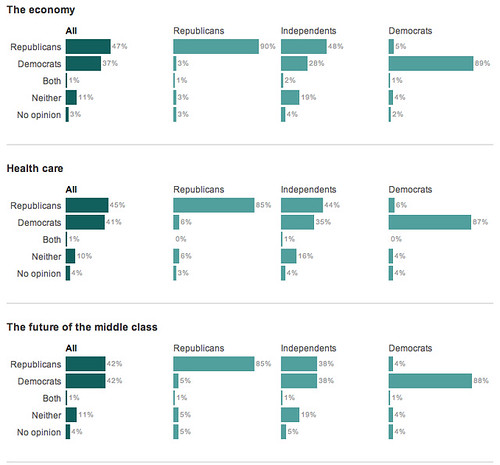 A four point Republican lead on healthcare (an issue Democrats have historically dominated — gee, what changed?), a tie on protecting the middle class (that’s a catastrophe for Democrats), and a double-digit GOP edge on America’s dominant number one issue.  Americans remain “highly anxious” about the US economy, political handicapper Charlie Cook writes today, and voters in battleground states appear poised to place the blame on the president’s party.  Conventional wisdom holds that bread-and-butter issues will carry the day in the fall, but I’d wager that voters are currently more attuned to foreign affairs than they’ve been in years, due in large part to the Bergdahl/Taliban swap and Iraq’s head-spinning descent into jihadi hell.  Which party do battleground state voters trust more on foreign policy?  Blowout:

Democrats seized an advantage on this question late in the Bush years, when the electorate abandoned Republican foreign policy in droves.  After six years of Barack Obama, the tables have turned again.

Exit question (Allahpundit ™): Despite the remarkably favorable electoral environment in which the GOP finds itself, polling averages in key Senate races still suggest that netting the requisite six seats to regain control is no gimme.  If Republicans end up failing to win the Senate in this year, then what?  As our esteemed colleague might say, dude, I’m nervous.

How the Highland Park Shooter Reportedly Obtained His Guns Is Beyond Ridiculous
Townhall
Here's an ad that truly showcases the edge Gavin Newsom and California have on Ron DeSantis and Florida [video]
Twitchy
New 'Worse Than Trump' Drops as Democrat Flop-Sweat Over 2024 Builds
Redstate
The Morning Briefing: LOL, Trump Is Still the Democrats' Daddy
PJ Media