Open the Books — a good government and transparency-minded watchdog organization — does exactly what their name implies, and discovers that taxpayers showered officials at seven embattled VA locations with nearly $9 million in bonus pay between 2011 and 2013:

Now, at least seven VA centers are being investigated for “secret” waiting lists. Here are the bonuses into these troubled facilities (2011-2013):

Here’s the report itself.  The list of facilities now under investigation has ballooned to 26 and counting, so these estimates likely do little more than scratch the surface. And they only span two years.  Remember, bonuses aren’t a mere sideshow in this scandal, as several media outlets have reported that some of the VA administrators who cooked the books on wait times were motivated by avarice.  Their maneuvers were, in part, a job- and bonus-protection scheme — which is why Senate Democrats’ endorsement of inaction, as Ed put it earlier, is so galling.  Marco Rubio’s bill would have empowered the “mad as hell” VA secretary with greater leeway to fire bureaucrats who intentionally skirt rules and game the system to conceal  their failures.  The legislation sailed through the House earlier this week in a lopsided, bipartisan 390-33 vote.  Harry Reid and company can’t be bothered to even take it up.  Here’s Rubio tangling with Senate Veterans Affairs Committee chairman Bernie Sanders over the issue, via Noah Rothman (click image to watch): 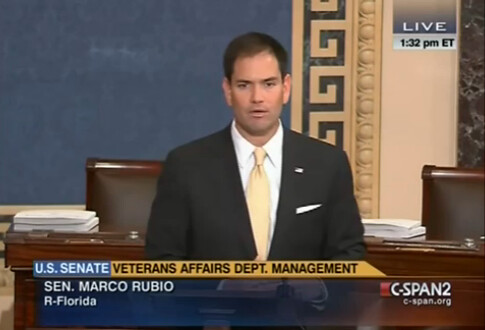 “I don’t’ think that any of us want to go home for the Memorial Day recess and when we’re asked ‘What are you doing on this issue,’ our answer is, ‘Well, in about 15 days we’re going to have a hearing,” Rubio concluded.

ABC News’ Michael Calderone wonders if Democrats’ tenuous support for Sec. Shinseki is on the brink of expiring:

DEMOCRATS DRIP, DRIP, DRIP: Yesterday Kentucky U.S. Senate candidate Alison Lundergan Grimes called for Shinseki’s resignation, saying in a statement: “We owe a solemn obligation to our veterans, and our government defaulted on that contract. I don’t see how that breach of trust with our veterans can be repaired if the current leadership stays in place.” So did Republican-turned-Democrat Charlie Crist, a candidate for governor of Florida: “While we don’t know precisely what happened here, we do know that there must be accountability and confidence in leadership in order to get to the truth and provide veterans the medical care they’ve earned and deserve. That confidence is gone. I think it would be best if the Secretary stepped down and allowed others to get the VA fixed once and for all.”

Calderone also notes that Grimes won’t give a straightforward answer to a basic question on Obamacare, prompting Rick Klein to marvel at how Democratic candidates continue to flub their answers.  I’ll leave you with this CNN clip, which was flagged by my Townhall colleague Greg Hengler.  Over to you, VA whistleblower:

Six to ten months, “or longer.”  A disgrace.  Oh, and one more thing: Guess who touted the VA as a triumph of government-run healthcare during the Obamacare debate of 2009 and 2010?

People who worked for DA Chesa Boudin say he has failed to put victims first
John Sexton May 27, 2022 7:20 PM ET

Ukrainian unit in Donbas: We refuse to continue fighting without better weapons and commanders
Allahpundit May 27, 2022 6:41 PM ET