Yes, but what if you're 'Vax Curious'?

Let’s face it. The brand of Kamala Harris is beyond repair.

Sometimes, you can blame the individual for the chaos, and that’s certainly been true of late for the Vice President. Whether it’s her continued expression of love for Venn Diagrams, school buses, or whether it’s her ponderous veepsplaining of electricity, or space, as though we were watching a less entertaining episode of Sesame Street rather than a policy speech.

But other times, bad staff can create a black eye for their boss. Washington Senator Maria Cantwell used to have a scheduler who got busted in a gay child sex sting. Former Senator Barbara Boxer’s economic advisor got busted bringing pot into the Capitol. Three different aides to Washington Congressman Rick Larsen drank at work and then tweeted about it, along with what they really thought about their boss once they were lubed up. That’s not necessarily all the principal’s fault, but it is ultimately reflective upon the politician if their staff picks don’t turn out to be so hot. Lord knows Donald Trump has paid the price for that over the years, and so has Kamala Harris, resulting in a turnover that makes Murphy Brown’s secretary look like a lifer by comparison.

It’s when you combine the two – personal idiocy buttressed by malfeasant staff, that’s when you get something truly special. And that’s where we’ve come to in the presence of the Vice President.

Harris was in sunny Southern California last Friday morning on a postcard-caliber day to bemoan the ravages of climate change in Los Angeles on a day when it hit 68. So dire is the effects of climate change that she had to fly all the way across the country aboard Air Force Two in order to give this speech. Here’s just a sample of the soaring rhetoric we’ve come to adore and respect from the Veep.

As David Huddleston playing Olson Johnson in Mel Brooks’ Blazing Saddles said after a Gabby Johnson rant, “Well, who can argue with that?” This speech was standard Harris pablum. It was then immediately followed by another flight aboard Air Force Two back across the country to Tallahassee, Florida, where she gave an abortion speech on a Friday night leading into the 50th anniversary of the now-defunct Roe decision. Yes, that’s right. The Vice President is so worried about the dangers of climate change killing all of us in the near future that she chose to increase her own personal carbon footprint more than you and I will be responsible for, for years, and why? Because she just had to show those neanderthal DeSantis voters in Florida that we have to protect the ability to take life on demand up to the point of delivery at all cost.

During her speech, she invoked, as thousands of American politicians before her have invoked, the Declaration of Independence, and its God-given, unalienable rights that all Americans possess. Except for the first and primary unalienable, God-given right – the right to life. Oh, she included the rights to liberty and the right to pursue happiness, but the right to life? That phrase could not escape her lips at a wake for Roe V. Wade in Florida.

So Harris continues to be her own worst enemy when it comes to the public’s perception of her political abilities. Now here’s where her staff piles on to make her look woefully incompetent. In order to go watch Kamala Harris make her plea to continue the taking of the life of the unborn on demand, attendees had to fill out and return an attestation of vaccination form. Here it is. 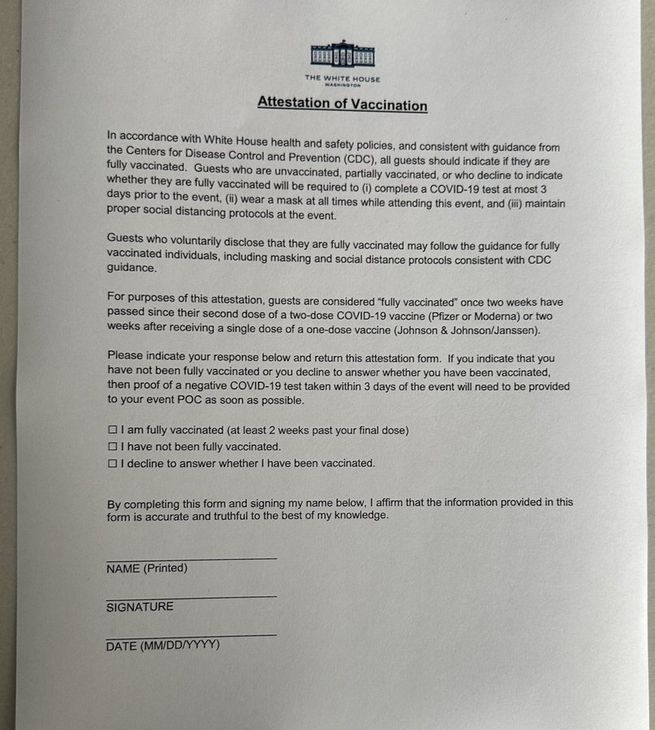 You have three options to fill out – I’m fully vaccinated, I’m not, or I refuse to answer. I do not believe that includes the universe of all possible answers, and in the current environment of genders with which we’re all supposed to recognize, I am outraged here. Where’s the line to respond if you’re vax curious? What if you’re a trans-vaxxer? A pan-vaxxer? What about your natural immunity developed after having COVID? We’re still not recognizing that’s a thing? But notice if you refuse to attest or are not fully vaccinated, the form says at the top that you have to provide a negative test within three days of the event before you’re allowed in. Except the form isn’t consistent with itself as the last paragraph says if you choose not to jump on the Team Vax bus, you have to show your negative test as soon as possible. Note that could mean after the event is over.

Next, it says to the vaccinated that they should follow the CDC guidelines for masking and social distancing. On the CDC’s site, even if you’re vaccinated, they want you avoiding indoor settings if possible and to mask up. The event was at The Moon, a very popular indoor nightclub in Tallahassee. No one was masked, and the room was packed shoulder to shoulder.

For a document that strives to claim it’s following current CDC guidelines, and therefore “science”, it next says for the purposes of this form, fully vaccinated means you’ve completed the two doses of the Pfizer or Moderna vaccine, or the one dose of the Johnson and Johnson vaccine. Well now, that’s not exactly considered by science, by the CDC, by Dr. Fauci, or anyone to be fully vaccinated anymore, is it? What are we on, booster number 3? 4? 12?

I’ve gone through COVID twice. Been vaccinated twice. Boosted once. Haven’t seen the business end of a needle in a little over a year. I’m not really in a hurry to get an update, as I’m viewing the virus more now as a flu than anything else, and it’s just not a priority for me. I’m not going to pass or entertain judgment on the decisions or views of anyone else on the great vax debate. Just putting my own cards out there. That said, I don’t consider myself to be fully vaccinated, at least according to the labyrinth that represents current CDC guidelines. But I’m certainly vaccinated enough to go to see Kamala Harris speak in Florida. I’m just not intoxicated enough to put myself through the experience.

And above all, never mind the fact that Harris has had every jab that can be had thrown at her – internally as well as online. She isn’t supposed to be vulnerable enough to contracting and/or suffering from COVID to precipitate the need for the attestation in the first place. This is all nonsense that’s wrapped up in a form letter purporting to quote science that doesn’t have the final word on the subject, but yet doesn’t even follow the science its own agency is citing.

The one good thing you can say about Kamala Harris as we start Year 3 of the Being There years, she remains the most consistent figure in the administration, albeit her consistency is measured in terms of her incompetence, hypocrisy, tone deafness, and unlikability. But that consistency isn’t enough to resurrect or stabilize her brand on the national stage as a politician.

Russia's economic picture is looking up thanks to allies
John Sexton 6:40 PM on January 31, 2023

A strong majority of Americans believe "America is weak." Maybe they're right

Prog hypocrisy: When a venue is so problematic you have to check it out yourself
Beege Welborn 5:01 PM on January 31, 2023

Minnesota will once again give driver's licenses to illegals
Jazz Shaw 4:31 PM on January 31, 2023