WSJ: Get ready for some state legislatures to flip for the GOP, too

Not to get too hasty here, but speaking of election-year indicators that currently bode somewhat ill for Democrats, U.S. Senate seats aren’t the only potential game-changing gains that Republicans have in their sights this November. A handful of chambers on the state-legislature level could be ready to move significantly rightward as well, and while nobody is trying to predict that it’s going to be a 2010-level blowout or anything yet, there are some distinct possibilities for adding on to the 26 states in which the GOP already has legislative control, via the WSJ:

Control of five state Senates would swing to the GOP with a gain of no more than three seats, and the party is targeting four additional state legislative chambers, believing the political environment favors Republicans this year. …

“Republicans are at something of a high-water mark,” said Tim Storey, who tracks elections at the nonpartisan National Conference of State Legislatures. “However, there are still a number of states where Republicans could flip chambers and come out even stronger than they came in.”

In Colorado, where Republicans are one seat away from control of the Senate, proposed limits on hydraulic fracturing could be curtailed. In the Nevada Senate, a Republican gain of one seat to take a majority could thwart the repeal of a constitutional ban on same-sex marriage. And if Republicans gain two seats to win control of the Iowa Senate, they are expected to push income- and corporate-tax cuts. …

Oregon, where the GOP needs two seats to gain a Senate majority, and Maine, where it needs three, are also high on the party’s target list. The more remote prospects on the party’s radar include the New Hampshire House, which has seen control flip three times in the past four elections; the Kentucky House; and both chambers in West Virginia, a state where President Barack Obama‘s low approval ratings have created a particularly large burden for his party.

Democrats, for their part, look like they may be able to wrest state-level control from the GOP in Wisconsin, Pennsylvania, and New Hampshire: 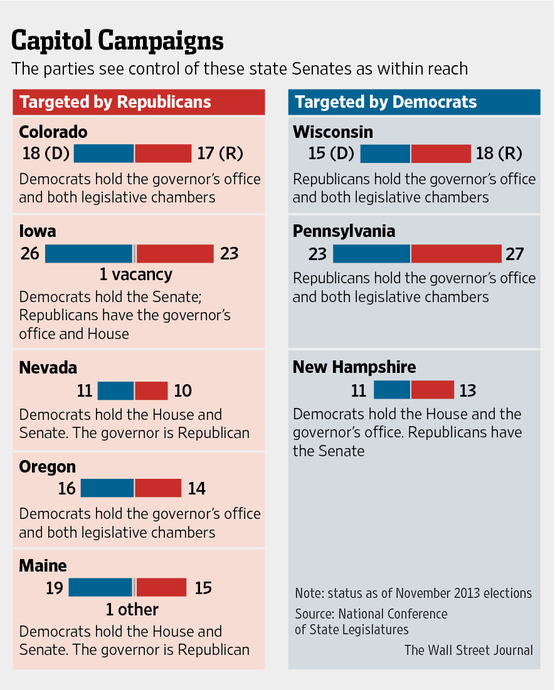 The Democrats will be working diligently to boost their turnout on election day, but a lot of these races do look like they’re Republicans’ to lose; in West Virginia, for instance, strong anti-Obama sentiment and the state’s reddening tendencies are setting up the legislature for a possible GOP takeover, and in Colorado, the grassroots-driven recall of two state senators over their pro-gun control package votes is still pretty fresh in voters’ minds.