The ongoing Slowest Recovery Ever has had our economy growing at only meager rates, and yet the federal government is about to collect record revenues — but President Obama’s budget is chock full of new ideas for still more taxes and still more government spending. The Office of Management and Budget reports that, under the president’s budget proposal, he’ll become the first-ever president to break the $4 trillion spending mark for a single year. Peachy, right? From the WSJ:

The real news is that his budget ratifies much of the spending increase of the first term and tries to lock it in. He wants the feds to spend $3.78 trillion next year ($11,944 per American), which would still be 22.2% of national output nearly four years into an economic recovery. Before the financial panic in 2008, the government was spending about $1 trillion less, or closer to $2.7 trillion a year and an average of 20% of GDP—and President Bush was no slouch as a spender himself. …

On the other hand, debt held by the public as a share of the economy will continue to climb—to what the White House predicts will be a peak of 78.2% of GDP in 2014. As recently as 2008, U.S. debt was 40.5% of the economy. Mr. Obama has nearly doubled it. (See the nearby chart.) With a modicum of spending restraint and faster growth, the debt burden will start to decline. The danger is that there’s no room to avoid Southern European debt levels if we have another recession or an interest-rate spike. 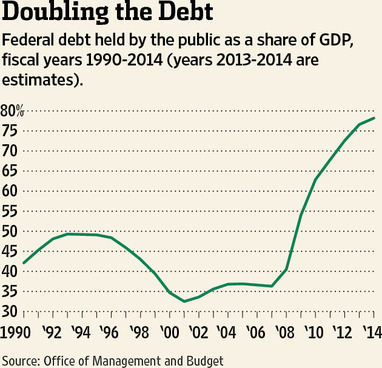 What we really need right now is a plan to grow the economy and keep more money in the private sector, but instead we’ve got plans for more infrastructure, college aid, high-speed rail, more fantastical green-energy adventurism, and other “stimuli” along with higher and hidden taxes and no real plans to pay down our debt. Perfect.

Update: That’s about where Speaker Boehner’s head was in his press conference earlier today:

Cities around the country have set new homicide records but at least one DA says there's no 'crisis of violence'
John Sexton Dec 08, 2021 5:30 PM ET

European CDC: Out of hundreds of cases of Omicron here, not a single one involves severe illness
Allahpundit Dec 08, 2021 5:01 PM ET