The energy crisis that wasn't

How many times throughout the twentieth and twenty-first centuries have we been treated to frightening, dire projections of catastrophic eventualities in which the world runs out of energy resources and modern life comes to a screeching halt? Yet, miraculously, we’ve somehow managed to shoot right past all of these apocalyptic benchmarks, and our proven energy reserves only keep expanding.

This came to my mind the other day when my mom informed me that we all need to start preparing for the end times because she’d heard of some new prediction that the world’s quickly developing economies mean that we’re going to face drastic energy shortages come 2030 or something, and I couldn’t help but protest the pessimism. There may be any number of reasons to prepare for survival scenarios (hostile nuclear winter and shortages induced by the tyranny of big-government folly spring to mind), but a legitimate crisis in finite energy supplies probably isn’t one of them. Yes, more people moving from poverty to prosperity (which is an excellent thing on many levels, by the way) mean dramatic demand spikes, but human beings have a remarkable knack for innovating and adapting, and over the years, new technologies and improved efficiencies mean we’ve been getting more and more out of less and less.

The most recent and glaringly large-scale example of this is the shale gas boom — and as much of our money as the environmentalists have poured down the drain in politically-preferred fledgling venture technologies that they’ve deemed will bring us to their version of a sustainable future, natural gas is decidedly winning the war in most effectively bringing down our carbon emissions. Via RCP: 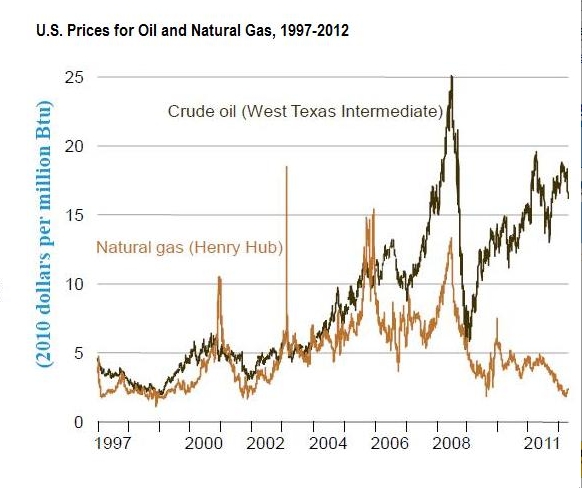 Traditionally, oil and gas prices moved up and down in tandem. This was because gas was nearly always found in conjunction with oil. …

The development of fracking as thus completely separated the availability of oil and gas. …

The huge differential has opened many opportunities. If natural gas could be converted to a liquid fuel – methanol, for instance – it would sell at about half the price of gasoline and help reduce our foreign imports. Or natural gas could be exported to Japan, where it sell for four times the US price, reducing our trade deficit. Either way, the huge gas-oil differential has enormous potential for improving our energy budget.

There are plenty of theories about why shale gas can’t or won’t last long or help us much in our search for supposed sustainability, but I’m taking the rational-optimism road on this one — and I’m sure as heck not arguing against alternative energies in general. I am arguing against the government spearheading “investment” in their preferred green ventures, because by their very nature (a.k.a. the government pouring money where the free market won’t), these ventures are not fated to end well, but the free market and prosperity have made the drastic leaps in innovation and efficiency that have made our lives exponentially better for ages. What reason is there to believe that big government can provide solutions where free enterprise can’t?

I suppose in some sense, the earth’s resources are indeed finite, but by the time we hit that wall, who knows where we’ll be. Maybe we’ll have a wealthy and ergo stable population that powers their highly efficient homes and technologies with just the tiniest bit of nuclear-powered energy, and we’ll all getting around via teleportation — there aren’t many limits on what humankind can achieve.

The NY Times is preparing for a union walkout tomorrow
John Sexton 9:00 PM on December 07, 2022

Polygamy and child rape under the guise of religion

Macron toasted them after Jill Biden said she is "absolutely" ready for a re-election campaign
Karen Townsend 7:41 PM on December 07, 2022

Trump Hired a Crew to Search His Storage Units. Here's What They Found.
Townhall
Radio host explains why it's OK to go after Sen. Ted Cruz and his teen daughter after she was rushed to hospital
Twitchy
PALATE CLEANSER: Please Enjoy Sen. Burr's Response to CDC Director Walensky's Concern Next Agency Head Be Senate Confirmed
Redstate
Why Are Black People Still Voting for Democrats? It's Magic!
PJ Media