Trafalgar: Guess which voters the Mar-a-Lago raid has energized?

Three guesses, and the first two don’t count. The FBI/Department of Justice raid for which no one wants to claim responsibility now may end up backfiring on those who initially cheered it. At least for the moment, seven out of ten Americans say that the raid has increased their motivation to turn out in the midterms, and that’s true across all political demos.

It’s more true, however, among Republicans and independents than among Democrats in a Trafalgar snap poll taken this week:

Trafalgar Group Poll: Does the FBI Raid on President Trump Increase your Motivation to vote in 2022 elections? (Republican voters)

Fifty-five percent of Democrats report an increased motivation to vote after the raids, but they come in third behind Republicans and independents (72%). Furthermore, the motivation behind the motivation can be sussed out in the responses to another question: who ordered the raid, and why? The overall result does not bode well for FBI/DoJ credibility: 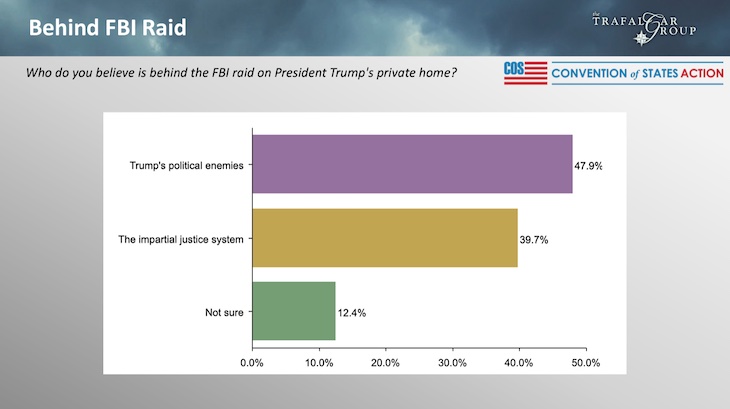 Fewer than 40% of the electorate is giving the FBI and DoJ the benefit of the doubt, while almost a majority are convinced that the move was political in nature. That gets worse in the demos, because most of those giving any benefit of doubt are Democrats:

If this accurately reflects the state of the electorate on the cusp of early midterm voting, Democrats may be in more serious trouble — and midterm polling models may not reflect it, at least not yet. This suggests that the potential complacency on the Right over a presumed “red wave,” as well as the division between the MAGA and non-MAGA wings of the GOP, may be eliminated. Voter anger over the raid appears to have lit a unifying fire under Republicans, and also may be driving independents who want accountability for the way Joe Biden and his team have derailed American norms in the past 18 months.

Of course, if the DoJ and FBI can come up with an explanation for the raid that makes sense, this response could mitigate or even peter out. It’s been three days, however, and the only response has been to dodge responsibility. Merrick Garland has spent that time on a milk carton, for that matter. The longer this goes unanswered, the more these trends begin to set in concrete.

Matt Taibbi warned earlier this week that the DoJ and FBI had better come up with something spectacular, or else this will shortly be seen as the stupidest political stunt in American history:

We’ve reached the stage of American history where everything we see on the news must first be understood as political theater. In other words, the messaging layer of news now almost always dominates the factual narrative, with the latter often reported so unreliably as to be meaningless anyway. Yesterday’s sensational tale of the FBI raiding the Mar-a-Lago home of former president Donald Trump is no different.

As of now, it’s impossible to say if Trump’s alleged offense was great, small, or in between. But this for sure is a huge story, and its hugeness extends in multiple directions, including the extraordinary political risk inherent in the decision to execute the raid. If it backfires, if underlying this action there isn’t a very substantial there there, the Biden administration just took the world’s most reputable police force and turned it into the American version of the Tonton Macoute on national television. We may be looking at simultaneously the dumbest and most inadvertently destructive political gambit in the recent history of this country.

Taibbi also includes the Russia-collusion investigative moves in that calculation, which he says look like an echo of the raid:

It’s amazing how short our cultural memory has become. Apparently few remember all the other times this exact rhetoric was deployed in the interminable list of other Trump investigations, only to backfire later. Does anyone remember this doozy?

Applications for FISA warrants, Comey said, are often thicker than his wrists, and that thickness represents all the work Justice Department attorneys and FBI agents have to do to convince a judge that such surveillance is appropriate in an investigation.

Read the whole thing, and subscribe if you don’t already. This is precisely why Americans no longer give either the FBI or the DoJ any benefit of doubt when it comes to political investigations. And this raid may remind Americans that the swamp still needs a lot of draining — and that it will take draining Democrats out of it first.