Is this is a no-kidding shocker? It depends on your toleration for roller coasters — and recessions. Last month’s producer price index came in at 11.3% year on year and didn’t give much indication of a softening inflationary wave. Today’s report on producer prices in July shows a dramatic plunge all the way down to 9.8%, with the month-on-month figure dropping into negative territory at -0.5%. 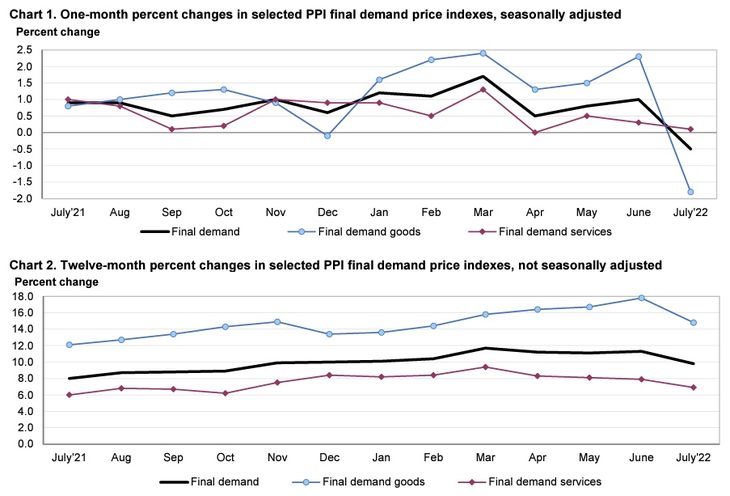 The bottom chart for year-on-year readings show a significant downward tilt, but the the month-on-month declines are more dramatic. And for a reason, which we’ll get to momentarily, but first the drop in final demand for goods is the largest since the first full month of the pandemic, in fact:

The Producer Price Index for final demand fell 0.5 percent in July, seasonally adjusted, the U.S. Bureau of Labor Statistics reported today. This decline followed advances of 1.0 percent in June and 0.8 percent in May. (See table A.)

But why? Once again, the sudden drop in demand for gasoline is distorting the results on inflation:

Less food and energy, core PPI went up 0.2% month on month, which may still understate how that will transfer to consumers. The plummeting gasoline prices will certainly provide some relief, but the 1.0% month-on-month increase in food will likely outweigh the gas savings — assuming that gas prices remain at their current levels.

Final demand for services increased only slightly, 0.1% month on month, in what would be considered a normal incremental change in a stable-inflation environment. Gas prices have less impact on services, although not entirely negligible, as prices on fuel and lubricant services shot up 12.3% for the month.

A look at Table 1’s year-on-year inflation rates in PPI shows that consumers are still taking a beating: 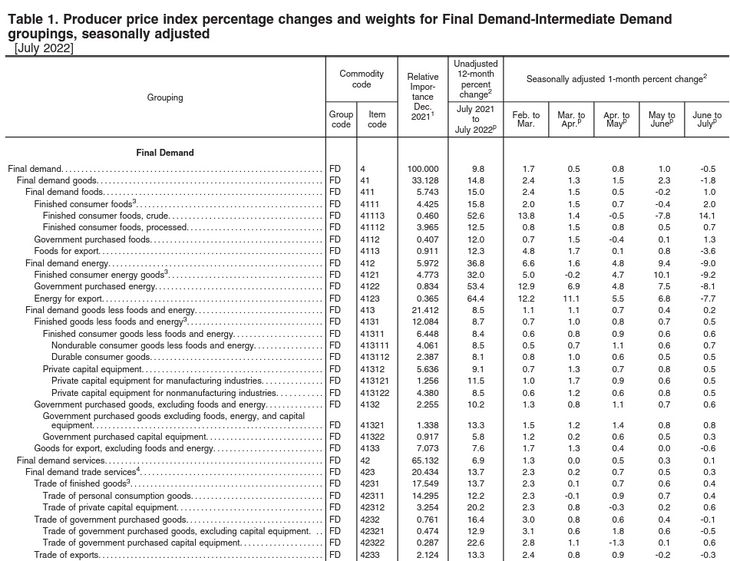 Almost all categories still show double-digit year-on-year increases, and crude consumer food prices show a month-on-month increase in double digits as well. Even with the one-month plunge in gas prices, energy inflation still hits 8.5% year-on-year in this report, too.

So what does this mean? Is this a signal that inflation is over and the economy is on the brink of recovery? Not exactly. As I mentioned in my first post, the drop in gas prices is due to a sudden drop in demand, not an increase in supply — and that usually means a recession. The month-on-month personal-consumption figures in the PPI report for July look ominous, too:

The final column represents the latest data in the report, and it’s also seasonally adjusted. Personal consumption of goods less energy rose 1.2%, but when including energy, it fell 0.7%. Personal consumption less foods dropped dramatically to -4.3%, which suggests that economic activity is now concentrated on staples. That would be a product of a five-quarter decline in real disposable personal income, plus what looks like a stall in the economy.

The one-month breather on inflation may be welcome news in some quarters, but the underlying reasons for it are causes for alarm. We are not solving inflation through increased production but through the choking off of demand. That’s a recession, and it may have already arrived, regardless of what the last jobs report suggests.

The GOP Is Expecting Payback Post-2022
Townhall
Aaron Rupar's attempt to make Gov. Youngkin look stupid by taking him OUT of context does NOT go well
Twitchy
Woman's Disturbing Reaction to Man Calling Her out for Wrongdoing Shows an Infantilization of Society
Redstate
American Stasi
PJ Media