Media cheers: Gas is now only up 62% under Biden!

Consider this the bookend to Joe Biden’s claim yesterday that 8.5% inflation in July means Americans experienced “zero inflation” last month. When Biden took office, the US had a 1.4% rate of inflation; by June it had skyrocketed to 9.1% Biden spent those seventeen months refusing to accept responsibility or at times even acknowledge the quintupling-plus rate of inflation — but yesterday he wanted credit for a 0.6% decrease in the year-on-year because for one month overall prices hadn’t gone up.

Actually, most prices had gone up, but the price of gasoline fell sharply in July, offsetting near-record rates of inflation for food and other goods and services. That’s almost entirely due to a reduction in demand, which has lots of implications for the economy, none of which are terribly good. But today’s report from AAA that the average gallon of gas dropped below $4 has dominated the headlines as an “encouraging economic sign,” as NBC’s Today puts it:

Gas prices drop below $4.00 per gallon. @tomcostellonbc has the details. pic.twitter.com/VGmfDbVY0i

This might be an encouraging economic sign if the prices came down due to vastly increased supply. NBC’s reporter suggests that it’s due to Biden’s million-barrel-per-day release from the Strategic Petroleum Reserve, but that barely covers what the US consumes in an hour. As Bloomberg reported yesterday, the price drop came from a drop in demand in July that continued a trend that started in Q2. And the demand will continue to decline all through the third quarter:

The US will consume less gasoline this year than previously thought, although total demand will still top 2021 levels, according to the latest government forecast.

Gasoline consumption for 2022 is now forecast at 8.83 million barrels per day, down from a previous forecast of 8.84 million, according to the Energy Information Administration’s Short-Term Energy Outlook released Tuesday. The expected drop is largely due to a 120,000 barrel a day reduction in the third-quarter demand estimate, which more than offsets a forecasted increase in the final quarter of the year.

The EIA’s report predicts that low inventory levels will keep prices supported at current levels for a while. Refineries are already operating at 93% of capacity, so the ability to produce more is limited anyway. So why are prices and demand dropping while supplies remain restricted? A demand drop almost always indicates a retreat in economic activity. If the EIA’s projection of reduced demand in the third quarter turns out to be accurate, it likely indicates a recession on the very near horizon.

Let’s get back to Biden’s math. It’s true that the price of gas has dropped significantly from its mid-June peak of $5.107 a gallon in the official EIA stats, where the current official average price per gallon is still above $4, at $4.151. (AAA is not official, except for media outlets when it tells a better story.) And that would mean a success for Biden … had Biden taken office on June 13, 2022 rather than January 20, 2021. In that first fantasy world, just as in Biden’s narrative about inflation in July, he gets credit for a 23% decrease in the price of gas.

In the real world, gas prices are still up 62% over their level when Biden took office: 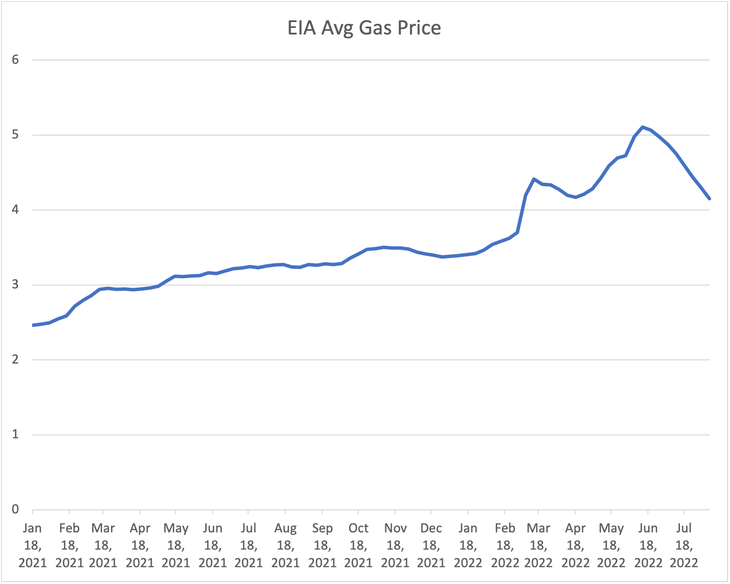 Without a massive increase in supply, this looks like the kind of sharp curve you’d get in a recession. And of course, we’ve already seen the advance report on US GDP for Q2, which shows a -0.9% overall contraction that looks more like -2.3% when correcting for a highly unusual trade surplus that quarter. Those are not “encouraging economic signs,” nor is it a testament to Biden’s management — unless you have collective amnesia about everything that took place before June 13th, 2022. You can bet on the media helping to push that collective amnesia as hard as possible, though.

Addendum: Give credit to the Washington Post for highlighting the recession risks that this indicates — even in their subhead:

Gas prices fall below $4 a gallon, the lowest point since March

… But oil prices have been cooling since early June, with West Texas Intermediate crude, the U.S. benchmark, hovering around $91 per barrel on Thursday. Fuel costs are now in line with what consumers and businesses were paying before the war.

Experts say the sell-off is largely driven by worries of a possible recession in several large global economies, which would crimp fuel demand.

Economists have been warning of a possible recession in the United States for months. Jeff Buchbinder, chief equity strategist for LPL Financial, said in a Monday note that he thinks the odds of a U.S. recession in the next year are “perhaps a coin flip or better,” despite the Labor Department’s blockbuster jobs reading on Friday. England’s central bank warned last week that Britain would enter a protracted recession by the last quarter of 2022.

The National Bureau of Economic Research has not declared the United States to be in a recession, even though economic activity has already declined for two consecutive quarters. Still, fuel demand is already down: As measured as a four-week moving average, it stood at 8.6 million barrels a day as of July 29, according to the U.S. Energy Information Administration. That’s 8.7 percent lower than a year ago.

Don’t expect too much dot-connecting on this point from most media outlets.

Judge refuses to dismiss case against Igor Danchenko but says it was an 'extremely close call'
John Sexton 9:20 PM on September 30, 2022