Yes it did, and for precisely the reason you’d suspect, too. Gallup decided to feature that aspect in a curious reverse of the “Republicans pounce!®” media narrative. It headlines this poll result thusly:

Actually, the overall rating shows that overall approval of the Supreme Court rose three points — within the margin of error, but not a drop:

After several prominent rulings at the end of its term in June, most of which were decided in favor of conservatives’ positions on the issues, the U.S. Supreme Court’s overall job approval rating is 43%, statistically unchanged from last year’s 40% reading. However, the stability in the overall reading masks big swings among partisans, with Republicans’ approval rating rising 29 percentage points to 72% and Democrats’ falling 23 points to 13%. …

The Gallup poll was conducted July 5-26, after the court handed down some of its most consequential rulings in decades on abortion and environmental policy. During this period, the court also ruled on a case concerning gun rights; while only impacting citizens in the state of New York, this case brought the court into public focus in the context of the national debate on gun ownership rights and safety. The current job approval ratings come on the heels of public confidence in the Supreme Court dropping to a record low in June.

The trend in Supreme Court approval suggested the institution had already taken a public image hit long before it announced its 2021-2022 term decisions in June. The Court stirred controversy outside the term last September when it allowed a controversial Texas abortion law to go into effect and allowed colleges to require students to wear face masks to prevent COVID-19 transmission but rejected President Biden’s mask mandate for federal workers.

The difference between the reading from September of last year and the current reading is that in September, the three major party groups were about equally upset with the court, whereas now Republicans are much more pleased and Democrats much more disappointed with how it is handling its job.

In other words, Republicans liked the outcomes in the 2021-22 term and Democrats didn’t. What about independents? They stayed right at 40%, same as last year, a level that has been the floor for the past twelve years or so. It’s basically business as usual among the partisans, as the Gallup chart shows, although the amplitude is higher with the end of Roe than in other cycles: 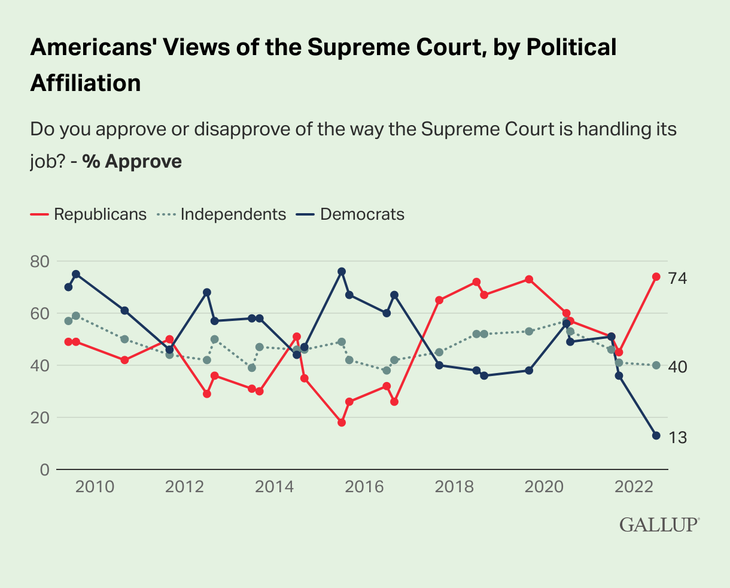 The amplitude of the reactions likely has to do with the nature of the cases decided this term, and the fact that a 6-3 conservative majority has a real impact on the decisions. That will make Republicans happy, who may have been skeptical about that proposition, and it makes Democrats unhappy in equal measure. However, this is only different in measure rather than effect, as Gallup’s chart shows.

The latter would be the most accurate, but wouldn’t get that sweet clickbait traffic we all secretly love while publicly sniffing at it. Can’t blame Gallup for trying, and at least they’re making an effort in putting a new spin on pouncing.