Krugman: C'mon, the bad-economy narrative is a media concoction

Far be it from me to argue with a longtime thought leader from the New York Times about media bias and narrative journalism. For that matter, CNN’s leading media watcher appears pretty sanguine about this explanation too. I wonder why.

But is Paul Krugman right — that the economy is actually healthy and that the media has blown a few negative metrics out of all proportion? That was the NYT’s lead economist’s argument yesterday to Brian Stelter on Reliable Sources, complaining that everyone thinks their own economy is going well and that their perspective on the national economy is only the result of Debbie Downerism by mainstream media.

Krugman: "If you ask people, 'How are you doing?', they’re pretty upbeat … If you ask people 'How is your financial situation?', it’s favorable. If you ask them, 'How is the economy?,' 'Oh, it’s terrible.' That’s a media failing." pic.twitter.com/90LLYpjZKT

STELTER: Yes, you’ve covered — you could call this a record divergence in these data points. So what do you want the press to be doing differently, and its day-by-day coverage of the economy?

KRUGMAN: Well, I think that the big problem has been that the coverage has tended, you know kind of bleeds, it leads, but this time and economic data, the negatives get all of the attention. And there’s a lot of polling that indicates that people — you know, it’s one thing for people to say, look, the inflation matters to me more than the job gains, but a plurality of voters appear to not be aware that we’ve been gaining jobs. You know, people just don’t know. They — people say they’ve heard more news items, reporting negative news on unemployment than positive. And unemployment has, of course, the economy’s good point.

So I think that what’s happening now is that there’s been a kind of a negativity bias in coverage just you know the press should be giving people. People have their own personal experiences. And if you ask people how are you doing? They are pretty — they’re pretty upbeat.

You know, there are signs that you know, people are complaining now especially, but things like gas prices, although those have come down in the last six weeks. But if you ask people how’s your financial situation? It’s pretty favorable. If you ask them, how’s the economy, they say, oh, it’s terrible. And that’s a media failing. Somehow, we’re failing to convey the realities of what’s going on to people.

Amusingly, Krugman then adds this on Reliable Sources:

STELTER: The New York Times recently asked you and a bunch of your colleagues to write a, I was wrong article, something you were wrong about. And here’s yours, Paul. I was wrong about inflation.

The actual realities of what’s going on show clearly in the data, and the main point is that the economy contracted two quarters in a row. I’m willing to hold off on declaring a recession for a couple of reasons, chiefly that the first quarter contraction was the product of a massive trade imbalance, but the second quarter’s trade imbalance was massively off in the other direction, too. Had trade been in perfect balance in Q2 (and remember that it’s usually in GDP-unfriendly deficit), the annualized GDP change would have been around -2.3%, not -0.9%. The contraction was obvious in Q2, even if it was arguable in Q1.

So this argument from Krugman is asinine on its face, especially after two successive negative quarters. The economy is not going in the right direction overall, even if employment numbers don’t indicate it at the moment. And the only reason it doesn’t is because we are still recovering jobs from the pandemic, not creating new jobs. Let’s review the calculation from the most recent jobs report:

For those keeping track, the new number of total jobs filled is now 151.98 million. That puts the US a little over a half-million jobs shy of the February 2020 figure of 152.504 million jobs filled, the last full month before the pandemic shutdowns destroyed 22 million jobs in April and May of the same year.

It means we have recovered 98% of the jobs lost since March 2020, but that is a static measurement. Population growth in the US — between 2 and 2.5 million per year — requires constant job growth to keep up the employment-population ratios and maintain a healthy economy. Even at a minimal population-growth assumption of 4 million over 28 months, we need an additional 2.4 million jobs to keep pace with the February 2020 dynamic status quo, so we are now about 2.9 million jobs shy of full recovery from the pandemic. …

Update: According to these figures, the US has added 3.8 million people over the last two years. At a 59% employment-population ratio, we needed to add 2,243,545 jobs in that period just to keep pace. That’s on top of the necessary job recovery to get us back to the nominal status quo ante jobs level in February 2020. That means we are still 2.7 million jobs shy of full recovery.

Is this a recession? Like Krugman, I think that question is irrelevant, but for other reasons. We can get into all sorts of precise definitions and technical metrics, but in the end, it doesn’t matter, either economically or politically. What matters is how  most people experience the economy, and that metric is clear in the GDP report data: they are getting the snot kicked out of them.

On Twitter, I responded to Krugman’s statement with disbelief:

That's insane. Real disposable personal income has declined for two quarters in a row. People are anxious about the economy for real reasons, not because of media coverage. 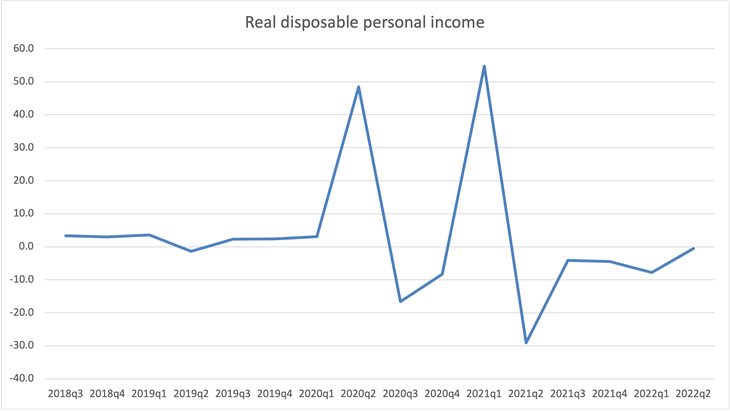 Previous to the pandemic, real DPI ran almost identical to nominal DPI — both slightly positive, a sign of both matured growth and controlled inflation. Only after 2021Q1, when two massive stimulus packages hit the economy, did those start to decouple: 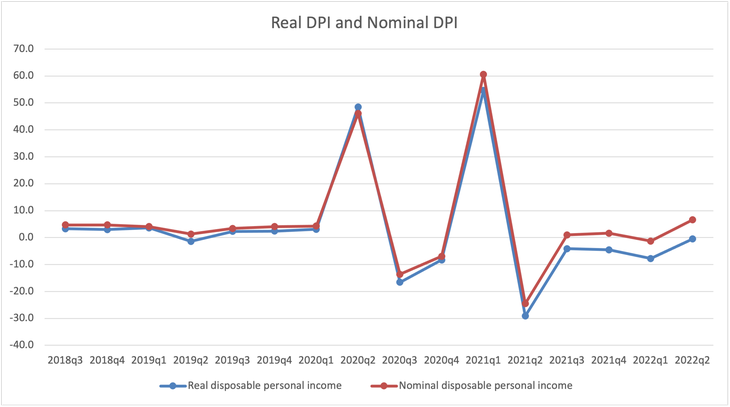 The decoupling comes from inflation running away. This comes out of the sugar highs of the stimulus bills, especially the last one, which turned out to be unnecessary. Note too that that these measures are compounding; each data point is in relation to the data point that precedes it. Therefore, it’s not just that consumers lost ground in 2022Q2, but that they are losing ground each quarter from the lost-ground position of the previous quarter. Not only that, but the decoupling has grown wider in each quarter since the last stimulus bill.

This clearly impacts the personal economy of every American household, but especially those on fixed incomes as well as lower- and middle-income households. This is not a media myth or an example of narrative journalism — it’s economic reality for everyone outside the Pauline Kael bubble of the NYT and CNN. This squeeze on real DPI is not just an indicator of “personal” recessions, it is a pretty good indicator that we are at the very least heading into an actual recession as people buy less and try to stretch their shrinking dollars. That would be true even if the Fed didn’t need to hike interest rates far higher than they have so far to slow inflation down, which they do — and which they will.

I can’t wait to hear Krugman’s happy talk when that happens, but that’s all this is now too. The economic misery that most Americans feel is no media concoction, but the clear erosion of their buying power in an inflationary wave not seen in 40 years, and completely unforeseen by Krugman. The real media concoction is Krugman’s attempt to gaslight the CNN audience, and Stelter’s happiness to host it.

Marking one year after the Afghanistan withdrawal debacle
Jazz Shaw Aug 08, 2022 8:01 AM ET