What set off Donald Trump this morning? The president started his day off as normal, Twitter guns blazing, taking aim at the United Kingdom’s National Health Service and heaping praise on Fox & Friends for “exposing the truth.” Then he turned his social-media attention to the ranking member of the House Intelligence Committee, Adam Schiff, bestowing on him a rather overused Trumpian nickname and accusing him of leaks:

One might assume that Trump is referring to the issues around the Devin Nunes memo, but that doesn’t make much sense. Schiff and other House Democrats wanted that memo to remain classified, arguing that releasing it would reveal sources and methods. It was Republicans who wanted it released, and Trump who agreed to do so.  As it turned out, the memo shouldn’t have been classified in the first place, and was improperly marked for a classified document anyway. (Each paragraph should have been marked with its appropriate classification level, and the classifying authorities should have been noted.)

If anyone’s leaking with the Nunes memo, it’s Trump, although, definitionally, presidents who declassify and officially release material aren’t “leaking.” This tweet instead seems to refer to a two-month-old grudge that Trump’s still nursing, and which arguably didn’t constitute a leak at all:

An aide to Rep. Adam Schiff, the top Democrat on the House Intelligence Committee, said Tuesday that neither he nor his staff leaked any “non-public information” about the testimony of Donald Trump Jr. last week, but his office defended his decision to tell reporters the president’s son had refused to answer a key question from the panel.

Schiff had told reporters that Trump Jr., who testified for nearly eight hours, would not reveal the details of a discussion he had with his father earlier this year, when news of a secret Trump Tower meeting between the younger Trump and Kremlin-linked people began seeping out.

Before and during the December 2017 hearing, the White House and Trump Jr himself publicly asserted that he was fully cooperating with the committee with his hearing appearance. Schiff and two other Democrats responded to that representation by disclosing that there were limits to that “full” cooperation. Republicans cried foul at the time, but Schiff stuck to his guns:

“[W]e do not permit witnesses to represent publicly that they are fully cooperating with our committee and privately refuse to answer questions pertinent to our investigation on the basis of meritless claims of privilege,” the statement continued. “When the Attorney General and Donald Trump Jr. did so, we raised the issue publicly and will continue to do so. While we do not discuss the substance of a witness’ testimony, we do reserve the right to inform the public of their noncooperation and do not allow them to conceal that behind closed doors.”

Was that even a leak? Not in a national-security sense, certainly. If one side makes public representations about what happens in closed session, then their opponents have to be given enough room to at least contradict those assertions. If that’s a leak, then Schiff is hardly among the “biggest liars and leakers in Washington.”

But all of this was water under the bridge for most people and largely forgotten. Why bring this up two months later and remind everyone that Don Jr was less than fully cooperative during his testimony? Schiff’s been getting a lot of face time on television, thanks to the controversy over the memo and the upcoming release of the Democratic response to it, and has used those platforms to criticize Trump. Trump always makes these kinds of fights personal and, as is his wont, obviously decided now was the time to punch back twice as hard — even if the reference is both obscure and off-point, and the nickname a retread that might speak more about Trump than it does about Schiff.

What’s the point of this attack? It’s difficult to suss out. Trump accuses Schiff of “being desperate to run for higher office,” which is precisely what Trump himself did in 2015-16. If Schiff has aspirations for a presidential run, it’s been kept unusually quiet for the 17 years Schiff has been in the House. His Los Angeles County district is a reliable D+23 and Schiff can win there as long as he likes, but he’s hardly been groomed for anything more significant; he didn’t even bother to jump into the fray when Barbara Boxer retired from the Senate.

But if he does harbor such ambitions, Schiff could hardly get a larger boost with Democrats around the country than by having Trump launch personal attacks on him. Talk about self-fulfilling prophecies. He’s all but guaranteed Schiff even more access to cable-net shows and a higher profile as a general Trump administration critic. And when they can’t get Schiff, they’ll find people to talk about Schiff, hailing him as the new hero of La Resistance, or at least a decent fellow whose demeanor provides a stark contrast to the man who’s supposed to be the leader of the free world. Trump’s not stopping Schiff; he’s launching him into a higher orbit. Yeah, this’ll work out great.

Rep. Karen Bass responds to Trump tweeting about her colleague Rep. Adam Schiff, calling him "Little Adam Schiff, who is desperate to run for higher office": "This is the President of the United States … It's an embarrassment on the international stage." pic.twitter.com/LBD9RFvVn9

Update: Schiff advises Trump to get out of the bedroom and turn off the TV:

Mr. President, I see you’ve had a busy morning of “Executive Time.” Instead of tweeting false smears, the American people would appreciate it if you turned off the TV and helped solve the funding crisis, protected Dreamers or…really anything else. https://t.co/lVqQRu2Gjl 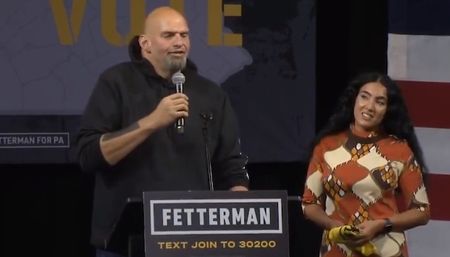