Actually, I don’t disagree with MSNBC’s Rachel Maddow on this point, but I do disagree with her on what it means.  Maddow argues that efforts to roll back collective bargaining privileges for unions — which she defines too broadly — means that unions will have less cash to spend on political activism, and that without the influx of that cash, Democrats simply can’t compete.  But Maddow blames that on the reforms when she should be blaming it on the Democrats themselves:

“The Wisconsin Republicans, under Scott Walker, were using public policy to essentially dismantle public sector unions in Wisconsin. And that — however you feel about union rights in the country — it had one very practical, partisan effect, which is that the unions had been big supporters of Democratic candidates and Democratic causes and had had a lot to do with the Democratic ground game. So if they go away — in terms of whether or not that corporate money that’s disproportionately supporting Republicans can be answered — at least on the Democratic side, before there is some kind of reform, Democrats do not have a way to compete in terms of big outside money in elections. And that is the reality now in Wisconsin. It is the reality in states where they have essentially eliminated unions rights.”

Democrats have every opportunity to raise the same kind of cash that Republicans do.  There are no industry assignments for donors to parties.  Barack Obama is in the middle of a two-day trip to raise $15 million in California, mainly from the entertainment industry, for instance.  Democrats have launched super-PACs and have their own sugar daddies like George Soros and Warren Buffett to match the Koch Brothers.

The problem for Democrats is that they have become the party of the public-employee unions, and therefore the party of institutionalized and unaccountable bureaucracies.  Maddow defines union reform too broadly; the reform in Wisconsin, for instance, dealt entirely with public-employee unions, not private-sector unions, and didn’t even include all PEUs.  Furthermore, the money raised by Republicans (and Democrats in other contexts) are entirely voluntary. Until Act 10 took effect in Wisconsin, the state seized dues on behalf of the unions whether employees wanted to fund the political efforts of the unions or not, which the unions then used to elect politicians that would keep enforcing those seizures.  Doesn’t Maddow have even a twinge of shame to see the vast exodus from the union membership after Act 10, which demonstrates that the only reason the “donations” for their political efforts was by force?

Democrats made the choice to become the party of institutionalized and unaccountable bureaucracy; in Wisconsin, they practically adopted that as a motto in the recall election.  They are now only beginning to realize that the public is fed up with the costs and gross inefficiencies of government at all levels, and especially of the sick relationship between PEUs and the politicians they help election.  In my column for The Fiscal Times today, I call this a watershed moment for the public-sector union movement:

Immediately, complaints arose over a disparity in financing between the two candidates in the recall election as an excuse for the unions’ failure.  Scott Walker raised a huge amount of money, a good portion from outside of Wisconsin, while Democrats and the unions circulated recall petitions.  However, the unions spent millions of dollars to get the recall election in the first place, and then provided a large boost to Barrett in organizing and GOTV efforts.  Those actually succeeded – turnout was high in Democratic areas – but Walker’s GOTV outpaced the union efforts as voters thundered to the polls to support the governor and his PEU reforms.

That is a bad sign for labor, with its modern reliance on organizing in the public sector.  Walker pulled back the green curtain on the unhealthy relationship between PEUs and politicians, which creates an accountability gap on spending and an obstacle to efficiency in government.  Instead of taxpayers controlling the size of government, the PEUs ensure that they control policy, mainly by forcing the state to fund political operations, through mandatory state-collected dues and ridiculously overpriced benefits from union-owned providers, such as the WEAC Trust in Wisconsin prior to the Act 10 reforms.

So yes, I agree with Maddow that Democrats can’t compete in the future with the kind of funding disparity that results when unions can no longer seize parts of workers’ paychecks without asking.  But Democrats can’t compete because of their alliance with these union bosses and the sclerotic, entrenched bureaucracies they spawn and grow.  If Democrats really want to compete, they need a reality check with actual voters rather than kissing the rings of Big Labor. 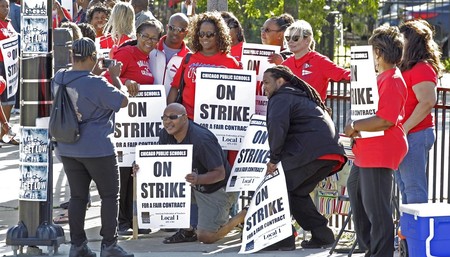 GOP Rep Shreds Biden's State of the Union in Less Than Three Minutes
Townhall
AWKWARD! Watch Rep. Byron Donalds paint former Twitter execs into quite a corner
Twitchy
Biden Blithely Admits One of Documents FBI Seized Is From 1974 in Troubling PBS Interview
Redstate
BREAKING: James O’Keefe Put on Leave at Project Veritas. Has There Been a Coup?
PJ Media