Just a few weeks ago, the Star Tribune showed state Rep. Tom Emmer trailing badly in the Minnesota gubernatorial race to former US Senator Mark Dayton.  Their Minnesota poll showed a pre-primary Dayton leading by ten points, 40/30, with Independence Party candidate Tom Horner coming in at 13%.  Minnesota Public Radio’s latest poll suggests that either Dayton has lost significant ground by winning that primary, or the Strib poll performed about as well as it ever does in predicting elections:

Republican Tom Emmer and Democrat Mark Dayton are running are running even in the 2010 race for governor according to a new MPR News-Humphrey Institute Poll. …

A fifth of likely voters are undecided. Defections of both Democrats and Republicans from their party’s candidates and splits among key voting groups also contribute to the tight race.

Mitch Berg analyzes the survey and likes what he sees:

The poll – which focuses on likely voters, whom conventional wisdom says tend to break for the GOP – shows that the money Dayton’s spent on his soft-money smear campaign so far is just keeping things close in a year that’s going to be terrible for Dems, even in Minnesota.

It also shows that Emmer is losing some of the “base”.  Part of that is that the “base” is so ill-defined; I’m not sure how MPR identified “Republicans”; there’s a big difference between someone whose total identification is having voted for McCain in 2008 versus someone who went to the precinct caucuses.  The former is much more likely to defect, I’m going to guess.  More to the point, a fair chunk of respondents showed some degree of “Pawlenty fatigue” – while they may have voted Republican, these are not the kind of voters who are motivated by principles and policy specifics; they vote on the sort of surface-y things that the “Alliance for a Better Minnesota” campaign has focused on.

And yet for all of Dayton’s family’s millions in the race, it’s deadlocked, in a poll that has trended slightly Dayton so far.

Mitch also notices something curious in the demographics.  Women only favor Dayton by seven points, while men favor Emmer by eight.  That’s a surprisingly narrow gender gap for Minnesota, and suggests that Dayton may already be faltering among one of the DFL’s main constituencies. Mitch also points out that Emmer does surprisingly well among those with college educations, a hint that yet another constituency may be faltering for Dayton and the DFL (the Minnesota version of the Democratic Party).

MPR also pays close attention to the drag on the candidates from Governor Tim Pawlenty and President Barack Obama, and declares it a wash. However, it’s worth noting that Pawlenty has a positive job approval rating in this poll, although barely at 46/45.  Obama won the popular vote here in 2008 by slightly over ten points, but now gets an underwater job approval rating of 42/52.  Which rating will be more likely to motivate voters, especially since Pawlenty isn’t running for office in this cycle and thus will be much less relevant to voters coming to the polls in November?

The race may be too close to call, but there’s one more factor that MPR ignores.  Dayton’s numbers come after a multimillion-dollar campaign this summer in which Emmer got outspent 16:1 in the state, as Emmer kept his powder dry for the fall campaign.  Emmer has just now begun to air spots on television and hammer Dayton on taxes and spending.  If the race is truly a dead heat at the moment, that may change significantly now that Emmer’s finding his voice.  It’s certainly a lot more winnable than the Star-Tribune’s routinely ridiculous Minnesota Poll suggested. 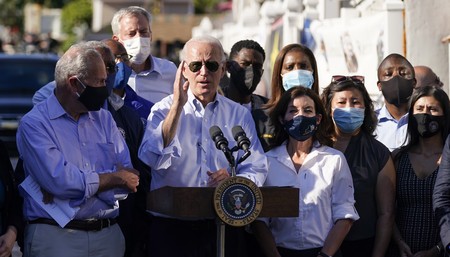