Black Georgians give thumbs up to elections process

Remember when every Leftist in the universe complained about Georgia’s voter integrity law?

Biden called it Jim Crow 2.0. Voter suppression. It would destroy democracy. Stacey Abrams made a career out of denouncing her state. The woke went wild in fake outrage.

Major League Baseball was so incensed that they moved the All Star game out of the state to protest how racist the Georgia State Legislature was.

Georgia Republicans passed restrictive changes to the state elections and Kemp signed it into law.

That's why the all star game was pulled.https://t.co/Q92qzFsLOu

Major League Baseball was absolutely incensed by the changes to voting laws that Georgia passed in 2021. From their statement:

“Over the last week, we have engaged in thoughtful conversations with Clubs, former and current players, the Players Association, and The Players Alliance, among others, to listen to their views. I have decided that the best way to demonstrate our values as a sport is by relocating this year’s All-Star Game and MLB Draft.

“Major League Baseball fundamentally supports voting rights for all Americans and opposes restrictions to the ballot box. In 2020, MLB became the first professional sports league to join the non-partisan Civic Alliance to help build a future in which everyone participates in shaping the United States. We proudly used our platform to encourage baseball fans and communities throughout our country to perform their civic duty and actively participate in the voting process. Fair access to voting continues to have our game’s unwavering support.

So there was unanimity among the Elite that Georgia was suppressing Black votes.

In fact, Stacey Abrams still insists that voter suppression is a thing in Georgia:

.@staceyabrams: "Voter suppression is baked into the DNA of our election system. But so is the persistence that we see from voters who are willing to fight against that very ignominy."

Nobody bothered to ask Georgia Blacks, though, what they thought about the law until this year. The University of Georgia School of Public Affairs decided to do so and discovered something remarkable: 0% of Black voters said their voting experience was poor; more Whites, although only 1%, said the same.

Well over 90% of voters said that their experience was “good” or “excellent,” heavily weighted to “excellent.” 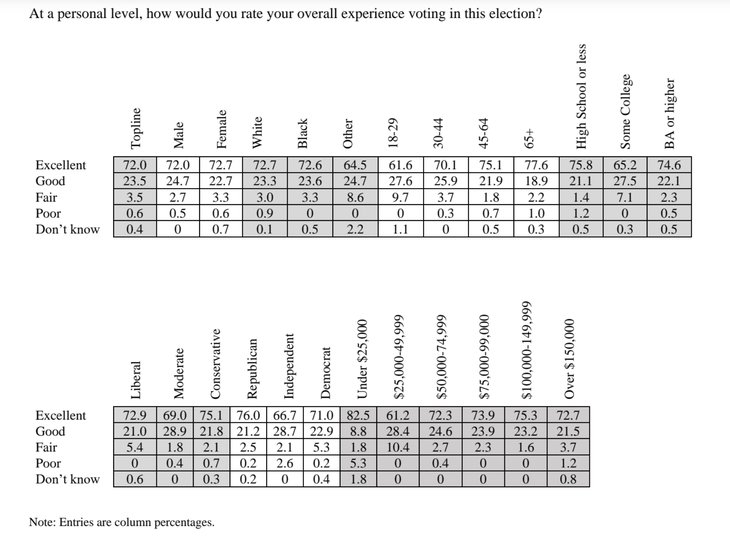 Georgians, it turned out, like how things changed. And there were no racial differences in satisfaction.

The whole “Jim Crow 2.0” meme was nothing but a smear. Nobody who said it believed that it was true. The only reason they said it was to convince low-information voters that Republicans have some vicious anti-Black bias.

Do you think that Democrats will look at the overwhelming satisfaction that Black voters have with the elections system in Georgia and quit lying about voter suppression?

Of course not. The Democrats, the MSM, the major woke corporations, and the President of the United States will keep spewing their vicious lies as long as it gets them votes. Slander is their modus operandi.

Major League Baseball should cut a large check to every small business owner they screwed over, apologize to the people of Georgia, and promise to keep their mouths shut when tempted to make ignorant proclamations about political matters.

Fat chance. All of these people will carry on because none of them gives a whit about truth or fairness.

Gallup: the biggest problem facing America is its own government
Jazz Shaw 2:31 PM on January 31, 2023

Biden Sent McCarthy a Staff Memo to Negotiate the Debt Ceiling. It Did Not Go Well.
Townhall
Ryan Long stunningly and bravely reveals 'the harassment men have to deal with at the gym'
Twitchy
BOMBSHELL: FBI Searched the Penn Biden Center in November, White House Misled the Public
Redstate
Insanity Wrap: We Need to Talk About That Trans Figure Skater
PJ Media