A horrific mass shooting took place at a Lunar New Year celebration in Monterey Park, CA, which is located near Los Angeles.

Ten people were killed, and at least that many were injured. The victims were Asian, and the internet exploded with both horror and outrage at this example of growing anti-Asian hate. Time to ban White people or something.

For almost a day the police only described the assailant as “male,” and the presumption of most leftists was that of course he must be White. I presumed he wasn’t, because were he it would be all over the internet.

Shockingly, nobody seemed to question the fact that he was male, despite not having had the opportunity to ask the perpetrator his gender. How could they know without asking? Were they just assuming his gender?

Except the perpetrator was not White, and the motive had nothing to do with race hate. The perpetrator was Asian, although we still don’t know his gender since he was eventually found dead. Perhaps we will never know the person’s pronouns the moment he committed the crime, nor whether he had some other fetish that determined his identity.

The affair, despite being utterly horrific, was just too good an opportunity to cry “racism” despite the complete lack of evidence.

There’s nothing shocking about people on Twitter jumping to conclusions, of course. Twitter exists mainly for people to dump half-digested thoughts into the universe, especially if you can signal your virtue while doing so.

But what was striking but unsurprising was the explosion of rage at awful White Supremacists coming from the Left. Without a moment’s thought Democrat politicians and grifters spewed their accusations despite knowing precisely nothing about the perpetrator. Remember, the full description was “male” when these tweets went out.

Arizona governor Katie Hobbs was certain that the shooting was caused by hatred for the “AAPI” community (Asian American, Pacific Islanders), of course. Governor Hobbs is the epitome of the whiny white woman who is always certain about things despite complete ignorance of the facts. 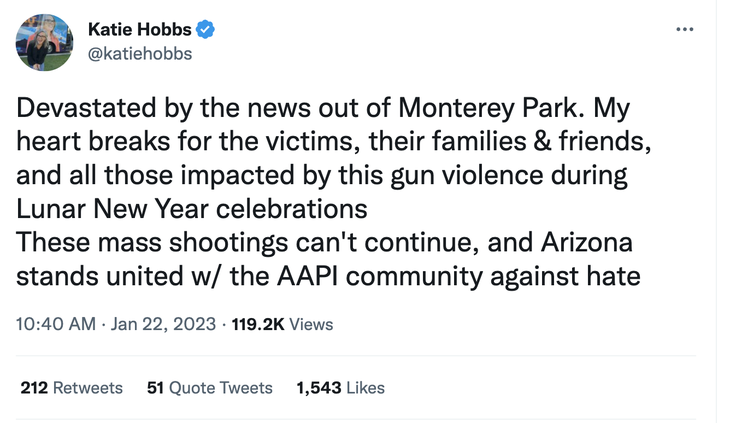 Chuck Schumer, too,  jumped up ready to fight bigotry wherever it rears its ugly head. Good on him! Without youthful Senator Schumer standing up for Asians and other victims of hate their would be daily pogroms.

Rep. Hakeem Jeffries, House Minority Leader and famed election denier, is ready to “crush the rise of hatred and intolerance whenever and wherever it is found.” This is stunning and brave of him, I must say. I wouldn’t want to be on his bad side, since he is ready and willing to crush away when the mood strikes.

Adam Schiff, God bless him, at least allowed for the possibility that hatred against AAPI individuals might not be the cause of the shooting, although he of course has to throw the likelihood out there because slandering people is sort of his shtick. But I have to admit I am impressed he didn’t blame this on anybody orange, so that is a major step up for him.

Mayor Lori Lightfoot of Chicago, though, continues her unbroken record of being horribly wrong and destructive. Famously unconcerned about violence in her own city–there were 2200 shootings in the city in 2022–she is able to feel empathy for Californians at least. As a black lesbian woman she shows little care for the large number of young black males who get killed in her city–apparently because race was not a motivating factor–but she can get outraged about the California shooting because she assumed race was involved.

Of course it wasn’t, so she can go back to her indifference to the deaths of innocent people.

Amnesty International, too, was all-in on the White Supremacy explanation, evidence be damned. Amnesty is remarkably good at finding hate in every corner of Western Culture, but is rather more choosy in other circumstances. 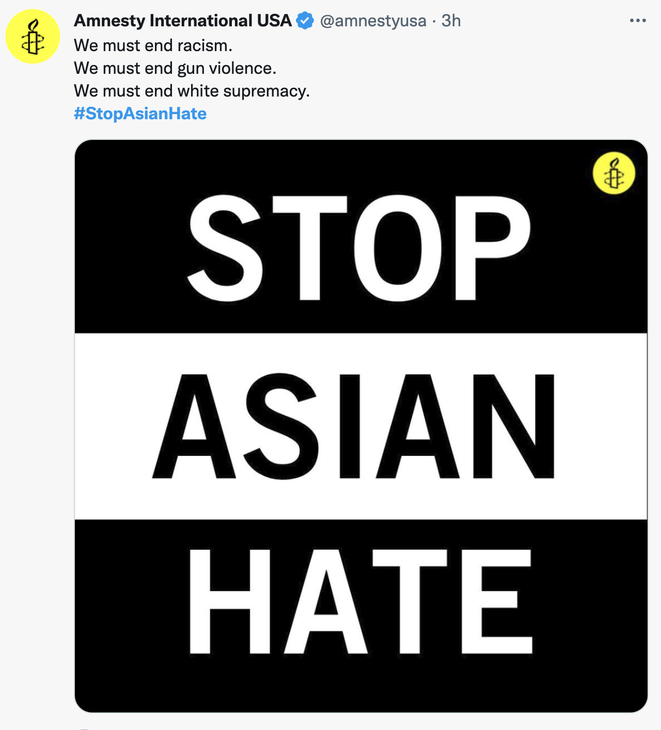 There are countless other examples from people both prominent and less so. The narrative was chosen, pushed out, and repeated ad nauseum. The point was to firmly establish in people’s minds that this was a hate crime perpetrated by White people, regardless of the facts.

That impression will persist, I assure you, despite it being based entirely on a fantasy.

If the victims were White and the perpetrator were Middle Eastern, we would be repeatedly cautioned about not jumping to conclusions because that would be racist. All of us know that. When such incidents were more common than today, we were lectured to ignore the obvious, because not doing so was bigoted.

Bigotry is, we are told, solely a white phenomenon. Literally nobody else can be racist, you see, because racism is not distinguished by people hating others due to their race, but by existing as a White person. A person is racist because they are both White and alive.

Only about 15% of the world population is considered “White,” which means that 85% of the world is incapable of hatred. Good to know. I always thought that human beings are fallen and all capable of sin, but apparently it is only White people.

The shooter, of course, was a 72 year-old Asian: 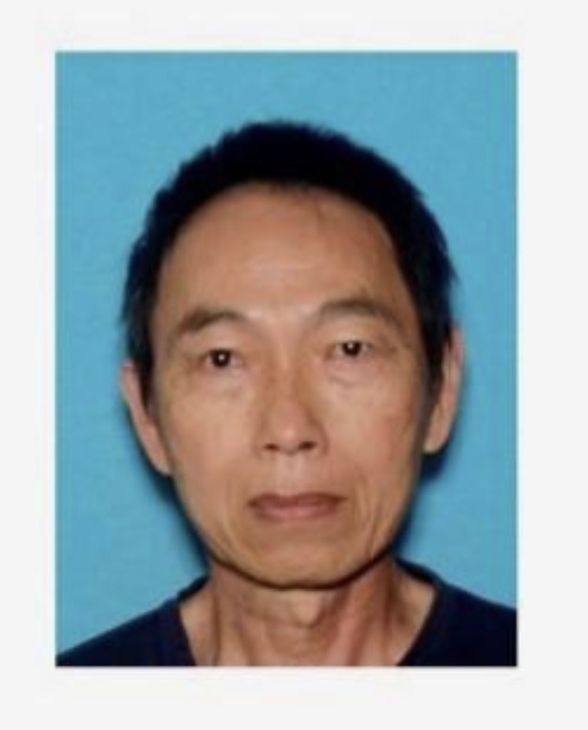 But that didn’t stop people from tweeting things like this even after it became clear who committed the crime. The original tweet went out before the person was identified, but Erica Marsh retweeted it after it was revealed that the perpetrator was an older Asian man. Because her followers–nearly 100,000 of them–will likely believe her and not her lying eyes. After all, she worked for both Obama and Biden and thus is a good person. 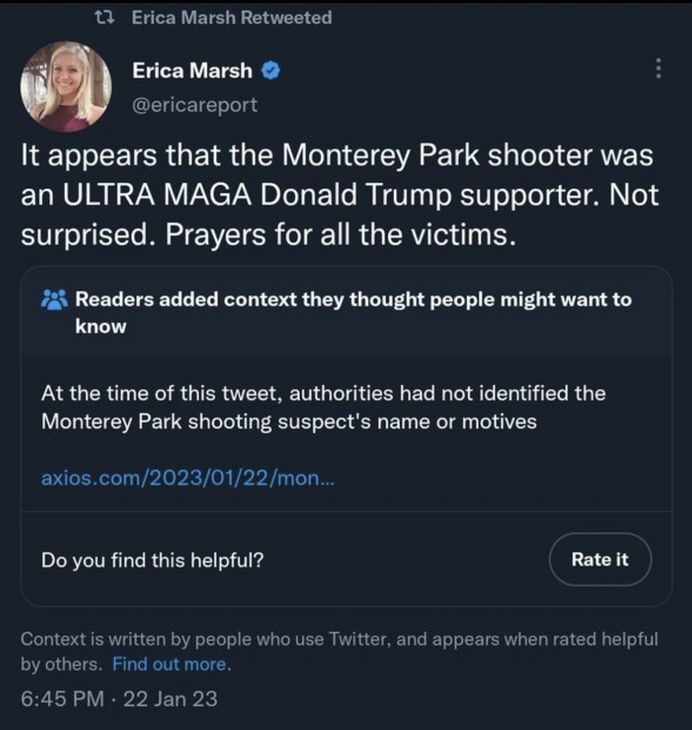 I expect the mass shooting to get downplayed now that it doesn’t fit the “Asian hate” narrative, despite the same number of people having been killed and injured. Worse for the Left, the gun involved was not an assault rifle but a pistol, although I saw it referred to as a “magazine fed assault pistol,” which could be used to describe any pistol but a revolver.

Recent reports described the incident as a “domestic dispute,” which makes the crime no less horrific. But it makes it less useful.

And as we know, the usefulness to The Narrative™ is what really matters.