WaPo analyst: Democrats are fooling themselves on midterm turnout

Democrats and their MSM allies have been whistling past the graveyard when it comes to the 2022 elections.

No question that the Dobbs decision sending abortion policy back to the states has mobilized an important segment of the Democrat constituency, and not just the death cult wing of the Party. Lots of normal suburban moms support first-trimester abortion choice, and even those who are squeamish about the “abortion until birth” crowd worry that Republicans in some states are going to go too far in banning all forms of abortion. These folks are inclined to let women, not politicians, make these decisions. They are more inclined to vote for Democrats than several months ago.

(I am pro-life, but I don’t believe that all people who consider themselves “pro-choice” are itching to kill off babies. Just some of them are.)

The changed political landscape has given a lot of Democrats (probably false) hope that they can retain the majority in the House of Representatives and perhaps gain stronger control of the US Senate.

The Washington Post has some bad news for them, though. They are probably screwed if they still believe this.

On Monday the Post published an Opinion piece by David Byler, a data analyst and political columnist who used to work at RealClearPolitics. He did something that most political reporters are too lazy to do: dive into the numbers and look at how elections have turned out in the past. You may have noticed that a lot of the horse race polls have shown that Republicans aren’t doing as well as expected, and Republicans have gotten a bit nervous about what is going on.

The thing is that the polls have a terrible track record of predicting close elections. They suck. Like really bad. They always underestimate Republican turnout.

So Byler looked at more reliable indicators, and behold! If this election is anything like other recent elections, things look pretty good for Republicans.

As early voting begins around the country, every political data point would appear to marginally favor the Democrats. Polls suggest they lead ever so slightly in key Senate races and in national House polls. Their candidates are raking in cash, while Republicans struggle financially. And in special elections following the end of Roe v. Wade, Democratic turnout soared.

But one key indicator — primary turnout — looks better for the GOP.

According to pollster John Couvillon, 52 percent of 2022 primary voters cast ballots in GOP races, while 48 percent voted in Democratic races. That’s a good sign for Republicans. High primary turnout signals enthusiasm for the general election — and the party with the stronger primary turnout typically does better in the midterms.

We don’t yet know whether this pattern will repeat in November. But a thorough examination of the data shows that Republicans do have a primary turnout advantage — even considering Dobbs and the other complexities of this election cycle.

Hmmm. Data? Who needs stinking data when you can write stories that comfort your own nervous readers who desperately want Democrats to do well? The MSM knows its audience, so most reporters have tailored their stories to suit them. It is just good business at a time when media outlets are scrambling to stay alive.

Here’s the chart Byler made showing recent history. Turnout in the General election is predicted well by turnout in primaries. 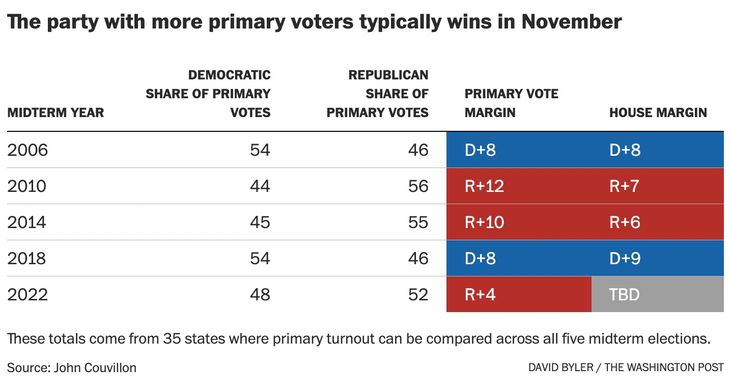 I would say that the chart shows a pretty high correlation between turnout in primaries and turnout in general elections. Just spitballing here. As you can see, Republican turnout is really high, which bodes well for Republicans this November.

Measured by total votes, the GOP is the strongest it has been in five midterm elections.

The GOP surge is broad-based: In 33 of the states that Couvillon tracked, Republicans added votes to their 2018 totals. Democrats increased their vote total in only 16 states.

Things did change after the Dobbs decision, but not nearly enough to ensure that Democrats are secure. Democrat turnout popped as voters got engaged with issues other than how badly Biden has done as president. But Biden is still doing badly as president and the Dems have to overcome the disadvantage of having a party leader whose intellectual power compares unfavorably to oatmeal. 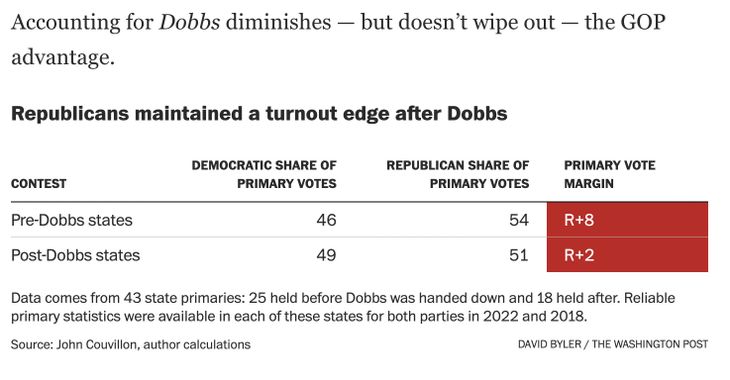 All in all, the news is still bad for Democrats. Republicans have probably lost the chance to pick up really marginal seats, but they still have a significant advantage in competitive races. I still believe they have a decent shot at taking the Senate, but I have a terrible track record in predicting election outcomes. My intestinal flora must be off because my gut feelings are generally wrong.

In this case, though, I am looking at hard data, and that data says Democrats are probably screwed.

UPDATED to correct a term.