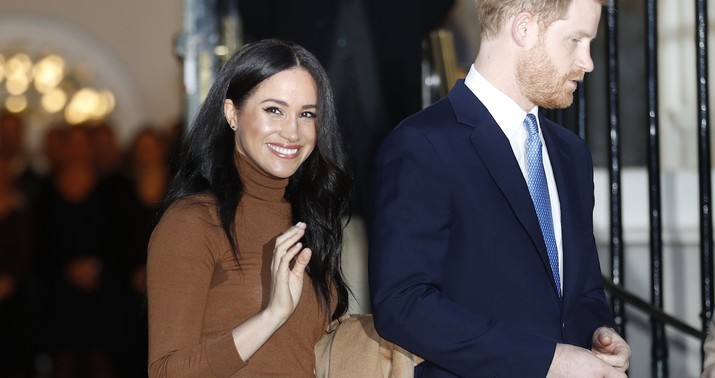 The Duchess of Sussex, a.k.a. American D-list actress Meghan Markle, is joining up with former First Lady Michelle Obama in an effort to encourage women to register to vote. The event is a “couch party” promoted by When We All Vote which has a goal to reach 300,000 eligible female voters in honor of the passage of the 19th Amendment. It takes place tonight so Michelle will be fresh off her dark and ugly speech delivered at the Democrat convention. Other guests scheduled are Valerie Jarrett, Glamour editor-in-chief Samantha Barry, who is a When We All Vote board chair, and actress Yvette Nicole Brown.

Thursday is the final day of the When All Women Vote Week of Action (I guess it’s a four-day workweek). When We All Vote has partnered with The United State of Women for the event. The virtual couch party with the celebrities and public figures is the week’s grand finale. The United State of Women is a national organization dedicated to convening, connecting, and amplifying voices in the fight for full gender equity, according to its website. It came from the Obama Administration’s White House Council on Women and Girls. So, all the insistence that both When We Vote and The United State of Women are nonpartisan organizations is not likely, especially since we know the political leanings of the headliners of their events. They ain’t conservative. We know that the Obama administration was highly divisive and partisan so the prissy claims of nonpartisanship (probably mostly for non-profit tax code reasons) warrant a word Biden uses – malarkey.

Meghan Markle is a far-left political activist. Now that she has convinced her husband to leave the world of his royal family and move to southern California, the royal couple finds themselves friends with the Obamas. Meghan has been vocal in the past about her opposition to President Trump and Trump ended up telling a reporter that she sounds like a nasty person over her remarks about him. In August she told Marie Claire magazine that she plans to vote in the presidential election, which is a bit awkward, given that the members of the royal family aren’t supposed to involve themselves in politics.

“I know what it’s like to have a voice, and also what it’s like to feel voiceless,” she said. “I also know that so many men and women have put their lives on the line for us to be heard. And that opportunity, that fundamental right, is in our ability to exercise our right to vote and to make all of our voices heard.”

While Markle did not say in the interview whom she will support, she publicly voiced opposition to President Trump before joining the royal family in 2016. She called him “divisive’ and “misogynistic.”

Meghan’s spokesperson told Newsweek, “The duchess is excited and honored to be able to speak briefly to the group about the value of women being civically engaged. The gathering is not partisan in nature and will focus on empowering women and strengthening democracy.” Insert laugh track. She has been busy appearing at virtual political events. For example, last week I wrote about a virtual event with a recently launched nonprofit news organization where Hillary was a big name speaker. Meghan participated, too.

Though Meghan and her husband, Prince Harry, have stepped back from royal duties, they still retain their titles and are members of the royal family.

Royal family members are traditionally expected to remain politically neutral, but the Duke and Duchess of Sussex stepped down as senior royals in March.

The Duchess of Sussex was said to be “frustrated” by the strictly apolitical stance she had to take after marrying Prince Harry, but believes she can now speak freely after the pair quit as working royals.

According to the Daily Mail, friends say the actress “has strong political opinions and will now take advantage of the greater freedom she has to express them publicly”.

Meghan is an American and also a woke Royal. She and Prince Harry, also woke, are “pro–having it and pro–eating it, with one foot in the royal family and the other in an American lifestyle in California.

In Britain, royalty and politics are not supposed to mix. The monarchy has a defined constitutional role as the “dignified” branch, symbolizing the state through ceremony and duty; the government as the “efficient” branch, running the country by passing laws through Parliament, which is elected. The two cannot mix. One is apolitical and unifying, the other political and inherently divisive. The royal family’s website puts it succinctly: “As Head of State The Queen has to remain strictly neutral with respect to political matters.”

Harry and Meghan’s popularity is, in part, tied to this unifying neutrality. Choosing to intervene politically might give them a quick hit of satisfaction but erodes the basis of their popularity. Once they start to behave like ordinary people, giving ordinary opinions, then people will treat them as ordinary. Certainly, anyone can understand Harry and Meghan’s desire to be independent, to say what they believe, to give themselves something to do and stand for. But ask any politician: That is not cost free.

The cost for these two is that the Brits are not enamored with Meghan. They see her for what she is – an opportunist who is living large now due to her place in the royal family. Brits don’t appreciate her using the title to reap celebrity and personal gain.

One Twitter user said: “She wants to delve into American politics she should give up her royal titles, tell Harry’s daddy they don’t need his money anymore and Harry and his son should abdicate from the line of succession.”

Another added: “It’s bizarre. She needs to drop the title!”

And one wrote: “But as an American, she shouldn’t be voting w/ a royal title.

“It’s not rocket science. She can be Meghan Mountbatten-Windsor.”

The struggle is real.