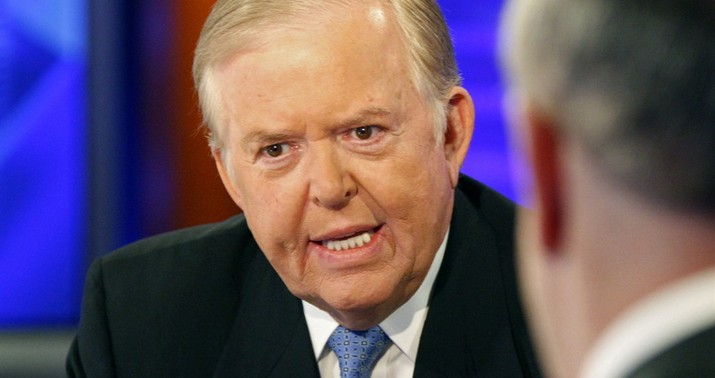 After a decade at the network, Fox has canceled Lou Dobbs show on Fox Business and has no plans to have him back on the air.

Dobbs’ program, which airs twice nightly at 5 and 7 p.m. Eastern on the Fox Business Network, will have its final airing Friday, according to a Fox News representative who confirmed the cancellation. Starting next week, the program will be called “Fox Business Tonight,” with rotating substitute hosts Jackie DeAngelis and David Asman, who filled in for Dobbs on Friday.

Dobbs, 75, remains under contract at Fox News but he will in all likelihood not appear on the company’s networks again.

At least one important fan praised Dobbs and said he was looking forward to whatever he did next:

“Lou Dobbs is and was great,” Mr. Trump said in a statement on Friday after the news of Mr. Dobbs’s departure. “Nobody loves America more than Lou. He had a large and loyal following that will be watching closely for his next move, and that following includes me.”

There’s a pretty obvious reason for this decision. This week Smartmatic filed a $2.7 billion lawsuit against Fox News, one that specifically named Lou Dobbs and two other hosts.

The suit cited a false claim, made on a November episode of Mr. Dobbs’s show on Fox Business, that Hugo Chávez, the deceased president of Venezuela, had a hand in the creation of Smartmatic technology, designing it so that the votes it processed could be changed undetected. (Mr. Chávez, who died in 2013, did not have anything to do with Smartmatic.)

I wonder if Maria Bartiromo and Jeanine Pirro, the other two hosts named in the lawsuit, are going to be next. But according to the LA Times, Dobbs was on the bubble even before the lawsuit.

I don’t know if the lawsuit was the final straw. You could probably make a counter-argument that firing Dobbs now looks like an admission they think he did something wrong. My guess is that this suit will never get to court. Fox will probably settle this for an undisclosed (but substantially smaller) sum rather than spend the money to defend it in court.

As for Dobbs, he’s 75-years-old. He’s probably worth a mint after a long career at the top of his industry and could easily retire in comfort. Or, he could try to find a job at OAN or one of the Fox rivals on the right. With his show ending today, we could know something about his future plans fairly soon.

“As we said in October, FOX News Media regularly considers programming changes and plans have been in place to launch new formats as appropriate post-election, including on FOX Business – this is part of those planned changes. A new 5PM program will be announced in the near future.”