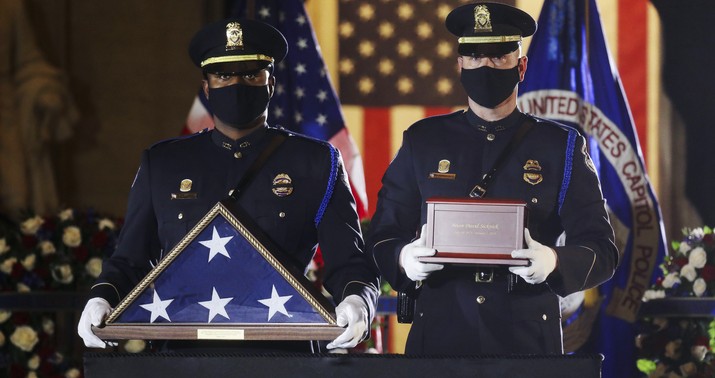 It’s still not completely clear how Officer Brian Sicknick was fatally injured during the Capitol riot but one report said he was hit in the head with a fire extinguisher. He went back to his office after the attack where he collapsed. He was taken to the hospital but died the following night. Yesterday CNN reported that investigators trying to identify those directly responsible have been unable to do so thus far:

Investigators are struggling to build a federal murder case regarding fallen US Capitol Police officer Brian Sicknick, vexed by a lack of evidence that could prove someone caused his death as he defended the Capitol during last month’s insurrection.

Authorities have reviewed video and photographs that show Sicknick engaging with rioters amid the siege but have yet to identify a moment in which he suffered his fatal injuries, law enforcement officials familiar with the matter said.

Starting last night, Sicknick’s fellow officers as well as members of congress and President Biden paid final respects to him in the Capitol rotunda. Here’s the solemn scene as his remains were brought in:

President Biden and the First Lady paid their respects. They both put their hands over their hearts and then Biden crossed himself.

Today, the flag over the Capitol was at half staff:

Flag at the Capitol is at half staff as Officer Sicknick is honored inside. pic.twitter.com/wScsobT8mw

Speaker Pelosi spoke at a memorial service attended by his family:

Capitol Police Officer #BrianSicknick lived a life of honor, service, and sacrifice that will never be forgotten.

All who knew Officer Sicknick loved and respected him for how he treated others and for his love of country. Today, his country honors him and mourns his loss. pic.twitter.com/1hBfMVL4xN

One of his fellow officers saluted:

There were also a lot of tributes posted on social media:

Thank you for defending us.

Thank you for defending the Capitol.

Thank you for defending our Democracy.

You will never be forgotten. pic.twitter.com/t9bouhUqU8

Very moving tribute to Officer Brian Sicknick who was killed in the Capitol Hill riots on January 6. He was a true hero, serving his country as a police officer and a member of the Air Force. My prayers are with his family and friends. May he rest in peace.

When a violent mob desecrated the Capitol, Officer Sicknick met it with bravery, devotion, and unmatched courage. His heroism not only helped save lives, it valiantly protected every American’s way of life.

Congress and the entire nation owe him a debt of gratitude. pic.twitter.com/y64vVcZJ1P

This may be the last thing in Washington that people on both sides of the aisle can agree on:

We honor Officer Brian Sicknick: a New Jersey native, an Air National Guard veteran, and a twelve-year member of the Capitol Police Force.

A peacekeeper, not only in duty but in spirit.

His heroism helped save lives and defend this temple of our democracy. pic.twitter.com/MsLiYoy4Ca

Today we shared a solemn moment of remembrance of a hero who gave the greatest devotion possible to the country he loved. We owe Officer Sicknick a debt that can never be repaid. pic.twitter.com/jRyDwqJAlh

After the ceremony was over, Sicknick’s remains were removed from the Capitol and taken for burial in Arlington Cemetery. Police and fire fighters escorted him and lined his path:

APD participated in the memorial service for fallen U.S. Capitol Police Officer Brian Sicknick. Our officers rendered honors for Ofc. Sicknick, and joined the escort from the U.S. Capitol to Arlington National Cemetery. Our prayers are with his family and friends. pic.twitter.com/R8dbUp3Ssw