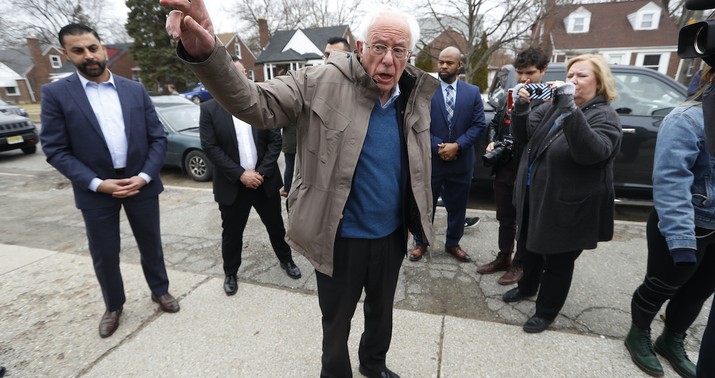 You probably saw those images of Bernie Sanders wearing a warm coat and mittens at the inauguration. A lot of people found the image amusing and the photo spawned a thousand memes. To his credit, Sanders quickly marketed the image for t-shirts and mugs and raised about $1.8 million dollars in a less than a week. He then donated the money to a list of Vermont charities.

As far as viral behavior on social media goes, this was pretty harmless and even seems to have benefitted some people in Sanders’ home state. I’m certainly no fan of Sanders’ politics, but I really don’t see a lot to complain about here. But a public school teacher in San Francisco did see a big problem. Ingrid Seyer-Ochi wrote a piece for the Chronicle arguing that Sanders’ mittens were evidence of white supremacy:

We’ve been studying diversity and discrimination in the United States; my students were ready. What did they see? They saw a white man in a puffy jacket and huge mittens, distant not only in his social distancing, but in his demeanor and attire…

A wealthy, incredibly well-educated and -privileged white man, showing up for perhaps the most important ritual of the decade, in a puffy jacket and huge mittens.

Sen. Sanders is no white supremacist insurrectionist. But he manifests privilege, white privilege, male privilege and class privilege, in ways that my students could see and feel…

I don’t know many poor, or working class, or female, or struggling-to-be-taken-seriously folk who would show up at the inauguration of our 46th president dressed like Bernie.

To be blunt, this strikes me as incredibly stupid. The writer is criticizing Sanders for not dressing up enough. In other words, if he’d worn an expensive cashmere overcoat with matching gloves, that would have been less indicative of white supremacy than the more ordinary winter coat and mittens he was wearing over his suit. She’s arguing that Bernie could only get away with this more modest outfit because he’s a white man.

Let me suggest another explanation: Bernie was cold. It was in the 30s that day and windy as well. The wind chill made it feel like the low 30s. Bernie Sanders is 79 years old and can’t shrug off a long time spent sitting in the cold the way someone 39 years old could. So he wore a heavy winter jacket and big mittens to keep warm and he folded his legs and arms to keep the heat in. By the way, he’s worn that same jacket before. The photo above is from last March. This is his winter coat. That’s it. No white supremacy involved.

My one criticism is that he’d have been a lot warmer if he’d worn a hat over his bald head. Other people were wearing hats as you can see in the photo. But I don’t see any evidence he was trying to show disrespect for the moment or the people he campaigned for. And as mentioned above, when his image went viral, he tried to turn it into something positive. So as much as I’d love to take a shot at Sanders, this argument is just kooky.

What’s really worrisome is that the author has apparently convinced her students the photo above is proof of white supremacy. That sort of silly analysis won’t serve them well anywhere outside of the far left bubble on Twitter. Hopefully they’ll grow up and grow out of this nonsense. I’ll close this up with a couple of other reactions:

What fresh hell is this take, I don’t even understand. The dude wore mittens and a big coat because it was cold and then he turned around and raised a ton of money for charity https://t.co/q3oWVLxU6e

What a stupid and appalling article: all based on how Bernie dressed. As stupid and gross as it is, it represents a large and growing sector of left-liberal thought: https://t.co/ogWOwJ7HoL

Jesus, do they not have editors at @sfc_opinions? This column denouncing Bernie-mittens as white privilege makes Thomas Friedman read like Tolstoy. https://t.co/VtC8YNRpSO

The revolution eats its own. https://t.co/KlveivaF8V

Now they're after Bernie. You may think you're safe from Critical Race Theory, but no one is. https://t.co/Js5SEPjah5