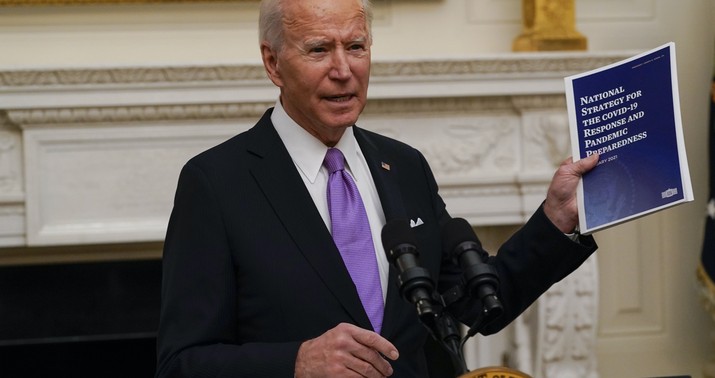 Last Thursday, on his first full day as President, Joe Biden signed an executive order to invoke the Defense Production Act (DPA) to speed up production of the coronavirus vaccine. The move got a lot of media attention but will it actually make a difference? The answer is probably not anytime soon.

Vaccine makers Moderna and Pfizer-BioNTech are running their factories full tilt and are under enormous pressure to expand production or collaborate with other drug companies to set up additional assembly lines. That pressure is only growing as new viral variants of the virus threaten to launch the country into a deadlier phase of the pandemic…

“The big problem is that even if you can get the raw material and get the infrastructure set up, how do you get a company that is already producing at maximum capacity to go beyond that maximum capacity?” said Lawrence Gostin, a professor of global health law at Georgetown University.

Ordering the companies to work 24/7 “would be a naïve solution,” said Dr. Nicole Lurie, a senior adviser to the CEO of the Coalition for Epidemic Preparedness Innovations, an international group that finances vaccines for emerging diseases. “They’re probably already doing that to the extent they have the raw materials.”

Kaiser Health News isn’t the first or only site to point this out. Last week the NY Times said something similar, though it was buried in a story about vaccine supply. This story notes that the Trump administration was already using the DPA to give vaccine makers priority to raw ingredients:

Vaccine experts and the companies themselves have said that at least in the short term, using the Defense Production Act will not significantly increase supply, although every little bit could help. That’s because manufacturing facilities are already at or near capacity, and there is a worldwide race to develop vaccines that use a finite amount of resources.

Although the Trump administration was criticized for not using the Defense Production Act more aggressively to ramp up production of testing supplies and protective gear, it did use the act many times to give vaccine manufacturers priority access to suppliers of raw ingredients and equipment.

In a plan released on Thursday, the Biden administration indicated it would continue to use the act to boost supplies needed for vaccine manufacturing, as well as other materials that are required to immunize tens of millions of people. Although the plan provided few details, one example cited is increasing production of a special syringe that can squeeze six doses out of Pfizer vials that were originally intended to contain five.

I don’t want to make light of the effort to produce more special syringes. If that results in an effective increase in vaccine doses of 20% that’s a worthwhile project. But the DPA isn’t going to result in a big increase in the actual amount of vaccine being made, at least not anytime soon.

It’s important to put this in context of the timeline. The current estimate is that we could be approaching herd immunity by the end of the summer, about six months from now. Dr. Fauci said the same thing on Fox News this morning. At that point, increasing the production of the vaccine may help a lot of people around the world but it will only be of marginal help here at home. So if the DPA can’t create and significant increase in production in the six months, it’s impact is probably limited in the U.S.

Also keep in mind too that the two companies whose vaccines have been approved by the FDA have already been increasing their production targets for 2021. Earlier this month Moderna increased its target by 20%. On Jan. 11, Pfizer increased it’s output target by 50%. Obviously both of those increases happened before Biden took office. The point is that the companies involved are already pushing hard for more vaccine. Invoking the DPA may have some significance down the line but it’s unlikely to make much difference until we are well on the way to herd immunity.