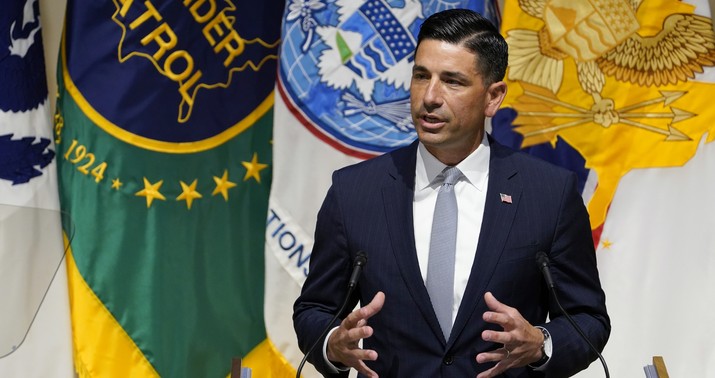 “I am saddened to take this step, as it was my intention to serve the Department until the end of this Administration,” Wolf wrote, citing ongoing litigation challenging the validity of his appointment.

“Unfortunately, this action is warranted by recent events, including the ongoing and meritless court rulings regarding the validity of my authority as Acting Secretary. These events and concerns increasingly serve to divert attention and resources away from the important work of the Department in this critical time of a transition of power,” Wolf added.

There’s no mention of the riot at the Capitol in this announcement but that seems to be the moment when things changed for Wolf. Last Wednesday, Wolf tweeted that those responsible should be held accountable.

Violence in any form is unacceptable. NO one has the right to attack ANY federal institution regardless of motivation. Violent opportunists at the US Capitol grounds must be held accountable. We have a proud history of resolving our differences through peaceful means.

Then on Thursday, a day after the riot, Wolf issued a press release directly calling on President Trump to condemn the violence by his own supporters and specifically warning about elected officials “inciting violence.”

What transpired yesterday was tragic and sickening. While I have consistently condemned political violence on both sides of the aisle, specifically violence directed at law enforcement, we now see some supporters of the President using violence as a means to achieve political ends. This is unacceptable. These violent actions are unconscionable, and I implore the President and all elected officials to strongly condemn the violence that took place yesterday.

DHS takes the safety and security of all Americans very seriously—it’s at the core of our mission to defend our homeland. Any appearance of inciting violence by an elected official goes against who we are as Americans. Every American is guaranteed the right to peacefully protest, but once those protests become violent, we should enforce our laws and bring those responsible to justice—regardless of political motivations. After a challenging and saddening 2020, it’s time for every American to respect each other and the rule of law in 2021.

That statement apparently didn’t go over well at the White House. Less than three hours later, Trump withdrew his nomination of Wolf to formally head the department. The White House denied the change was connected to Wolf’s press release statement:

“The withdrawal occurred yesterday and was not related at all to Wednesday’s events or the Acting Secretary’s comments this morning,” White House spokesman Judd Deere said. “Acting Secretary Wolf remains the acting secretary and continues to perform the duties of his office.”

The resignation is somewhat surprising because Wolf was considered a Trump loyalists just a few months ago. Earlier this year he defended the use of federal police to protect the federal courthouse in Portland from nightly rioters. That was an unpopular stance at the time and must have earned him some goodwill with the president.

So is there any deeper story to this resignation? I’ve already seen one Democrat speculating that maybe this happened now because Wolf was being pressured to do something he wasn’t willing to do. If so we’ll probably hear more about it soon. But for now it looks like Wolf was given a hint last week that the White House didn’t appreciate his direct criticism of Trump supporters and indirect criticism of the president and he decided he’d had enough.