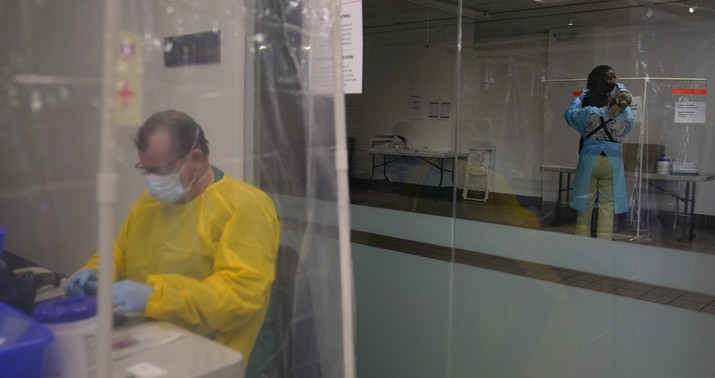 We’ve seen this coming for the past month and now it’s here. California just set a record for the number of COVID deaths reported over a 2-day period.

The state Department of Public Health’s website listed 583 new deaths, a day after 459 deaths. The previous two-day record total was 1,013 deaths at the end of December.

The total number of deaths in the state has reached 28,045. The worst of it is still happening in southern California, especially LA County. Hospitals haven’t started triaging patients yet but we’re on the verge of that now as the county is being overwhelmed with patients:

More than 8,000 people are hospitalized with COVID-19 — with a fifth of them in intensive care — and more than a third of adult hospital beds are occupied by virus patients, said Barbara Ferrer, the county public health director.

“This is a health crisis of epic proportions,” Ferrer said.

While hospitals aren’t rationing care quite yet, ambulances have already been told not to bring in patients in cardiac arrest who can’t be revived in the field:

Now, ambulance crews in LA County have been told not to take patients with little chance of survival to hospitals.

“This order that was issued by the county emergency medical services really is very specific to patients who suffered from a cardiac arrest and are unable to be revived in the field,” said Dr. Jeffrey Smith, chief operating officer of Cedars-Sinai Medical Center.

“Those patients have a very low rate of survival each if they are transported to the hospital. So at this time, it is deemed to likely be futile.”

So if you don’t stand a good chance of survival you probably won’t make it to the hospital anyway. Ambulance crews have also been told to conserve oxygen and only give it to patients with blood saturation levels below 90 percent.

If you do make it to the hospital in an ambulance, you may face a wait of several hours to get in, sometimes up to several hours. This report from CBS LA was published Monday:

The expectation is that the surge of patients southern California is seeing now will continue for at least several more weeks. Meanwhile, the state is vowing to get another million people vaccinated in the next 10 days after getting off to a slow start:

California plans to administer COVID-19 vaccines to 1 million more people in the state over the next 10 days by working with its partners, the acting state health officer at the California Department of Public Health said on Wednesday.

“I think we are clearly recognizing that we need to accelerate our administration of vaccines in California and nationwide,” Dr. Erica Pan said…

Gov. Gavin Newsom also acknowledged this week the state’s slow pace in vaccinations after having initially promised to administer 2 million doses by the end of December.

Of course 1 million people is just a drop in the bucket in a state of 40 million but they are starting with the elderly in care facilities and health care workers. So if we get through most of them the death toll might start to drop. But at this moment, the state is still a disaster on the verge of falling into an even worse crisis.

Amazon congratulates Biden, offers to help with vaccine distribution (and people have thoughts)