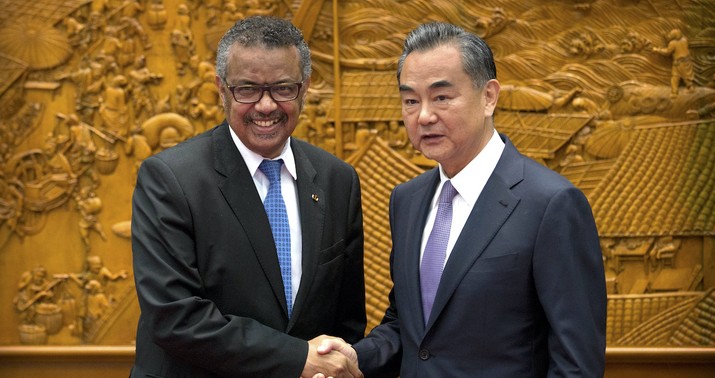 World Health Organization Director Tedros Ghebreyesus has expressed his disappointment that, at the last possible moment, China is once again delaying the start of a long planned investigation into the origin of the coronavirus within China.

“Today, we learned that Chinese officials have not yet finalized the necessary permissions for the team’s arrival in China,” Tedros said during a news conference in Geneva.

“I’m very disappointed with this news, given that two members had already begun their journeys and others were not able to travel at the last minute, but had been in contact with senior Chinese officials,” he said…

Dr. Michael Ryan, the WHO’s emergencies chief, said the deployment had been expected to start Tuesday, but that the needed approvals had not yet been granted, including for visa clearances.

That’s about as ferocious a response as China’s WHO lapdog has ever dared to make toward the CCP. As Axios pointed out, the most surprising thing about this is that Tedros even bothered to speak up after an entire year of delay. Why now when he has spent the past year defending and praising China?

And why is China bothering to delay this investigation when members of the investigation team seem to have already determined that no definitive outcome is likely:

Even before new evidence emerged last week of the scale of Beijing’s concealment and cover-ups, some critics were predicting that the Chinese-approved WHO mission would be a whitewash. They have focused on the prominent role on the team of Peter Daszak, a British zoologist who heads the US-based EcoHealth Alliance, a global health research charity…

The British scientist has forcefully dismissed the scenario of a laboratory leak as “baloney” and a “conspiracy theory”, and praised the work of his Chinese counterparts, notably Shi Zhengli, the “bat woman” of Wuhan, who traced the origins of the earlier Sars coronavirus outbreak to a colony of horseshoe bats in Yunnan.

Richard Ebright, an American scientist and biosafety expert, said Daszak should be “disqualified” because of his ties to the WIV and his strong opinions on the lab mishap theory. “His inclusion makes it clear the WHO study cannot be considered a credible investigation and must be understood instead to be a crude whitewash,” Ebright said…

Dominic Dwyer, an Australian virologist on the team, said members had been told that no sites, including the laboratory, would be off-limits…

Dwyer echoed comments by other team members that they do not intend to assign blame — language that has raised concerns about the goals of the mission.

Even as this crew of tepid investigators gears up for what will certainly be a heavily guided tour of Wuhan, Chinese officials are still pushing the idea that maybe this started somewhere else:

On Saturday, senior diplomat Wang Yi praised the anti-pandemic efforts, saying China not only curbed domestic infections, but also “took the lead in building a global anti-epidemic defence” by providing aid to more than 150 countries.

But mindful of the criticism China has faced worldwide, Wang also became the highest-ranking official to question the consensus about COVID-19’s origins, saying “more and more studies” show that it emerged in multiple regions…

An Italian study showed that COVID-19 might have been in Europe several months before China’s first official case. Chinese state media used the paper to support theories that COVID-19 originated overseas and entered China via contaminated frozen food or foreign athletes competing at the World Military Games in Wuhan in October 2019.

They are also still clamping down on all research into the question at hand: How did this start?

More than a year since the first known person was infected with the coronavirus, an AP investigation shows the Chinese government is strictly controlling all research into its origins, clamping down on some while actively promoting fringe theories that it could have come from outside China.

The government is handing out hundreds of thousands of dollars in grants to scientists researching the virus’ origins in southern China and affiliated with the military, the AP has found. But it is monitoring their findings and mandating that the publication of any data or research must be approved by a new task force managed by China’s cabinet, under direct orders from President Xi Jinping, according to internal documents obtained by the AP. A rare leak from within the government, the dozens of pages of unpublished documents confirm what many have long suspected: The clampdown comes from the top…

“They only select people they can trust, those that they can control,” said a public health expert who works regularly with the China CDC, declining to be identified out of fear of retribution. “Military teams and others are working hard on this, but whether it gets published all depends on the outcome.”

Here’s what China wants out of this WHO investigation: A vague statement that the exact origin is unknown. That will give the CCP the leeway to a) continue to dodge any responsibility for the outbreak and b) claim they’ve been open and transparent. Meanwhile, state media will continue to insinuate that this came from somewhere else, maybe Italy, maybe the U.S. or maybe India. It could be anywhere, except China of course.

China’s last minute bureaucratic delay is just another reminder to the investigators who is really in charge. Maybe one day we’ll find out what actually happened but it won’t be any time soon and it won’t be as a result of this investigation by the WHO.

Disturbing: Nobel laureate Paul Krugman thought it was 'not exactly appropriate' for the band to play this song at Joe Biden's inauguration

Will the market solve the social-media monopoly conundrum?