Appeals Court rules Harvard does not discriminate in admissions, Supreme Court could be next 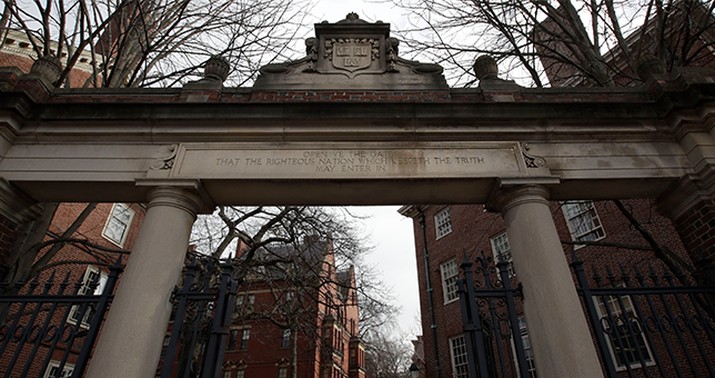 A little more than a year ago a federal court judge ruled there was, “no persuasive documentary evidence of any racial animus or conscious prejudice against Asian Americans” when it came to admissions. That result was appealed and today the First Circuit Court of Appeals once again sided with Harvard:

Two judges from the First Circuit Court of Appeals ruled that the district court was correct in ruling that Harvard’s limited use of race in its admissions process in order to achieve diversity “is consistent with the requirements of Supreme Court precedent.”

“Today’s decision once again finds that Harvard’s admissions policies are consistent with Supreme Court precedent, and lawfully and appropriately pursue Harvard’s efforts to create a diverse campus that promotes learning and encourages mutual respect and understanding in our community,” Harvard spokesperson Rachael Dane said. “As we have said time and time again, now is not the time to turn back the clock on diversity and opportunity.”

But the group that brought the lawsuit says this will now be appealed to the Supreme Court:

“Our hope is not lost,” said Edward Blum, president of Students for Fair Admissions, a conservative legal action group representing a number of Asian-American students who brought the case after being rejected by Harvard. “This lawsuit is now on track to go up to the U.S. Supreme Court, where we will ask the justices to end these unfair and unconstitutional race-based admissions policies at Harvard and all colleges and universities.”

The case is among several attacking affirmative action that are expected to go forward in the courts even after the Trump administration, which has backed efforts to end race-based admissions policies, leaves office. They include litigation brought by Mr. Blum’s group against the University of North Carolina and the University of Texas.

Given the court’s conservative bent it seems possible they could choose to take this up but the NY Times quotes a law professor who says the 100+ page Appeals Court decision seems to have been written with that possibility in mind:

Derek W. Black, a constitutional law professor at the University of South Carolina, said it was clear that the appeals court understood that the national ramifications of the case and the likelihood that it will end up before the Supreme Court.

“In an extremely methodical and careful decision,” he said, the court had “cut through all the rhetoric of those attacking Harvard’s affirmative action plan to find that there is no there there. Harvard, in short, has run its admissions by the book.”

If you want to peruse the lengthy opinion yourself it’s here. I read through most of it and my understanding as a non-attorney is that under current law Harvard can have a race conscious admissions process so long as the consideration of race is not “mechanical” (meaning you automatically get points for being a minority) and so long as there is no “workable” race-neutral alternative admissions process which would achieve the same admissions goals, including greater diversity.

In Harvard’s case, the court found that race-neutral alternative Harvard had considered resulted in fewer white and black students but also other impacts including lower test scores. The Appeals Court concludes Harvard’s existing policy is essentially the best workable alternative which gives “tips” to minority applicants to increase their chances but still doesn’t guarantee admissions by race. Again, I’m not an attorney and it’s hard to summarize 104 pages into a couple paragraphs.

As for discrimination against Asian students, here’s a bit of the conclusion on that point:

SFFA relies on one aspect of the statistical analysis presented. SFFA’s preferred model without the personal rating shows a statistically significant overall average marginal effect of -0.34%. This means that, on average, the model shows that an Asian American student has a .34% lower chance of admission to Harvard than a similarly situated white student and that this effect is statistically significantly different from zero. But because the average marginal effect is calculated using all applicants to Harvard, including many applicants whom Harvard is unlikely to admit, this number does not establish that being Asian
American matters for the small subset of applicants who have a realistic chance of being admitted to Harvard.

We may eventually see if the Supreme Court agrees with the Appeals Court’s conclusions.

BREAKING: The Durham Probe Is Now a Special Counsel Investigation