China awaits election results and hopes for a Biden win 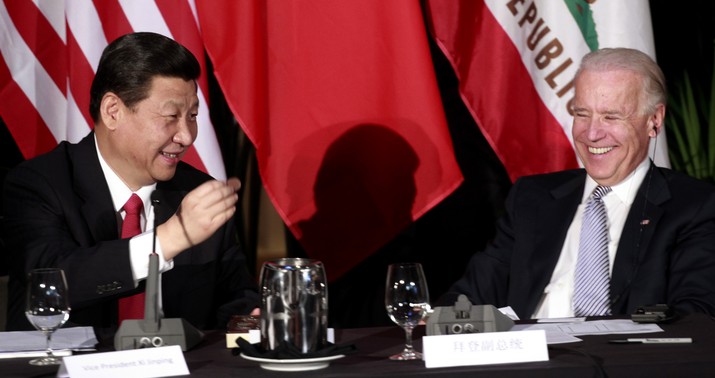 NPR published a story Monday about how China is viewing the U.S. election this year. The story leads with the idea that Trump has been good for China:

Trump being good for China has been, perhaps surprisingly, a common refrain among Chinese policymakers, who see the U.S. president as accelerating America’s decline while aiding China’s rise.

“Another four years of Trump would further divide the U.S. This is beneficial to Beijing,” says Deng Yuwen, a Chinese political commentator.

But halfway through the story we get back to reality: The CCP would prefer a Biden win.

Still, nearly four years of Trump and a coronavirus pandemic that he blames on China have left Beijing anxious about a second term.

Trump’s gone from calling leader Xi Jinping a “friend” to putting sanctions on senior Communist Party officials and the country’s biggest technology firms. His administration has expelled Chinese journalists, made it harder for Chinese students to stay in the U.S. and even closed the Chinese Consulate in Houston.

“I think the decision-makers in Beijing don’t like the Trump administration that much because of this unpredictability; you never know what it’s going to do next,” says Zou Yue, an anchor for China’s state broadcaster…

“I think the agreement here in China is that America is going to be more critical of China and the policies will be more aggressive,” Zou says. “It’s just to what degree.”

In other words, Biden won’t be as tough on China as Trump. One group of people well aware of that are Hong Kong pro-democracy activists many of whom are solidly behind President Trump:

Biden is not the favourite among Hong Kong protesters and some prominent opposition figures who prefer US President Donald Trump to win a second term, believing he will be tougher on China…

In recent months, his administration has sanctioned senior Hong Kong and mainland Chinese officials, revoked Hong Kong’s special status for diplomacy and trade, and signed US acts to back anti-government protesters or sanction individuals deemed to have eroded the city’s autonomy, triggering retaliation from China.

Trump’s tough stance stirred prominent pro-democracy figures in Hong Kong, with media mogul Jimmy Lai Chee-ying making a direct plea to him in a CNN interview in May, saying: “Mr President, you’re the only one who can save us.”…

Although Biden has pledged repeatedly that as president, he will work to curb China’s influence in trade and technology, some pro-democracy supporters in Hong Kong are not convinced.

It’s not just Hong Kong. People in Taiwan also think Trump is more likely to be tough on China:

“Donald Trump’s attitude is good for us and it’s good to have such an ally. It gives us more confidence in terms of foreign affairs – militarily and trade,” Victor Lin, who works in e-commerce, told the BBC from Taiwan. “We have a big brother we can rely on.”

Mr Trump has certainly extended his outreach toward Taiwan. Over the past few months, the two governments have made major steps towards finalizing a bilateral trade deal.

Yesterday, National Review published a piece looking back at the Obama-Biden administrations weak approach to China, especially in the South China Sea:

China started land-reclamation efforts in the South China Sea in 2013. Beijing initially proceeded slowly and cautiously while evaluating the Obama-Biden administration’s reaction. It sent a dredger to Johnson South Reef in the Spratly archipelago. The dredger was so powerful that it was able to create eleven hectares of a new island in less than four months with the protection of a Chinese warship.

When it became clear that the Obama-Biden administration wouldn’t do anything serious to push back, China ramped up its island-building activities. China insisted that its land-reclamation efforts were for peaceful purposes, such as fishing and energy exploration. However, satellite images show there are runways, ports, aircraft hangars, radar and sensor equipment, and military buildings on these manmade islands…

The Obama-Biden administration bore the prime responsibility for not forcefully stopping China’s South China Sea expansion early on. The administration’s soft approach and wishful thinking gave China a four-year strategic window to turn the South China Sea into China’s backyard pond and the most dangerous water on this planet, a reality the rest of the world now has to live with.

If Biden wins the election, the next test of American resolve could come in the form of an invasion of Taiwan. Is Biden ready for that? The Chinese don’t seem to think so. Right now they are hoping a Biden win will make China great again.