Maxine Waters on black men voting for Trump: ‘I will never forgive them’ 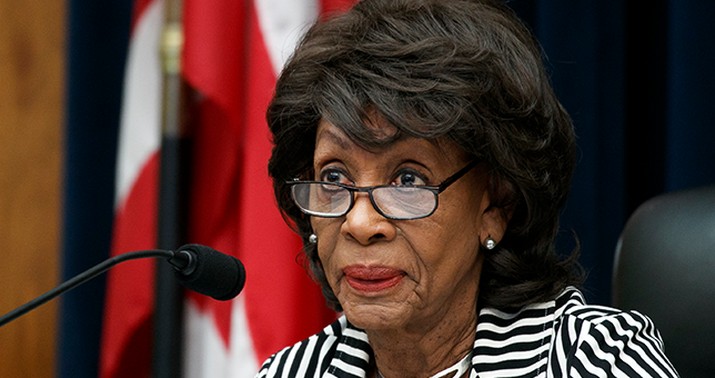 In an interview Monday on Sirius XM, Rep. Maxine Waters made clear she was very upset with the possibility that President Trump could do better among black voters in 2020 than he did in 2016:

“I don’t even know where any Blacks would be coming from that would be voting for Trump. It just hurts me so bad to see Blacks talking about supporting Trump,” Waters said in a Friday interview with SiriusXM’s Joe Madison.

While Black Republican voters have always been around, Black voters, especially Black men, appear to be stepping closer to conservative principles. The stamp of approval from some famous, wealthy rappers, such as Ice Cube, Lil Wayne and 50 Cent, has pushed talk of Black conservatism and Black class priorities back into the national conversation…

Trump has engaged in nothing but divisiveness and racial dog-whistling to the right wing and to white supremacists who feel emboldened by his rhetoric, according to Waters…

“I will never ever forgive them for undermining the possibility to help their own people and their own communities,” she said of young Black men choosing Trump. “It is absolutely unconscionable. It is shameful.”

The Post cites a recent Fox News story showing Trump with 14% of the black vote:

There is some evidence that Black voters have started to swing towards the president, but they still overwhelmingly support Joe Biden. According to the latest Fox News poll, 80% of Black Americans support the Biden-Harris ticket, while 14% back Trump and Pence.

The idea that Trump is gaining ground with minority voters isn’t limited to Fox News. Two weeks ago FiveThirtyEight published a story titled “Trump Is Losing Ground With White Voters But Gaining Among Black And Hispanic Americans” which looked at recent UCLA polling:

While older Black voters look as if they’ll vote for Biden by margins similar to Clinton’s in 2016, Trump’s support among young Black voters (18 to 44) has jumped from around 10 percent in 2016 to 21 percent in UCLA Nationscape’s polling. Black voters remain an overwhelmingly Democratic-leaning constituency, but a notable reduction in their support could still be a problem for Biden…

It’s a similar story with younger Hispanic Americans, a group where Trump has also made gains. According to UCLA Nationscape’s polling, Trump is attracting 35 percent of Hispanic voters under age 45, up from the 22 percent who backed him four years ago in the CCES data.

What the FiveThirtyEight story doesn’t explain in much detail and what Maxine Waters seems to be struggling with is why? Why would minority voters gravitate toward a president who has been deemed racist by many in the media? A possible explanation comes from Musa al-Gharbi, a sociology professor at Columbia University [emphasis added].

Perceptions of Trump as racist seem to be a core driving force pushing whites toward the Democrats. Why would the opposite pattern be holding among minority voters — i.e. the very people the president is purportedly being racist against?

It may be that many minority voters simply do not view some of his controversial comments and policies as racist. Too often, scholars try to test whether something is racist by looking exclusively at whether the rhetoric or proposals they disagree with resonate with whites. They frequently don’t even bother to test whether they might appeal to minorities, as well.

Yet when they do, the results tend to be surprising. For instance, one recent study presented white, Black and Hispanic voters with messages the researchers considered to be racial “dog whistles,” or coded language that signals commitment to white supremacy. It turned out that the messages resonated just as strongly with Blacks as they did with whites. Hispanics responded even more warmly to the rhetoric about crime and immigration than other racial groups.

That is, on balance, these “racist” messages seemed to resonate more strongly with minorities than whites! Across racial groups, most did not find the messages to be racist or offensive— despite researchers viewing these examples as clear-cut cases of racial dog whistles.

Here’s an excerpt from the NY Times piece about the recent research by progressive hoping to advise Joe Biden how to win:

With the help of two liberal pollsters, Joshua Ulibarri and Celinda Lake, we conducted 15 focus groups with members of various Hispanic communities across the country and ran a national survey…

The results are sobering. We began by asking eligible voters how “convincing” they found a dog-whistle message lifted from Republican talking points. Among other elements, the message condemned “illegal immigration from places overrun with drugs and criminal gangs” and called for “fully funding the police, so our communities are not threatened by people who refuse to follow our laws.”

Almost three out of five white respondents judged the message convincing. More surprising, exactly the same percentage of African-Americans agreed, as did an even higher percentage of Latinos.

And just as surprising, the research found Hispanics don’t really see themselves as “people of color.”

Progressives commonly categorize Latinos as people of color, no doubt partly because progressive Latinos see the group that way and encourage others to do so as well. Certainly, we both once took that perspective for granted. Yet in our survey, only one in four Hispanics saw the group as people of color.

In contrast, the majority rejected this designation. They preferred to see Hispanics as a group integrating into the American mainstream, one not overly bound by racial constraints but instead able to get ahead through hard work.

Obviously this is all bad news for Democrats and the rest of the NY Times piece is about how Joe Biden and Democrats can overcome this problem of people not being racially hypersensitive.

None of this means that Trump is going to win the election tomorrow (or whenever we can declare a winner) but it probably does mean that if he does he’ll have black and Hispanic voters to thank for the win. If that happens, you can count on progressive heads to explode and also that Maxine Waters will never forgive them.