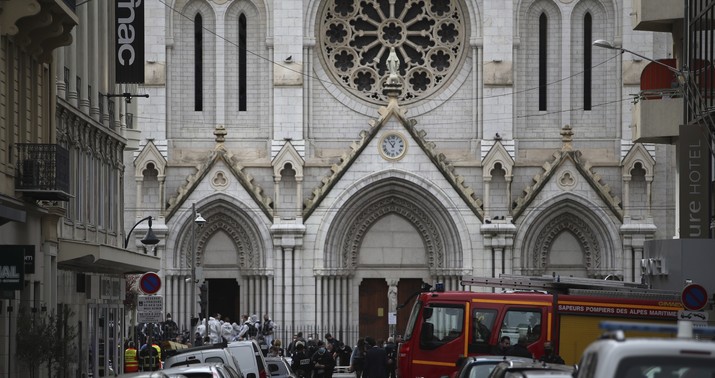 The attacker walked into a church with a knife and killed three people before police could stop him. He repeatedly shouted “Allahu Akbar” during the attack:

The attack in Nice occurred near the Basilica of Notre-Dame de L’Assomption, shortly after 9 a.m. Nice Mayor Christian Estrosi said three people were confirmed dead, and that the attacker repeatedly shouted “Allahu Akbhar,” or “God is greatest” in Arabic…

According to Estrosi and to French media reports citing police sources, one of the three victims, a woman, had her throat slashed inside the church. The second victim, a man, was stabbed to death. The third known victim, another woman, was killed in a bar in front of the basilica where she had hidden.

No one has spoken to the attacker yet. It’s not even certain he’s going to live, so it hasn’t been formally confirmed what motivated him but the Mayor of Nice said he had no doubt this was terrorism. He compared the death of one of the victims to that of Samuel Paty, a teacher who was beheaded in Paris less than two weeks ago:

The mayor of Nice, Christian Estrosi, told reporters on Thursday that a suspect, who has not been identified, was arrested after being shot and wounded by the police. The suspect “kept repeating Allahu akbar in front of us even though he was sedated,” Mr. Estrosi said, adding this left “no doubt” about the motivation behind the attack.

“There is a woman who quite clearly was attacked with the same modus operandi as Samuel Paty,” the Nice mayor, Mr. Estrosi, told BFM TV, referring to the teacher who was killed, suggesting that the victim was also decapitated…

“Enough is enough,” said Mr. Estrosi, the Nice mayor. “It is now time for France to exempt itself of peacetime laws to permanently annihilate Islamo-facism from our territory.”

There were several other attacks around France this morning. First in the city of Avignon where a man with a gun was killed after making threats and refusing to drop the weapon:

The man was shot dead in Montfavet, a district in the city of Avignon, on Thursday, police said.

He was killed after he refused to drop his weapon and a flash-ball shot failed to stop him, one police official said.

The man had shouted “Allahu akbar”, according to French radio station Europe 1.

There was another involving a man with a 12″ knife in the city of Lyon:

A man armed with a long knife was arrested in the southeastern French city of Lyon on Thursday as he was about to board a tram, a a source close to the inquiry told AFP.

The suspect, an Afghan national in his 20s who was dressed in traditional Afghan clothes, had already been flagged to French intelligence services, the source said.

Finally a security guard at a French Consulate in Saudi Arabia was attacked by a man with a knife. His wounds were not life threatening.

All of this happened in the midst of a backlash against France for its response to the beheading of a teacher in Paris. Multiple Muslim countries have started boycotts of French goods. An anti-France protest in Bangladesh earlier this week attracted tens of thousands of people who burned French flags.

Within France, some recent polls indicate a majority of the public feel they, and their values, are under attack by radical Islam. There have been three dozen serious terror attacks in France since 2012, including the 2015 attack on the Charlie Hebdo offices, then later the same year a series of attacks killed 130 people in Paris. In 2016 an attack in Nice using a heavy truck as a weapon killed 86.

Today, President Macron gave a speech in Nice saying, “”if we are attacked, it is because of our values, our values of freedom and our desires not to yield to terrorism.” He added that the number of soldiers mobilized on French soil would be doubled to 7,000.

Two clips to close this out. The first includes a bit of the statement by the Mayor of Nice about the attack. It has been subtitled in English. Below that is an AFP clip from this morning which puts what happened into context.