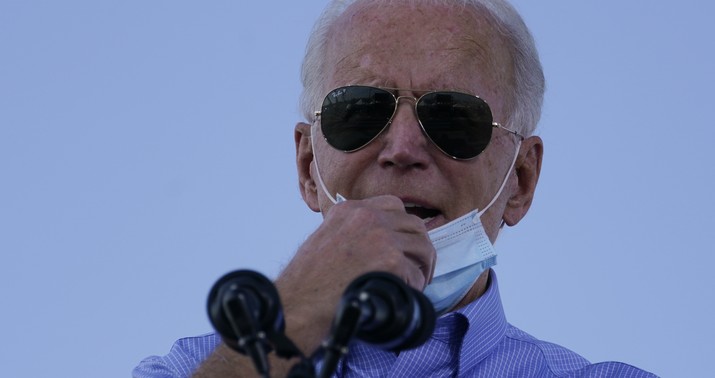 Biden’s campaign strategy continues to look like an attempt to run out the clock while polls show he has a lead. But some Democrats continue to worry that Biden is taking a big risk by not being aggressive in the final days of the campaign. Today the NY Times points out that in any normal election year what Biden is doing would be considered a very lax approach:

On the Friday before Election Day, Joseph R. Biden Jr. will be in the Midwest, campaigning in both Iowa and Wisconsin as he presses his closing argument.

In any other year, and for any other campaign, that would be a normal — even gentle — day of travel in the homestretch of a bitterly fought, high-stakes presidential race. But compared with many of Mr. Biden’s days this month, and even a few this week, it’s the equivalent of a barnstorm.

On Sunday, Mr. Biden held no in-person campaign events, straying from his home in the Wilmington area only for church. On Monday, he ventured out just briefly to greet supporters across the state line in Pennsylvania. On Wednesday, six days before Election Day, he was back in Delaware, hardly a battleground state, giving remarks on health care and voting himself. In between, he traveled to Georgia, putting pressure on President Trump in a closely contested state, and he is slated to campaign in Florida Thursday headed into an intense final weekend…

He has rarely ventured west of Michigan, he almost never remains overnight on the trail and he often makes just one or two stops when he does travel. He has embraced drive-in car rallies, but many of his other events are still small and socially distanced.

Some Democrats in battleground states where polls show the race is tighter continue to worry that Biden is making a mistake:

In recent days, even as cases have risen in Wisconsin, a number of Democrats there pressed the Biden campaign to plan another visit, said Mayor Tom Barrett of Milwaukee…

A couple of Democrats interviewed by the Times admitted there was another concern about Biden himself, i.e. a reason not to have him spend more time on the trail in the closing weeks. “It would be a hell of a thing if, having been as careful as they’ve been, as responsible as they’ve been, if in the last week they allow Biden to get sick,” David Axelrod said. And the chairman of the Texas Democratic Party said something similar, “this is too, too near the end for him to jeopardize where he’s at by getting sick.”

The Democratic spin is that Biden is being consistent with his own message, i.e. taking the coronavirus seriously and not putting anyone at risk by holding rallies. That’s one possible explanation. Another is that Biden doesn’t have the stamina to campaign and COVID is providing an excuse for never getting Biden out of 2nd gear.

A third possibility is that his camp really is far more concerned about what could happen if he gets sick than they are saying.

We saw just this week how far the media is willing to go to protect Biden from the claim he’s lost a step. But if he does lose the election I wouldn’t be surprised if part of the recriminations were admissions from insiders that his condition just didn’t allow for them to do more.

On the other hand, if Biden wins the election he’ll have 2 1/2 months of transition in which he remain somewhat on the sidelines but once inaugurated his ability to call a 9 am lid several days out of the week would end once and for all. And then we’ll all find out together how much stamina Biden really has left. One way or another he’s going to surprise a lot of people.