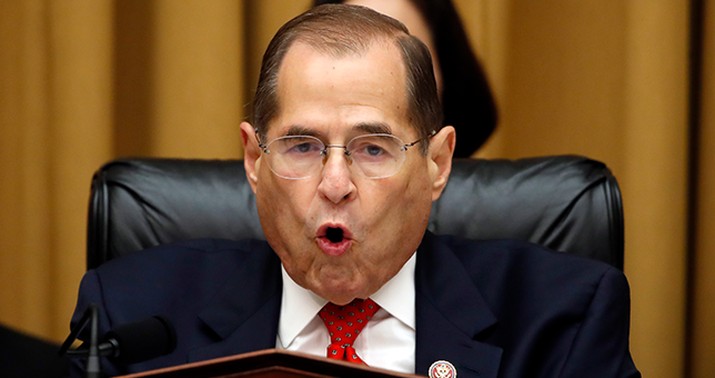 The Supreme Court has refused to take up an emoluments case filed by Democrats back in 2017. That means the lower court ruling that Democrats do not have standing to bring the case will stand. This little corner of the resistance is dead:

The Supreme Court on Tuesday put an end to a lawsuit brought by congressional Democrats that accused President Donald Trump of violating anti-corruption provisions in the U.S. Constitution with his business dealings.

In the case brought by congressional Democrats, the U.S. Court of Appeals for the District of Columbia Circuit in February ruled that individual members of Congress have limited ability to litigate questions affecting the legislative branch as a whole.

One more little tidbit worth noting here. Guess which judge was all for letting this case go forward initially:

The congressional case reached the D.C. appeals court after Judge Emmet G. Sullivan cleared the way for lawmakers to issue 37 subpoenas seeking financial information, interviews and other records, including ones related to Trump Tower and his Mar-a-Lago Club in South Florida.

But that request was put on hold after the appeals court stepped in midstream and intervened — at Trump’s request and with Sullivan’s consent — to consider the untested separation-of-powers issues.

If that name sounds familiar it’s because Judge Sullivan is the same judge still refusing to dismiss the case against Michael Flynn.

In order to really appreciate this win, it’s necessary to walk back through the entire history of emoluments clause lawsuits. It began even before Trump was inaugurated when Richard Painter took over a position held by David Brock as Vice-Chairman of the board for a left-leaning group called Citizens for Responsibility and Ethics in Washington (CREW). Painter and board chairman Norm Eisen co-wrote a piece for the Atlantic headlined “Trump Could Be in Violation of the Constitution His First Day in Office.”

In January 2017, days after Trump’s inauguration, CREW announced plans to file a lawsuit along these lines, alleging that, in particular, Trump’s hotel put him in violation of the emoluments clause forbidding the acceptance of payments from foreign dignitaries. Here’s a bit of what the NY Times reported back then about the people behind the lawsuit. Right away there was a potential problem with the lawsuit:

The plaintiff in the lawsuit is a liberal group known as Citizens for Responsibility and Ethics in Washington, which until recently was controlled by David Brock, a Democratic Party operative and fervent supporter of Hillary Clinton’s campaign…

The lawsuit may run into trouble, other legal experts said, given that CREW, as the organization is known, must demonstrate that it would suffer direct and concrete injury to give it standing to sue.

As predicted, the lawsuit did have a problem with standing, so in April 2017 CREW announced it was expanding the lawsuit:

The revised complaint by Citizens for Responsibility and Ethics in Washington, or CREW, is an effort to address what some saw as a critical weakness in the group’s original lawsuit: the lack of a clear victim who could claim injuries resulting from Mr. Trump’s failure either to sell off his business holdings or to place them in a blind trust.

Then in June 2017, Democrats jumped on the bandwagon announcing they would file their own version of the lawsuit. Their hope was that Congress would be able to establish standing:

“We’ll be suing to stop his violations of the emoluments clause,” senior House Judiciary member Jerry Nadler (D-N.Y.) confirmed in an interview. The lawsuit won’t be filed until next week at the earliest but dozens of Democrats on both sides of the Capitol have already signed on in support, Nadler said…

Sen. Richard Blumenthal (D-Conn.), who is spearheading the emoluments effort in the upper chamber, told POLITICO that “there have been extensive discussions” recently on moving forward with legal action…

“Members of Congress we say have standing because the emoluments clause says without the permission of Congress, you can’t accept any gift, etc., etc., from a foreign state,” Nadler said. “We are injured by being denied our right to vote on this, that’s our standing.”

So here we are nearly 3 1/2 years later and despite the best efforts of Rep. Nadler, Sen. Blumenthal, Judge Sullivan and dozens of other elected Democrats, the Supreme Court just let the air out of this balloon once and for all.

The Democrats’ case is done but there are still two similar lawsuits, one brought by two attorneys general and the CREW lawsuit. That lawsuit was dismissed back in December 2017 but was reinstated in 2019 and is still ongoing. If Trump wins re-election next month, we’ll probably see a surge of renewed interest in the case.