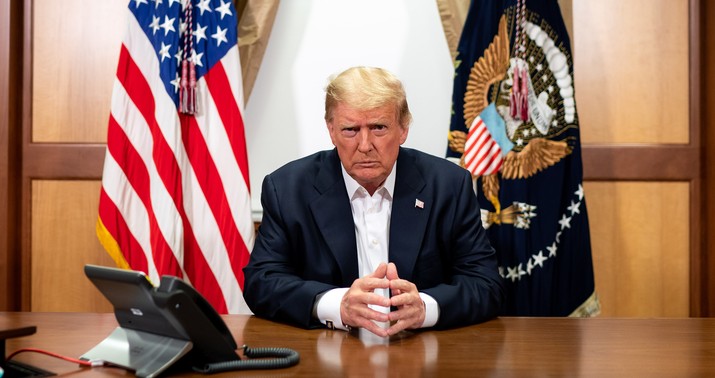 The left has really been losing what’s left of its collective mind over Trump’s COVID diagnosis. Last week I wrote about Michael Moore and many other blue-checked progressives who were spreading the idea that Trump coming down with COVID was possibly a hoax intended to change the subject and reset the campaign. But over the weekend as Trump’s doctors gave updates and several more people connected to the White House tested positive, it seemed the left and the media had moved on to other concerns. Specifically, the new worry was that the severity of Trump’s illness was being covered up and that he was carelessly spreading the virus.

But now that Trump has announced he’s leaving the hospital (more on that shortly from Allahpundit) some on the left seem to have reverted back to the original conspiracy theory, which is why #TrumpCovidHoax is now trending on Twitter:

I think the best part about him not having COVID is that he could still get COVID.#TrumpCovidHoax #TrumpLied200KDied

Let’s just say Trump DID have COVID and this treatment worked.

Like all of us, I want a vaccine and a cure.

His treatment to “beat” it needs to immediately go into effect for every American with COVID.

If not, Im going to assume it’s all a lie.#TrumpCovidHoax? We’ll see.

Hmmm, no one feels better after getting Covid but Trump claims he feels better now than 20 years ago. All he has done is cause #TrumpCovidHoax to become that much more believable

And the next tweet goes right over the line into tinfoil hat territory.

Trump is running out of the hospital today because he got ZERO sympathy bump in the polls. He will need to come up with something better now.#TrumpCovidHoax #TrumpCovid19 #TrumpLied200KDied

Others are content to suggest without quite going all the way (but he still used the hashtag).

COVID-19 is such a mysterious virus I’m not going to say Trump doesn’t have it.

But I am going to say that I workout about five times a week and eat healthy, he doesn’t, but the post COVID syndrome put me in the hospital twice. If that means anything. #TrumpCovidHoax

I’m only grabbing tweets from people with a lot of followers but for every person like this there are dozens of people with a handful of followers saying the same thing. Needless to say the fact that this conspiracy it trending on the left is all the fault of the White House:

oh look, #TrumpCovidHoax is trending. I am shocked, shocked to learn that people don't trust any information that comes out of this White House. Why on earth would that be? https://t.co/GcGxoidSKC

As happened last week when this conspiracy theory popped up, it’s getting some pushback now as well:

The #TrumpCovidHoax theory only works if you believe that Trump:

1) wanted to tank the stock market
2) wanted COVID to be the biggest story of the month
3) wanted to pass up all those rallies
4) is clever.

True it doesn’t make a lot of sense but thinking things through isn’t really where many on the left operate these days, at least not when it comes to Trump. What matters is emoting a lot and always thinking the worst of your enemies even if that’s the opposite of what you were thinking yesterday.

WATCH: Kamala Crashes and Burns When Asked About Having the Most Liberal Senate Record