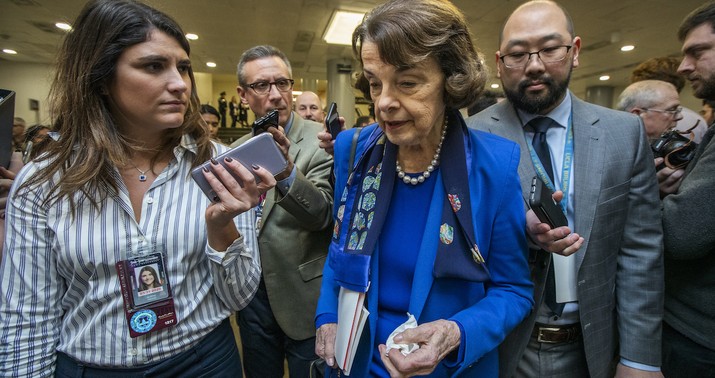 With the replacement for Justice Ginsburg on the line, Democrats are suddenly worried that Sen. Dianne Feinstein isn’t up to the task of managing a Supreme Court confirmation battle. In fact the concern isn’t just that Dems will lose the confirmation battle but that the effort will become such a fiasco under Feinstein’s guidance that they’ll lose any chance to retake the Senate.

Feinstein, the oldest member of the Senate, is widely respected by senators in both parties, but she has noticeably slowed in recent years. Interviews with more than a dozen Democratic senators and aides show widespread concern over whether the California Democrat is capable of leading the aggressive effort Democrats need against whoever President Donald Trump picks to replace the late Justice Ruth Bader Ginsburg.

The Judiciary Committee is the critical battleground in the Supreme Court confirmation process. At stake, her own Democratic colleagues worry, is more than just whether the party can thwart Senate Majority Leader Mitch McConnell (R-Ky.) in his rush to fill the seat. Some Democrats privately fear that Feinstein could mishandle the situation and hurt their chances of winning back the majority.

Feinstein sometimes gets confused by reporters’ questions, or will offer different answers to the same question depending on where or when she’s asked. Her appearance is frail. And Feinstein’s genteel demeanor, which seems like it belongs to a bygone Senate era, can lead to trouble with an increasingly hard-line Democratic base uninterested in collegiality or bipartisan platitudes.

While no one making this criticism is named in the story, one person quoted is identified as a Democratic Senator. This Senator says a “group” of Senate Democrats want Feinstein to step aside in favor of a male Senator.

A Democratic senator, speaking on the condition of anonymity, said a group of Feinstein’s colleagues want Sen. Dick Durbin (D-Ill.) or Sheldon Whitehouse (D-R.I.) to serve as the top Democrat on the Judiciary panel for the upcoming nomination hearings, which are expected to be extraordinarily contentious. This senator is worried that potential missteps by Feinstein could cost Democrats seats.

“She’s not sure what she’s doing,” the Democratic senator said of Feinstein. “If you take a look at Kavanaugh, we may be short two senators because of that. And if this gets [messed] up, it may be the same result.”

“I think it could impact a number of seats we can win,” the senator added…

A third Democratic senator put it this way: “She can’t pull this off.”

Feinstein responded to all of this saying she was “really surprised and taken aback” but she shouldn’t be. The Kavanugh confirmation battle should have demonstrated to her as it did to the rest of the country that Democrats will say and do anything to win.

But forget Feinstein for a moment, what about Joe Biden? Reading this story has got to be making the Biden camp deeply uncomfortable. Democratic Senators are doing to Feinstein exactly what Republicans have been doing to Biden. And yes, maybe Feinstein has lost a step at 87-years-old but couldn’t an honest observer say the same about Biden, who is about to turn 78. He also sometimes seems confused by questions. He also is prone to mistakes when speaking. He also seems less energetic than he once was.

The response to accusations that Joe isn’t what he once was has been to accuse Republicans of playing dirty, but by pushing this whisper campaign against Feinstein Democrats are legitimizing the same sort of attack against Biden. At least that’s how it looks to me but I’m sure the media will come up with some excuse why there should be two different sets of standards to judge these nearly identical allegations. Biden will still be off limits even as Democrats move to oust one of their own Senators on the same grounds.

This clip from the Post was published a year ago.