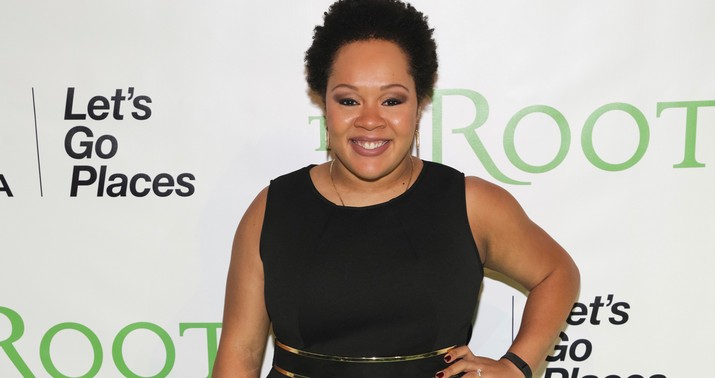 I’ve written before about the blatant bias in PBS’ White House correspondent Yamiche Alcindor’s work. She has become a star on the left for her tweets which often include asides offering “context” or facts she thinks are important to add to whatever she is reporting. But that context always trends in one direction. So, for instance:

Context: Since mid-March, some 39 million Americans have filed for unemployment.

Those tweets clearly seem to have a partisan edge (she knows her audience) but at least the things she’s appending to her coverage are factual. Today she seemed to dispense with facts entirely and simply offer her opinion as part of her “coverage” of President Trump’s criticism of the 1619 Project. Alcindor is apparently a 1619 stan:

An important note that as President Trump gears up to attack the 1619 project, @nhannahjones is a national treasure who put in context how America came to be, the black enslaved people it exploited and the way forward. We should all be grateful for the 1619 Project.

Look, I know Hannah-Jones won a Pulitzer but I don’t think saying she “is a national treasure” is a matter of undisputed fact any more than saying ‘Tucker Carlson is a national treasure.’ No doubt there are many people on both sides who believe those statements but it’s a matter of personal opinion. So why is Alcinor calling this “an important note” as if she’s presenting a fact-check. Why doesn’t she just say, “In my opinion…” and leave it at that?

Also, she must be aware that her claim that 1619 put in context “how America came to be” is widely disputed. The idea of choosing the date 1619 was in part to replace or supercede 1776 as the founding of the country and to do that Hannah Jones alleged that the Revolutionary War was primarily just an effort to protect slavery. That effectively made 1776 just a continuation of the story that started in 1619.

The problem was that it wasn’t true as several professional historians pointed out. In fact, we later learned that Hannah Jones had been warned it wasn’t true prior to publication but went with it anyway. She must have thought no one would call her on it and she was nearly right. Only about half a dozen historians did. There were indications that others knew the claim was wrong but didn’t want to damage the Project’s reputation in public.

In any case, after intially denying the need for a correction, Hannah-Jones and the Times eventually admitted the claim was in error. They have since portrayed this admission as just a minor correction but it actually undoes the main thesis. If 1776 wasn’t a continuation because it wasn’t prmarily about protecting slavery then 1619 isn’t the starting date for America.

But Alcindor wasn’t done offering her opinions as if they were facts:

Trump just announced he will soon be signing an executive order establishing a "national commission to promote patriotic education" called the "1776 Commission."

It is unclear what that means but he has been trashing the 1619 project which aims to educate the nation with facts.

It’s important to remember that 1619 wasn’t written by a historian but by a journalist. It won a Pulitzer not for history but for commentary. So the claim that it’s just presenting the facts is absurd. I don’t think even Nikole Hannah Jones believes that. She has said it’s not about history but memory, i.e. it’s an “attempt to challenge the national narrative.”

Oh, this is a fabulous, thoughtful thread. He is right: The fight over the 1619 Project is not about history. It is about memory. https://t.co/3Ji7SMUFo6

The crazy thing is, the 1619 Project is using history and reporting to make an argument. It never pretended to be a history. We explicitly state our aims and produced a series of essays. Critique was always expected, but the need to discredit it speaks to something else.

Hannah-Jones is of course free to present her challenge to the national narrative. She is writing commentary for a private enterprise, albeit one that has apparently been taken over from the inside by the far left. Alcindor on the other hand is allegedly doing straight reporting for a news site partly funded by taxpayers. I know her fans on the left won’t complain about this tilting of the playing field, they never do when the journalists are tilting in their direction. Still, I wonder if PBS NewsHour has anything to say about it. Is Yamiche Alcindor doing news or opinion at this point? In my view she seems to be doing both without noting there’s a difference.