Trump administration in talks to ‘draw down’ federal police from Oregon 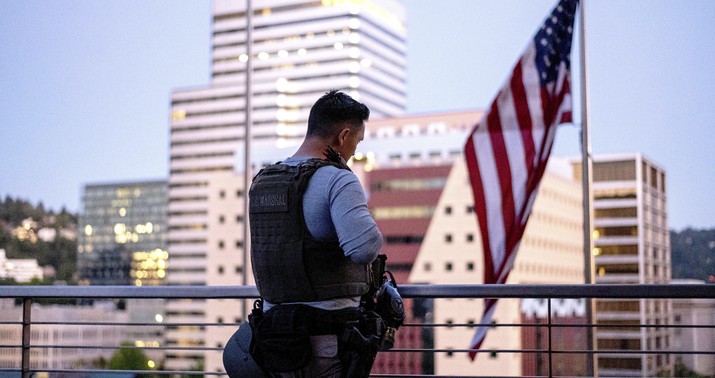 This story was just published and it says there’s no deal in place yet but the administration is discussing the removal of federal police officers from Portland, but there’s a condition:

The Trump administration has started talks with the Oregon governor’s office and indicated that it would begin to draw down the presence of federal agents sent to quell two months of chaotic protests in Portland if the state stepped up its own enforcement, a senior White House official said Tuesday.

The official stressed to The Associated Press that the talks with the office of Democratic Gov. Kate Brown are in the early stages and there is no agreement. The official was not authorized to publicly discuss private conversations and spoke on the condition of anonymity…

Just a day earlier, the U.S. Marshals Service and Department of Homeland Security were weighing whether to send in more agents. The marshals were taking steps to identify up to 100 additional personnel who could go in case they were needed to relieve or supplement the deputy marshals who work in Oregon, spokesman Drew Wade said.

Seattle Mayor Jenny Durkan said Tuesday she had received confirmation that U.S. agents had left the area after being sent to Seattle last week to protect federal buildings amid lingering unrest over the police killing of George Floyd.

Durkan, Gov. Jay Inslee and other local leaders said in a joint news release that the Department of Homeland Security’s Border Patrol Tactical Unit had demobilized…

Durkan called the president’s actions “to target and ‘dominate’ Democratic cities through the use of federal forces” chilling.

“It has increased violence in Portland, Seattle and other cities across the country, which was what the president intended,” the mayor said.

She’s pretty shameless talking about the increase in violence caused by President Trump. She was the person who compared CHAZ/CHOP to a “block party” and let it fester for weeks until five people were shot, two fatally. Nothing the feds did in Seattle comes close to that record of abject incompetence.

But competence isn’t really the game here. All that matters to these people is showing their opposition to Trump. Back in Portland City Commissioner Chloe Eudaly issued a statement on the “federal occupation” today in which she said this:

Last Wednesday, I introduced two resolutions that were passed unanimously by City Council. One to stop the Portland Police Bureau from cooperating with the federal occupiers, and another to affirm the rights of members of the press and legal observers. On Thursday, I directed the Portland Bureau of Transportation (PBOT) to enforce on the federal occupiers for erecting a fence in our public right of way. PBOT filed a cease and desist demand on behalf of the City—we have not received a response. We are assessing the maximum fine of $500 for every 15 minutes the fence obstructs our street, and we are investigating other legal remedies available to us. Typically, we would send a maintenance crew or contractor to remove such an obstruction, but I will not send workers into harm’s way. Yes, I am afraid to direct workers to do their job and enforce our laws against the federal government—I hope that gives everyone reading this pause. As of yesterday, the federal government owes us $192,000 and counting. We intend to collect.

She’s not going to collect but this stunt will certainly make her a resistance hero for a few minutes.

A draw down will be seen as a win for the rioters but at this point I’m sympathetic to the idea that by being there the feds are giving local police an excuse not to act. Maybe it really is best if the feds leave town and then let the mayors in Portland and Seattle make a choice. They can either defend the courthouse from the rioters or they can let them destroy it. Either way they are going to wind up looking bad and will be hated by the same people whose approval they are trying to get. It’s time they took responsibility instead of complaining about the feds while the feds do the heavy lifting.