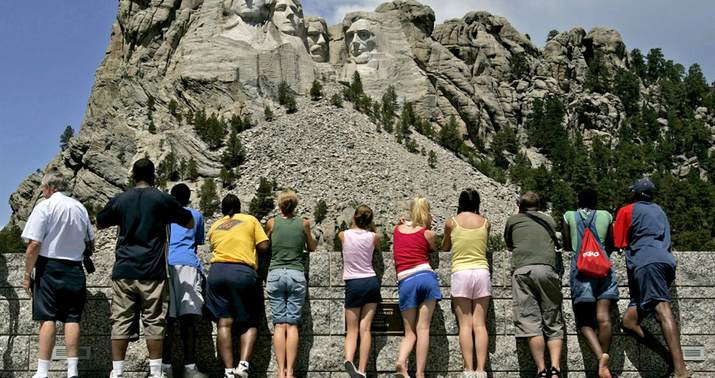 Just yesterday the DNC tweeted a statement about Trump’s planned 4th of July celebration calling it a “rally glorifying white supremacy at Mount Rushmore.” That tweet was deleted pretty quickly but today the NY Times published a piece making the case against Mount Rushmore in more detail:

Native Americans have long criticized the sculpture, in part because it was built on what had been Indigenous land. And more recently, amid a nationwide movement against racism that has toppled statues commemorating Confederate generals and other historical figures, some activists have called for Mount Rushmore to close…

Mount Rushmore is built on land that had belonged to the Lakota tribe. “Wherever you go to connect to God, that’s what the Black Hills are to the Lakota,” said Nick Tilsen, a member of the Oglala Lakota tribe and the president of NDN Collective, an Indigenous activist group.

Prospectors seized the land during a gold rush in the 1870s, violating the Fort Laramie treaty of 1868, which recognized the Black Hills as belonging to Native Americans, Mr. Tilsen said in an interview…

Mr. Tilsen said recent efforts to confront racial injustice in the United States could provide an opportunity to reconsider the monument’s future. “Mount Rushmore needs to be closed as a national monument, and the land itself needs to be returned to the Indigenous people,” he said.

In a statement on Monday, Harold Frazier, the chairman of the Cheyenne River Sioux Tribe, called the monument a “brand on our flesh” that needed to be removed.

Those are some of the Native American objections. The article also cites complaints that the four presidents included in the monument–Washington, Jefferson, Roosevelt and Lincoln– were all racists. And yes, the Times links to this book review from 2017 for a book which attempted to make the case that President Lincoln was racist. [It’s worth noting that the author of the 2017 review didn’t seem terribly impressed with the book and called its views of Lincoln and race over-simplified. The authors of the Mount Rushmore piece don’t mention that.]

South Dakota Gov. Kristi Noem released a statement Monday saying that there have been threats made against the monument. Her statement was titled, “Not on My Watch.”

In recent days, we have seen threats to memorials that honor some of America’s greatest leaders. Some vandals have gone so far as to attack statues of Abraham Lincoln and Ulysses S. Grant, the very leaders who brought the Union through the Civil War and ushered in the end of slavery in our country. These are the same men who turned Jefferson’s ideal into reality. Now we’re seeing threats to Mount Rushmore. To those who would threaten America’s Shrine of Democracy, I have one simple message for you: Not on my watch.

President Trump is visiting Mount Rushmore in just a few days, and it is such an honor to have the President of the United States visit South Dakota, especially to celebrate America’s birthday. Security measures will be in full force for the event, but we know that threats to Mount Rushmore may continue after the President leaves. We’ll stay diligent about protecting it.

I want to make one thing clear: the men honored on Mount Rushmore weren’t perfect; nobody is. They all had flaws. But they all had tremendous virtues as well, and they did incredible things for our country. Today, America is the greatest nation in the history of the world, and that is in no small part thanks to each president memorialized on Mount Rushmore. We can learn from their successes, and we can also learn from their mistakes. And in doing so, we must continue to fight for the American ideal that each of them spent their lives striving for: “All men are created equal.”

Gov. Noem should remain vigilant because the fact that the monument is in the middle of the Black Hills won’t protect it from the new iconoclasts. It may be harder to reach and harder to pull down, but that just makes it a bigger prize. I’d be willing to bet that, out there somewhere, vandals are already drawing up plans to splash it with red paint or damage it in some way. There’s a social justice reward of status and fame for whoever manages to do it.

I don’t have a problem with people who want to petition to remove monuments of, say, confederate historical figures to museums rather than leaving them in public places. People get to choose their own heroes like they get to choose everything else in America. Fair enough. But destroying monuments to American presidents goes well beyond that. Still I can’t help wondering if Rushmore will survive the current national mood.