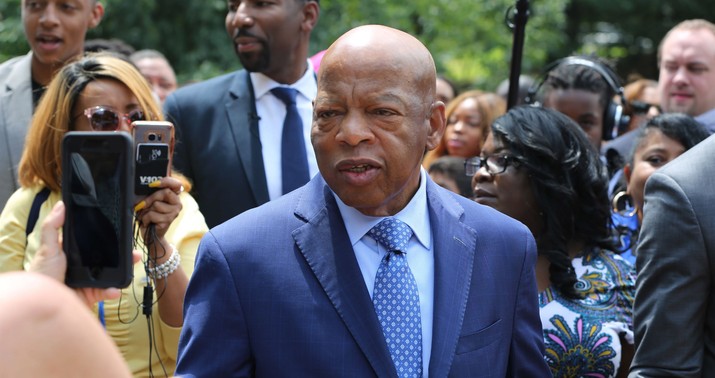 Rep. John Lewis was one of the leaders of the Civil Rights movement in the 1960s. He helped organize the March on Washington with Dr. King. He was beaten by
Alabama police after a peaceful march across the Edmund Pettus bridge. Unfortunately, Lewis is suffering from pancreatic cancer, but in the wake of the death of George Floyd and the subsequent riots, he issued a statement comparing Floyd’s death to that of Emmett Till.

Sixty-five years have passed, and I still remember the face of young Emmett Till.  It was 1955.  I was 15 years old — just a year older than him.  What happened that summer in Money, Mississippi, and the months that followed — the recanted accusation, the sham trial, the dreaded verdict — shocked the country to its core.  And it helped spur a series of non-violent events by everyday people who demanded better from our country.

Despite real progress, I can’t help but think of young Emmett today as I watch video after video after video of unarmed Black Americans being killed, and falsely accused.  My heart breaks for these men and women, their families, and the country that let them down — again.  My fellow Americans, this is a special moment in our history.  Just as people of all faiths and no faiths, and all backgrounds, creeds, and colors banded together decades ago to fight for equality and justice in a peaceful, orderly, non-violent fashion, we must do so again.

To the rioters here in Atlanta and across the country: I see you, and I hear you. I know your pain, your rage, your sense of despair and hopelessness. Justice has, indeed, been denied for far too long. Rioting, looting, and burning is not the way. Organize. Demonstrate. Sit-in. Stand-up. Vote. Be constructive, not destructive. History has proven time and again that non-violent, peaceful protest is the way to achieve the justice and equality that we all deserve.

Our work won’t be easy — nothing worth having ever is — but I strongly believe, as Dr. King once said, that while the arc of the moral universe is long, it bends toward justice.

But despite Lewis’ unassailable record as a champion of civil rights for black Americans, his statement has been rejected by many people who think the time for non-violence is over. The Atlanta Journal-Constitution published a piece about some of the reactions titled, “Reactions mixed after Rep. John Lewis rebukes protest violence.” Most of the reactions they cite come from random people on Twitter with small follower counts. But yesterday the New Yorker published a piece containing a reaction by Alicia Garza the co-founder of Black Lives Matter. Garza says she respects Lewis but she clearly thinks he’s wrong to emphasize non-violence:

Alicia Garza, one of the co-founders of Black Lives Matter Global Network, said that although she deeply respected Lewis, she differed with his emphasis. “It’s a familiar pattern: to call for peace and calm but direct it in the wrong places,” she told me. “Why are we having this conversation about protest and property when a man’s life was extinguished before our eyes?

“I’m not going to spend my time telling people to go home,” Garza continued. “All I can think about right now is, What’s happening with this investigation? Why are three of the four officers still at home with their families while George Floyd’s family is destroyed? Why is there no state of emergency around white nationalists trying to create chaos? We don’t have time to finger-wag at protesters about property. That can be rebuilt. Target will reopen. The stores will reopen. That’s assured. What is not assured is our safety and real justice.”

Let’s look at Garza’s claim in detail. The claim about white nationalists behind the protest was spread widely last week by left-wing outlets. There is some evidence that a handful of these people have shown up at recent protests but the idea that they are motivating most of the violence is not supported by the facts. We know that at least some of the violence has come directly from people who are definitely not white supremacists.

In any case, Garza is pretty clearly rejecting concern over property destruction as if it’s not that significant. But it is significant for the business owners whose livelihoods are destroyed, some of whom don’t have insurance that covers rioting.

“I am protecting my business and they’ve robbed us after being closed for 3 months,” a Boston business owner cries out after watching his shop being smashed and rioters trying to loot it overnight. You can hear the pain in his voice. @alainapinto has more on the cleanup on #7News pic.twitter.com/674Fx7PYuT

RT YoungDems4Trump: So sad. This poor business owner lost everything due to the #MinneapolisRiotpic.twitter.com/1HXqk668o7

There’s another, much bigger problem that Garza overlooks. Riots, by definition, are violent acts. So what happens when the business owners try to get between the looters and the property they own? In some cases it results in violence against the owners:

And in some cases, it’s not the owners who get threatened or beaten up, it’s the would-be looters. This video shows the owner of a cigar shop chasing people out at gunpoint.

There have been lots of incidents during these riots when things spiraled out of control and went beyond destruction of property:

Portland: A man tried to help the man carrying a US flag who was getting beaten on the ground at yesterday’s antifa/BLM riot. They chased him away and kicked him in the face when he was unconscious on the ground: #Antifa #BlackLivesMatter pic.twitter.com/xqKTYT5tPl

There’s a lot more like this out there. People are getting hurt and even killed during the rioting. So shrugging off riots as if property destruction is no big deal overlooks the fact that once the destruction starts lots of people get hurt or even killed. We’ve already had several deaths of protesters directly connected to the rioting.

And yet, the idea that riots create progress seems to be increasingly popular on the left. Even the Democratic Party of Fairfax, Va was making this case over the weekend.

And Mayor Ted Wheeler of Portland is also excusing riots as a path to change.

We talked about agitation – yes even violent agitation and how it has historically occurred with purpose and resulted in change that has moved this country forward.

The bottom line is that the non-violent Civil Rights movement of the 1960s is considered out-of-fashion by many on the left today. There is a growing consensus that rioting either doesn’t matter (it’s just property and it’s insured) or might even be a beneficial path to social justice.