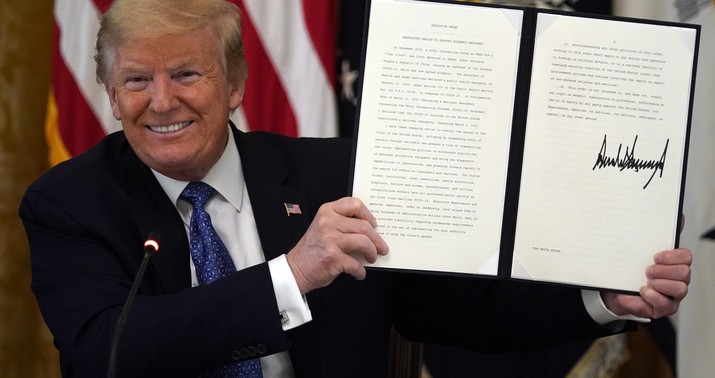 Earlier today Ed wrote about a concern that has spread among Democrats for several months that President Trump is gearing up to dispute the results of the 2020 election in the case that he loses. But Democrats have another fear that is worrying them according to a story published today at Politico. They worry that Trump might win the election thanks to a quick rebound of the economy.

The person stirring up that concern is Harvard professor Jason Furman who has been arguing since at least April that once the stay-at-home orders are lifted the economy will boom:

“We are about to see the best economic data we’ve seen in the history of this country,” he said…

Instead of forecasting a prolonged Depression-level economic catastrophe, Furman laid out a detailed case for why the months preceding the November election could offer Trump the chance to brag — truthfully — about the most explosive monthly employment numbers and gross domestic product growth ever…

Furman’s counterintuitive pitch has caused some Democrats, especially Obama alumni, around Washington to panic. “This is my big worry,” said a former Obama White House official who is still close to the former president. Asked about the level of concern among top party officials, he said, “It’s high — high, high, high, high.”

And top policy officials on the Biden campaign are preparing for a fall economic debate that might look very different than the one predicted at the start of the pandemic in March. “They are very much aware of this,” said an informal adviser.

Furman’s argument is that the coronavirus-caused downturn in the economy has more in common with a natural disaster than with the regular business cycle. For instance, a hurricane might shut down an area for a matter of weeks but the recovery tends to be fairly quick. Of course not everything will bounce back in this case. Many companies have gone out of business and some, like airlines and movie theaters, may take a while to recover. But the fact remains that there could be a big bounce from the very worst levels of unemployment we’re seeing now. And that bounce will allow President Trump to make the case that things really are on the upswing.

Another progressive quoted in the piece points out that Trump is still beating Biden on the economy even now. If we see a substantial recovery in the next few months, that could boost his numbers even futher and it’s no secret that a president in the middle of an economy perceived as good is more likely to be reelected. In this case, good will be relative but still.

A couple points about all of this. First, the concern of Democrats seems warranted but this puts them in a very odd position. On some level, they are rooting for a slow recovery to maximize their chances of taking the White House. They want the country to suffer long enough to replace Trump with Biden, who can then be credited for reviving the economy once he takes office. But rooting for failure is a pretty awkward position after a pandemic, especially when the candidate you’re rallying behind is “emo Joe,” i.e. the guy who cares. Rooting for failure, even temporarily, isn’t caring about Americans.

Second, if you look at this from the other side, it really is a potentially perfect scenario for Trump’s campaign. Not only can they genuinely celebrate any good news, this also puts the 2016 slogan back in play, albeit under unexpected circumstances. If you think about it, “Make America Great Again” was always going to be a problem for a second term. By that point you have to show that you’ve at least made some progress toward the goal (of making things great). But in this case, because of the virus, Trump can legitimately claim that his progress he made was undone by an unforseen disaster. Now he can argue he just needs time to recover what was lost. As a message, it’s a hell of a lot better than secretly hoping the downturn lasts through October.