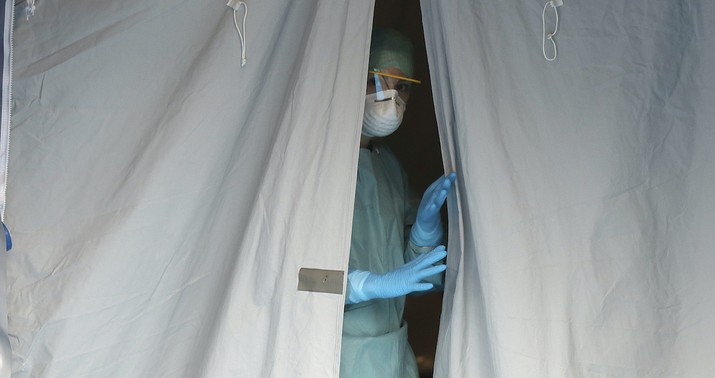 Officially, the coronavirus death toll in Italy is the highest in the world right now at 13,915. Italy has become synonymous with the worst case scenario when discussing the virus, but the Wall Street Journal published a piece yesterday which makes a convincing case the situation is Italy is even worse than it appears. Italy’s worst hit areas have seen hundreds of deaths that were almost certainly caused by the virus but which happened outside a hospital. Because those people weren’t tested and confirmed to have the virus before they died, they aren’t included in the tally.

In the town of Coccaglio, an hour’s drive east of [Milan], the local nursing home lost over a third of its residents in March. None of the 24 people who died there were tested for the new coronavirus. Nor were the 38 people who died in another nursing home in the nearby town of Lodi…

Nowhere in Italy has been harder hit than Bergamo, a city of about 120,000 people. In March 2019, 125 people died in the city. This March, 553 people died. Of these, 201 deaths were officially attributed to the virus. This leaves 352 further deaths for the period, far higher than normal.

In the wider Bergamo province, which comprises the city and more than 240 small towns and has a total population of 1.1 million, 2,060 people died in March from the virus, according to the official count. But some 4,500 more people died in the province in March than a year earlier, according to a new joint study by the local Eco di Bergamo newspaper and research firm InTwig that took data from 91 towns in the province…

“They are not receiving postmortem tests,” Eleonora Colombi, a family doctor based near Brescia, says of people who die outside hospitals, such as in nursing homes. “Many of those who die and aren’t tested are old, but you normally don’t have so many people all dying at the same time. It’s corona.”

The WSJ created several graphs to show the difference between the normal death toll in a given region (Bergamo in this case) and what Italy experienced this March. As you can see by comparing the bottom two bars in this graph, less than half of the excess deaths in the Bergamo region have been officially attributed to the coronavirus.

What all of this means is that the world’s worst case scenario may actually be much worse than we know. But there’s almost no chance the exact numbers will ever be known because most of the dead are being cremated as quickly as possible. So there may be no way to go back later to determine what caused these deaths.

At some point a more accurate estimate of the actual death toll from the virus will be made but by that point the information will come too late to help other nations gauge their reactions.

Finally, even if we did have more accurate information on the death toll in Italy, we still wouldn’t be able to estimate the death rate because we also don’t know how many people are infected. In Italy, the severity of the outbreak means that people without symptoms aren’t even being tested. So both the numerator and the denominator needed to accurately estimate the death rate are known to be inaccurate which is why estimates range from under one percent to much higher.