Dr. Fauci gets additional security because of ‘growing threats to his personal safety’ 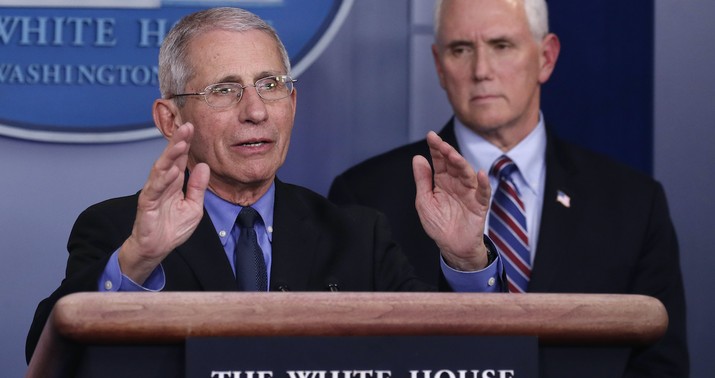 I didn’t see this one coming and apparently President Trump didn’t either. The Washington Post reported this evening that Dr. Anthony Fauci has received threats to his safety and is now receiving additional security.

Anthony S. Fauci, the nation’s top infectious-diseases expert and the face of the U.S. response to the novel coronavirus pandemic, is facing growing threats to his personal safety, prompting the government to step up his security, according to people familiar with the matter.

The concerns include threats as well as unwelcome communications from fervent admirers, according to people with knowledge of deliberations inside the Department of Health and Human Services and the Department of Justice…

Alex Azar, the HHS secretary, recently grew concerned about Fauci’s safety as his profile rose and he endured more vitriolic criticism online, according to people familiar with the situation. In recent weeks, admirers have also approached Fauci, asking to him sign baseballs, along with other acts of adulation. It was determined that Fauci should have a security detail. Azar also has a security detail because he is in the presidential line of succession.

Asked Wednesday whether he was receiving security protection, Fauci told reporters, “I would have to refer you to HHS [inspector general] on that. I wouldn’t comment.”

The president interjected, saying, “He doesn’t need security. Everybody loves him.”

Fauci is 79 years old and he looks to be about 5’7″. He’s the proverbial little old man so I can see how crowds of fans or people making threats are both a concern. The NY Times has previously reported that there was a group of people on the right who were unhappy with Fauci’s past support for Hillary Clinton.

In recent weeks, much of the online discussion of Dr. Fauci was benign or positive. Zignal Labs, a media analysis company, studied 1.7 million mentions of Dr. Fauci across the web and TV broadcasts from Feb. 27 to Friday and found that through mid-March, he was mainly praised and his comments were straightforwardly reported. Right-wing figures quoted Dr. Fauci approvingly or lauded him for his comments on shutting down travel to and from China, Zignal Labs said…

Anti-Fauci posts spiked, according to Zignal Labs. Much of the increase was prompted by a March 21 article in The American Thinker, a conservative blog, which published the seven-year-old email that Dr. Fauci had written to an aide of Mrs. Clinton.

The Post seems to be trying to connect this sort of criticism to the threats that prompted the new security arrangements. While I see the blog post from the American Thinker and agree it’s definitely anti-Fauci it’s also not making any kind of threats. This strikes me as the kind of lazy allegation left-leaning media loves to make, i.e. the climate of hate. But expressing a negative opinion about a public figure on a blog or on Twitter isn’t a crime. And if some people are making threats, those individuals are the problem, not a group of people expressing what appears to be a minority opinion online.

But again, the left is fond of this kind of argument where people who criticize a public figure are suddenly responsible for someone who goes too far. They never seem to make this connection when someone on the right is receiving threats amid a backlash from the left. Trump undoubtedly gets more death threats than anyone on the scene yet you never hear concern that The Resistance is responsible. The media doesn’t seem to see that as a possibility.

To be clear, I like Dr. Fauci and Dr. Birx. I think they’ve both been a good influence on President Trump including recently helping to persuade him he should extend the shutdown guidance a couple more weeks. But people are free to disagree and to say so. That said, I hope if there are some genuine nuts out there that they knock it off and start acting like adults.