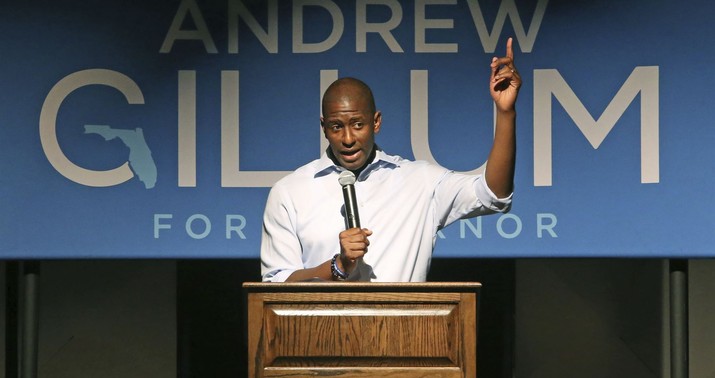 Ed wrote about Andrew Gillum’s surprising turn on Friday. Police were called to a Miami Beach hotel room where one man was experiencing a crystal meth overdose. When police arrived after a 911 call, Gillum was discovered throwing up in the bathroom. When officers tried to talk with Gillum they found he was “unable to communicate.” Sunday, Gillum announced he was withdrawing from public life and would be entering rehab for alcoholism:

“This has been a wake-up call for me,” the former Tallahassee mayor said in a written statement Sunday. “Since my race for governor ended, I fell into a depression that has led to alcohol abuse. I witnessed my father suffer from alcoholism and I know the damaging effects it can have when untreated. I also know that alcoholism is often a symptom of deeper struggles.“

“I will be stepping down from all public facing roles for the foreseeable future,” he wrote.

Gillum said he would enter a rehabilitation facility. He apologized and asked for privacy…

He also is stepping back from CNN, where he was paid commentator, a gig that made him a familiar face in the living rooms of voters.

In his initial statement to the media Gillum said, “I was in Miami last night for a wedding celebration when first responders were called to assist one of my friends.” That was apparently true. In fact, Politico reports he was supposed to officiate at a wedding but “was a no-show.”

The friend who overdosed in the room with Gillum was Travis Dyson. Dyson apparently advertises himself as a gay escort. He had been given a credit cart to rent the hotel room where he overdosed by the third man who was in the room, Aldo Mejias. Mejias is the person who rendered aid and called 911 when Dyson collapsed. After being treated at a local hospital Dyson told the Miami New Times that he wasn’t there for a wedding:

“I personally was not celebrating a wedding. I don’t know if [Gillum] was in town for a wedding. He did not mention that,” Dyson said.

Dyson said he has known Gillum since around last spring.

“We’ve been friends for a while,” Dyson said. He then went silent on the phone and did not answer subsequent calls from New Times.

Gillum has not been charged with any crime in relation to the incident. However, there are some reports that police who arrived at the scene were wearing body cameras. So it’s possible that video of Gillum from the hotel room could be released at some point. As much as I’m not a fan of Gillum or his politics, he does have three young children and I feel sorry for them in this situation.