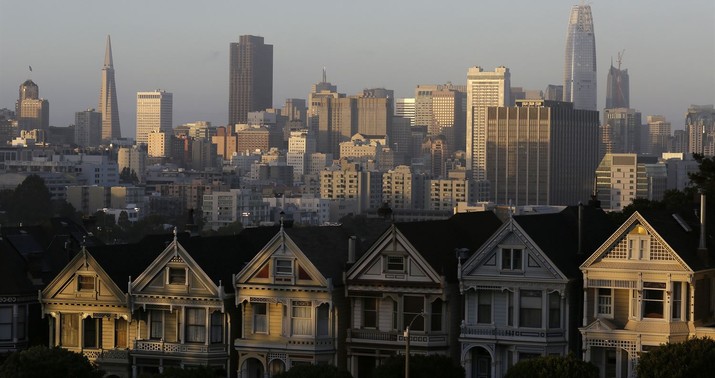 A San Francisco progressive housing group called Todco promoted a ballot proposition which would tie the creation of new office space in the city to construction of new housing. The final tally isn’t in yet but it appears Prop E might pass.

Proposition E, which would tie allowable office construction to the amount of affordable housing built in the city, was ahead 55% to 45% with 100% of precincts reporting. The measure needs a simple majority to pass, but an unknown number of mail-in ballots were still outstanding…

“The commercial sector is growing so fast because of the boom,” John Elberling, executive director of Todco, previously said. “We’re not keeping up with the housing needs of all the new workers that are flooding into the Bay Area.”

So what happens if Prop E passes? According to the city’s chief economist, it would lead to rising office rents and a significant hit to the city’s economy:

“By further limiting office development in the face of strong demand, (Prop. E) will drive up office rents, making office space less affordable for tenants, and pricing out those employers who are unable to afford rising rents,” it said. “This will lead to a reduction in the size of the city’s economy, the city’s population and income, and employment base, relative to a baseline projection, over the next 20 years. The impact will be especially, but not exclusively, felt in office-using sectors.”

After 20 years, the economic impact would be an 8.5% reduction in the city’s gross domestic product, or $23 billion in today’s dollars, it said. Disposable personal income would be 5.9% less than otherwise expected, and the population would be 5.8% smaller. Total employment would fall by 7.9%, or 91,000 jobs in 2040, from the projected figure.

Critics of Prop E see it as a potential disaster because it won’t actually do anything to remove regulations that prevent new housing construction, nor will it allocate new funds for housing.

And it’s not as if developers don’t have other options nearby. Will moving new commercial development to Oakland somehow help develop housing in San Francisco? The Chamber of Commerce calls it a no-win scenario:

“The effect of this ballot measure will be to shift offices out of the city, but leave the housing crisis with us. But we will no longer have any of the revenue to address it,” said Jay Cheng, the chamber’s public policy director. “The end result of Prop. E will literally take money out of people’s pockets. It’s really a no-win scenario.”…

The one thing everyone, including the city’s big developers, agrees on is that Prop E will be great for landlords who can expect to see already sky-high rents ascend even higher. The shortage of office space created by Prop E with cause prices to rise until only the largest companies can afford to remain. Meanwhile the city’s non-profits and small startups will be priced out.